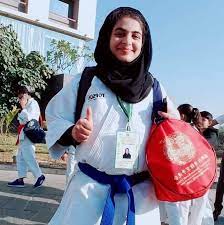 SRINAGAR: The Third Additional Munsif Judicial Magistrate Srinagar Thursday granted bail to the international athlete Nighat Bashir in a case filed against her at the police station Shergari stating that “she was not a habitual offender.”

The learned counsel Advocate Tashveeq while pleading for the bail before the Third Additional Munsif Judicial Magistrate in Srinagar stated that the applicant (Nighat Bashir) is innocent and is not involved in any crime or offense and has been arrested without any cause or justification.

The learned counsel pleaded that the applicant has been arrested under FIR number 83/2021 at Police station Shergari for offenses under section 332 of the Indian panel code (IPC).

Filing the objections, the learned APP said that police in the report have stated that investigation has been concluded and nothing further remains for the same in this regard.

“The prosecution has no objection in case the applicant for bail is allowed on the ground and if the accused undertakes to face the trial without remaining absent as and when the charge sheet is filed in the court for judicial determination”, the learned APP said.

According to the order a copy, the court in response to the bail application said that “Keeping in view the facts and circumstances of the case, the discussion made hereinabove and the fact that the offense for the commission of which the applicant / accused has been arrested is neither punishable with a death sentence, nor imprisoned for life, and also accused person herein not being a habitual offender as no such objection has been taken by the prosecution, the court is taking the lenient view and applicant/ accused person is admitted to interim bail up to 25-09-2021 in FIR number 83/2021 of PS Sherigari, Srinagar for offenses U/s 332 of IPC subject to the furnishing personal bonds to the tune of 25,000 from her with one surety of like amount.

The court also said that surety bonds as mentioned above have been furnished, attested, and made part of the instant application. “Accordingly SHO P/s Shergari, Srinagar is directed to release the applicant / accused person in case FIR No. 83/2021 of P/s Shergari Srinagar for offenses U/s 332 of IPC after obtaining personal bonds to the tune of Rs 25,000 from her provided that the applicant / accused is not required to be detained in any other case or FIR put up on 25-09-2021”, the court said—(KNO)