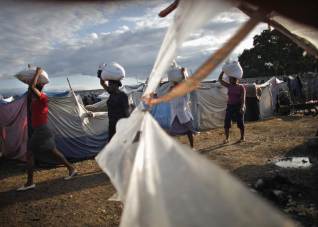 LONDON: Technology that helped catch a U.S. serial murderer, dubbed the Golden State Killer, could be used to track down aid workers who sexually abuse girls and women overseas, according to the team behind a groundbreaking project in the Philippines.

In abuse cases which result in pregnancy, scientists say DNA could be taken from the child with the mother’s consent and uploaded to a genealogy database to trace the father.

The technology has been made possible by the popularity of commercial genealogy services which now hold DNA data on millions of people keen to explore their ancestry.

“I’m really excited about this because now we can start holding some of these men to account,” said Andrew Macleod, a former U.N. worker and lawyer who is spearheading the project.

“We’re not just talking about people who rape a child at gunpoint, but also civilian western aid workers who manipulate the starvation faced by a family to gain sex.”

The aid sector was rocked by reports in 2018 that Oxfam staff paid women in Haiti for sex while helping survivors of the 2010 earthquake, but humanitarian experts say sexual abuse happens across the industry and has been hushed up for decades.

In the Philippines pilot project, the team identified several men who had fathered children while visiting or working in the southeast Asian country by using genetic genealogy, which combines DNA analysis with traditional document searches.

Although most of the men traced were probably sex tourists, Macleod said the technique could be transferred to the aid sector, potentially leading to criminal prosecutions, compensation for victims and child support orders.

“For decades the U.N. has parroted the words ‘zero tolerance’, but not much has changed on the ground. The U.N. and large aid agencies should champion this technology to change words into action.”

U.N. peacekeepers have been accused of sexual violence and exploitation in countries including Liberia, Central African Republic (CAR), Democratic Republic of Congo (DRC) and Haiti.

But contrary to popular perception, more reports of abuse are made against civilian U.N. staff than peacekeepers.

Abuse allegations are often difficult to investigate because of lack of evidence, but Macleod said he had “a lightbulb moment” when he heard about the Golden State Killer case, which was solved using genetic genealogy.

Detectives in California investigating unsolved murders and rapes from the 1970s and 80s uncovered the killer’s identity using DNA from crime scenes to create a genetic profile which they uploaded to genealogy database GEDmatch.

This allowed them to create a genetic family tree which led them to ex-policeman Joseph DeAngelo, who has since admitted 13 murders and dozens of rapes and will be sentenced in August.

Macleod’s initiative brings together experts from Hear Their Cries, geneticists at King’s College London and lawyers from British legal firms Griffin Law, where Macleod is a non-executive chairman, and Dawson Cornwell.

In the Philippines trial, DNA was taken from children born to five women who said the fathers were foreign nationals. The mothers all live in poverty in the slums of Angeles City, northwest of Manila.

One of the men traced, an American who used to live in the Philippines, was ecstatic to discover he had a son and has promised to support him.

But Macleod said another man had denied paternity, although his family accepted the result, while a third has refused to communicate with him.

Investigators have narrowed the fourth father’s identity down to two Australian brothers. The fifth is still being traced.

Macleod said legal action would be taken against fathers who refused to support their children.

None of the women involved in the first trial were underage, but the team is now running a follow-up trial with a woman who became pregnant when she was 14.

If the father is found, it could lead to criminal charges, potentially paving the way for similar prosecutions of aid workers who abuse minors.

Laws in Britain, Australia, Canada and the United States allow nationals to be prosecuted at home for child sex crimes committed overseas.

The increasing popularity of genealogy databases with people wishing to trace their ancestry has raised privacy concerns and questions around how their DNA might be used in the future.

Denise Syndercombe Court, a forensic geneticist at King’s College London, said the children’s DNA would only be on GEDmatch for a short time, would have no name attached and would be destroyed afterwards.

The technology has its limitations as most data on genealogy databases relates to people of European ancestry, making it less useful for tracing peacekeepers or aid workers from Asian and African countries.

However, Syndercombe Court said even if individual fathers could not be traced, DNA tests could indicate the countries they came from, increasing pressure on their governments to act.

Macleod is briefing the United Nations and British and Australian governments about the project.

Jane Connors, who was appointed by U.N. chief Antonio Guterres as the global body’s first victims’ rights advocate as part of a new strategy to tackle sexual abuse in the sector, said she was interested in learning more about the initiative.

British lawmaker Pauline Latham said she would push her government to fund an expansion of the programme.

“Paedophiles actively seek out jobs in the industry,” she added. “These people think there are no consequences … This might make them think twice.”

Some campaigners say the problem is even bigger than the sex abuse scandal in the Catholic Church.

“I’d say we’re with the aid industry exactly where we were with the Catholic Church in the 1970s,” Macleod added.

“We’re just beginning to understand the size of the tiny tip of the iceberg.”