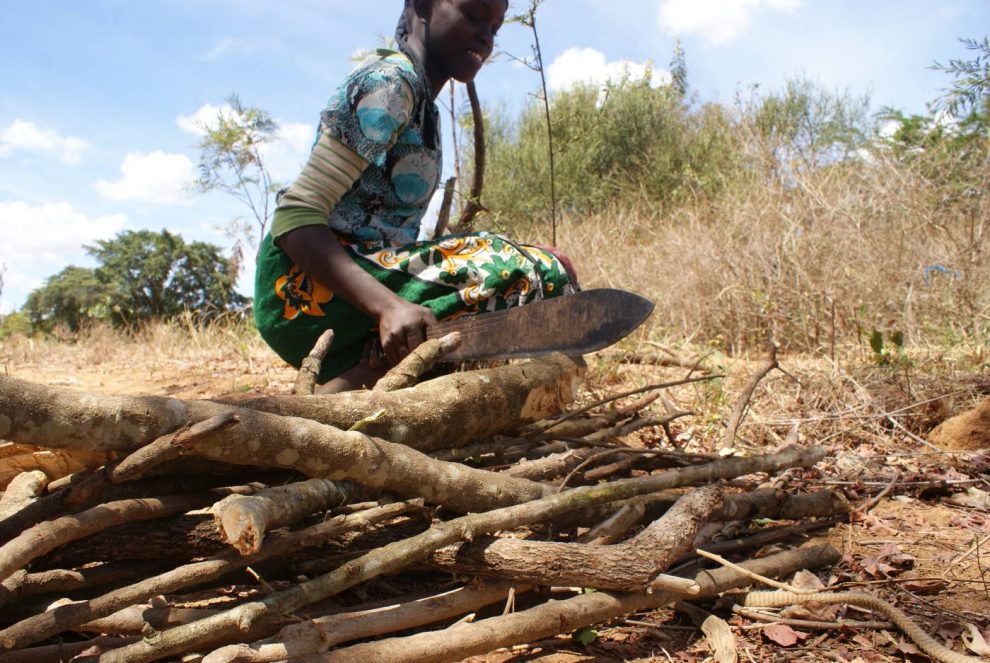 NKUTHIKA, Kenya: After selling another bundle of firewood to his latest customer, Augustinoa Kinyua whistled as he made his way back to the spot where he had been preparing his field for planting.

Usually, Kinyua supports his family by growing and selling crops such as maize, beans and bananas on his farm in the central Kenyan village of Nkuthika.

But these days, he finds there is more money in firewood, as families hit by the economic impact of the coronavirus pandemic turn away from natural gas toward more affordable, readily available wood for cooking and heating their homes.

“My customers tell me they prefer using wood fuel rather than cooking gas because firewood is cheaper,” the 42-year-old farmer said. “This is why I have entered the firewood business.”

With families tightening their budgets, firewood sales are booming in Kenya, a trend that officials say will make it harder to reach a national goal of having at least 10% of the country covered by forest by 2022.

Currently, 7% of Kenya is forested – and environmental groups say more than 5 million trees are cut down every day for firewood, charcoal or other purposes.

“The rising use of firewood is a sign that the country is deviating from its green growth pathway,” Keriako Tobiko, cabinet secretary for the Ministry of Environment and Forestry, told the Thomson Reuters Foundation.

Kenya’s unemployment rate has almost doubled since the start of the pandemic to more than 10%, according to the latest government statistics.

Struggling families are switching to wood and charcoal, which are cheaper and more accessible than other fuels such as liquefied petroleum gas (LPG), said Nelson Muiru, director of Kijabe Environment Volunteers, a local charity.

Many Kenyans who can no longer afford fresh meat and vegetables are eating more maize and beans – foods that take longer to cook and so require more fuel, Muiru explained.

“These meals cost more for a family to make using LPG and electricity compared to when they are using firewood,” he said.

Wood has long been the primary source of fuel for Kenyans, with 90% of rural households using firewood for cooking and heating, according to the energy ministry.

But gas has been gaining ground over the past decade.

More than 13% of households have been using LPG as their main source of energy for cooking in recent years, over double the number in 2009, according to the latest Kenya Integrated Household Budget Survey.

LPG vendor Collins Gitau told the Thomson Reuters Foundation he used to sell more than a dozen cylinders a week from his stall in Mugutha village, central Kenya, before the pandemic.

These days, however, he barely manages to sell five a week.

“I feel cheated by the pandemic,” Gitau said. “Many (customers) want me to supply them on credit. I cannot do that because it is my business that will collapse.”

While business has slowed for household gas traders, the sudden shift to firewood has unlocked new opportunities for farmers like Kinyua, who said he can make about 5,000 Kenyan shillings ($46) every week selling firewood.

It has also been a boon for companies selling clean cooking stoves, which are more efficient than traditional stoves and produce less smoke pollution and fewer planet-warming emissions.

Peter Scott, chief executive officer at BURN Manufacturing, a social enterprise that makes and distributes clean cooking appliances, said it sold about 50,000 stoves per month in Kenya in the second quarter of 2020, double sales in the same period last year.

“Since COVID-19… we are doing better than expected,” he said in a statement, adding the company was now scaling up operations in several other African countries.

Veronica Wanja, a mother of three in the village of Kinoro, in central Kenya, bought a clean stove earlier but only started using it once the pandemic hit and she could no longer afford to buy gas for cooking and heating her home.

The stove allows her to get more out of wood fuel than when she uses her home’s hearth, said Wanja, 34.

“I used the clean cookstove to warm my sitting room where my children were studying, to prevent them from becoming vulnerable to the virus during the cold months,” she said, standing outside near trees that had recently been pruned to feed the family’s wood pile.

People are not only cutting down trees on their own land as a supply of cheaper fuel.

COVID-19 restrictions that ban group gatherings have made it difficult for activists to keep watch over conservation areas, opening the way for loggers to sneak in, Kamonde said.

“Forests that border major urban centres have continued to face the greatest risk of encroachment. The government must act swiftly to stop these illegal activities,” he said.

It also set up a stimulus fund of a billion shillings (about $9 million) to help with conservation efforts during the pandemic, he said.

Beyond COVID, noted Tobiko at the environment ministry, the government is working to conserve trees by encouraging Kenyans to swap firewood and charcoal for biogas, which is produced from agricultural and other biological waste.

Counties are also being asked to establish tree nurseries to make saplings available to more farmers for planting, he added.

“The aim of the government is not to completely stop the use of firewood because there are poor Kenyans who still rely on it,” Tobiko said.

“The focus is on enlightening Kenyans as to why rural families stand to gain more by using renewable energy.”