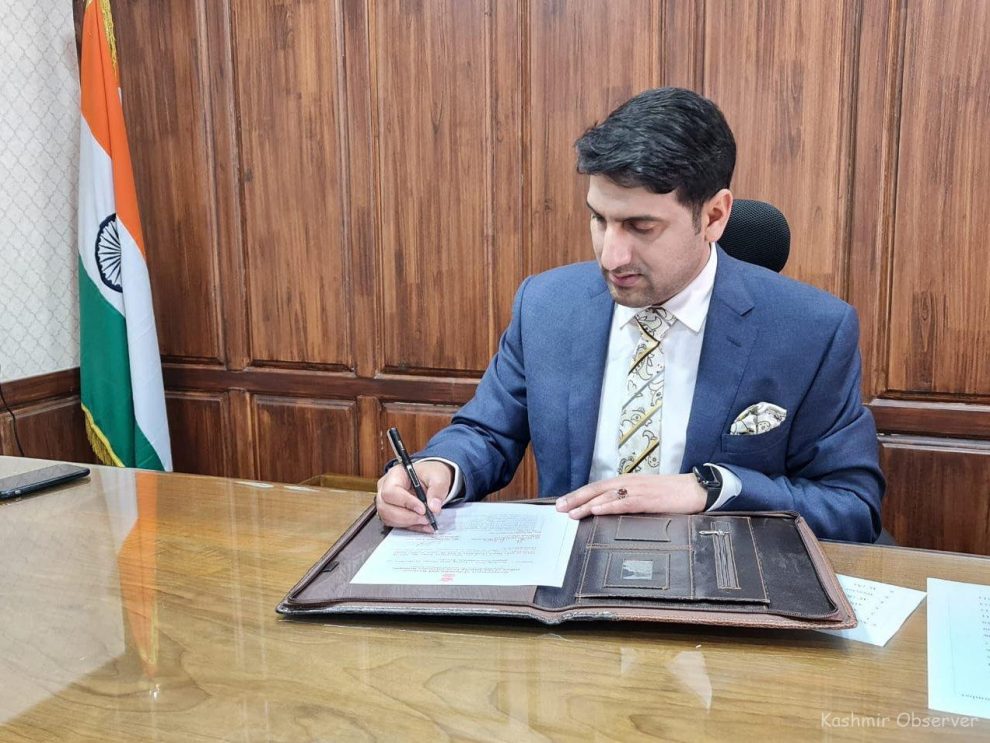 Standalone shops, transport with 50 per cent seating capacity to be allowed to ply during lockdown period, appeals people to stay indoors

SRINAGAR, APR 29: Hours ahead of Corona Curfew will be imposed, the Deputy Commissioner (DC) Srinagar; Muhammad Aijaz Asad on Thursday said imposing curbs and following Standard Operating Procedure (SOP) should not be considered as a punishment, saying that all these measures are being in the interests of the people and are need of the hour.

He also said that lockdown at this juncture was imperative to break the transmission chain.

Addressing media persons here at his office, DC Srinagar said that transport with 50 per cent seating capacity will be allowed to ply during the lockdown period from Thursday evening to Monday morning. He said the decision to allow public transport to ply has been taken for the people who don’t have their transport and have to reach the hospitals or other related places.

“Allowing transport to ply is not an invitation for the people to come out, but the decision was taken for the wellbeing of the people who will have to reach the hospitals or other related places,” he said.

He also added that during the lockdown period, the standalone shops shall remain open while restaurants in the hotels shall remain open for in-house guests only. He also stated that the food to the guests will be served in rooms.

“There shall be no hindrance to the smooth movement of goods and essential supplies, nomads migrating with herds, Darbar move official staff, Agriculture and horticulture goods. Also, there shall be no restriction on inter-state and inter districts movement of essential goods,” he informed, adding that the industrial establishments will remain open.

Also, he said there shall be no restriction on the movement of government officials on production of identity cards, adding that developmental construction works will continue while necessary measures will be taken in this regard.

He also informed that the vaccination drive will also continue normally at designated Centres.

However, he said that all shopping complexes, saloons, restaurants, gyms, bars and parks shall remain closed.

According to KNO Correspondent, he said that the religious and social gatherings such as marriages attended by 50 per cent only whether indoor or outdoor is permissible. He also said that in funerals, only 20 people will be allowed to participate.

“I appeal to the people to stay indoors,” he said.

About spike in COVID-19 cases in the district, DC said that Srinagar being the capital is being visited by people from other places, thus witness a huge and rush, which is why the cases are higher in the district as compared to other places—(KNO)

The Dispatch is present across a number of social media platforms. Subscribe to our YouTube channel for exciting videos; join us on Facebook, Intagram and Twitter for quick updates and discussions. We are also available on the Telegram. Follow us on Pinterest for thousands of pictures and graphics. We care to respond to text messages on WhatsApp at 8082480136 [No calls accepted]. To contribute an article or pitch a story idea, write to us at [email protected] |Click to know more about The Dispatch, our standards and policies
Tags#thedispatch #Covid-19#Srinagar.

Lockdown begins in 11 distts, curfew will imposed in other districts from tomorrow
Centre advises J&K against dropping car parking projects under AMRUT
Comment