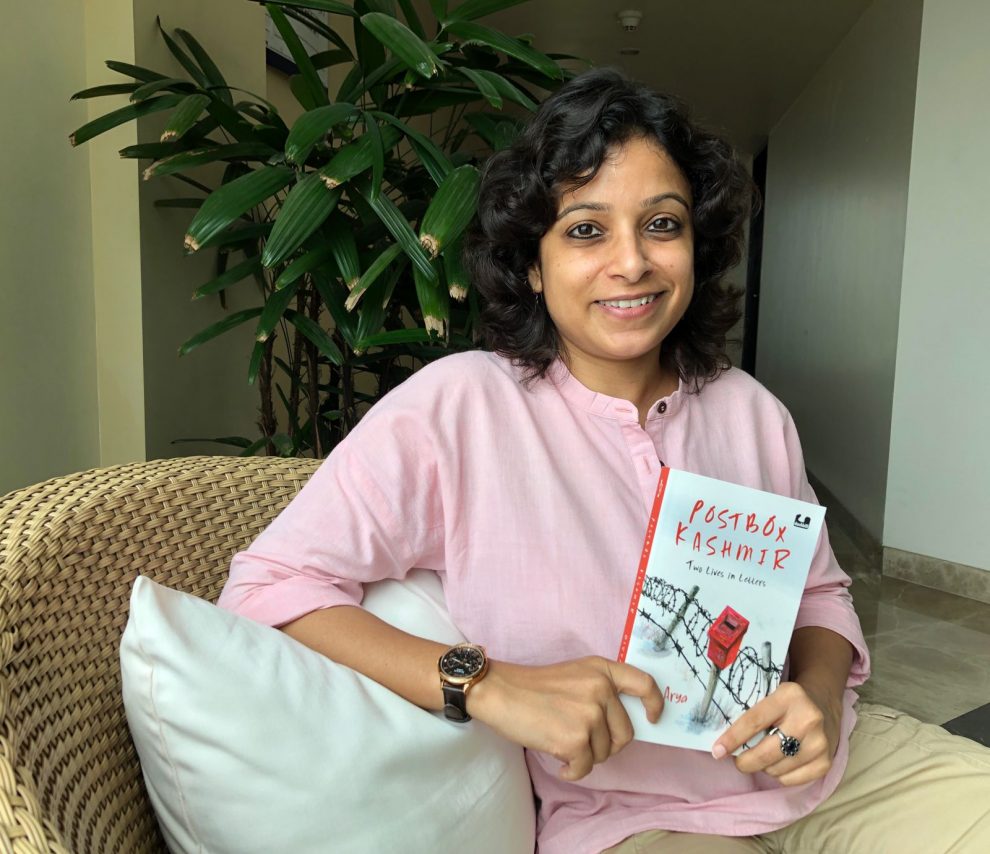 Finding my letter writer in Delhi was a pleasant accident. I hadn’t really started looking at that time. On a completely different mission, one winter afternoon in February 2017, I found myself at Saumya’s house. It was books that led my husband and me there. Both of us, he way more than me, are guilty of hoarding books. And now, a carefully built selection of over fifteen years needed a new purpose. Our search for a library, where we could part with our much-loved treasures knowing they will be equally valued, was what led us there.

It was a cosy unassuming two-bedroom flat in a colony in outer Delhi. Saumya’s parents ran a small library-cum-reading room from an even smaller space on the floor above. They could have rented it out to supplement their income, but decided to use it to work with schoolgoing children by providing them a place to come read. As the name suggested, Umang Library was to spread the simple ‘joy’ of immersing in the written word, to give wings to young imaginations. We were inspired with what we saw and went back down three floors to make multiple rounds, heaving cartons full of books up a narrow, broken staircase.

Saumya didn’t speak much at that time. She quietly helped with the unpacking and laying out of books, stopping only to peer at some titles from behind her thick spectacles. She was fifteen years old and preparing for her Class X board exams. We didn’t talk about Kashmir.

A few weeks later, when I started the search for my letter writers, I recalled the shy young girl from that winter afternoon. The more I thought about it, the more she seemed to be the perfect fit. A couple of phone calls later, it was done. Saumya Sagrika was waiting to get her first letter.

In Kashmir, the situation was very different. I had never been there, I had no family there and very few friends. As I started making calls, finding connections and building bridges to reach out to parents, it became very clear that the biggest hurdle was going to be trust. It was the casualty of decades of conflict. Entering into anyone’s circle of trust is always difficult, but on some days, it seemed unsurmountable. Thephysical distance, lack of confidence that a personal meeting could build, all added to the challenge.

In 2017, there were visible strains of pain and anger. The violent autumn after Wani’s encounter had quietened as snow covered the streets in the Valley. But the cold seeped in through the telephone line from the other side when I tried to explain our project. The memories were very raw. There was a strong belief that the momentous upheaval led by young people was going to change something. The rage was still simmering. At that time, when opinions, borders and beliefs had a razor-sharp edge to them, my offer of a quiet conversation over letters seemed suspiciously innocuous tothe parents on the other end of the phone call.

But I persisted, not losing hope. Days turned into weeks, which turned into months. And finally, a door opened just a crack. My request had landed at fifteen-year-old Duaa’s doorstep, with just a recommendation from an acquaintance trusted by her family, holding this together.

Duaa’s father had a gentle demeanour. We discussed the project a little and then some more. But we spent a lot of time trying to know more about each other. Me and my family and Duaa and hers. The conversations with her parents were never rushed and always began with courtesies that extended to my parents, my husband and his family. This was my lovely introduction to Kashmiri tehzeeb (etiquette). As trust grew, the anxieties became more honest too. And some stemmed from what had happened to another Kashmiri teenager.

Sixteen-year-old Zaira Wasim was the young star of the hugely successful Bollywood film, Dangal, released in December 2016. In January, when she returned to her hometown, Srinagar, and got photographed with then chief minister Mehbooba Mufti, it caused a storm on social media. Zaira was criticized for the photo op; people said she should have met victims of pellet gun firing instead. Some saw it as taking sides. Was she for the government and against the protestors? Or could this just be an innocent gracious acceptance of appreciation? Zaira Wasim issued an open letter with an apology via her Instagram handle. She later deleted it but not before it got widely reported in national news media. Zaira did get support too, many pointing out how young she was, but the fine line that needed to be treaded in Kashmir, even by a teenager, just became even more thin.

When I was growing up, my mother introduced me to the idea that ‘personal is political’. The slogan, which has its roots in the feminist movement, has stayed with me. That our personal lives cannot be alienated from our politics. And that our personal life inside our home, has a political context. For a journalist who has to always work hard to be balanced in her writing, this acute political consciousness has been sobering as well as illuminating. A challenge one has to rise to every time.

In Kashmir, this slogan takes a much deeper hue, the shadow of which can be unsparing. Duaa’s mother feared that her daughter would not be able to walk the tightrope. Or that what she wrote, could get lost in translation. We gave ourselves some more time, a few more conversations. And a promise that we would publish whatever her daughter wrote, without any editing. Because we believed we had chosen with care. I imagined it as a teenager’s diary, hoping to find an unbridled innocence and honesty. It was a give and take. I was putting my faith in them and they were giving me their trust. Eventually, I got an invitation to stay with them in their house whenever I planned to visit Srinagar. It was a sign, they were ready.

This is their story.

Excerpted with permission from Postbox Kashmir, Divya Arya, Penguin India. Read more about the book here and buy it here.

This book showcases Wajida Tabassum’s boldest short stories, translated for the first time from Urdu into English
The book “The True Self” by Lokesh Babu is a timeless journey of philosophical teachings
Comment