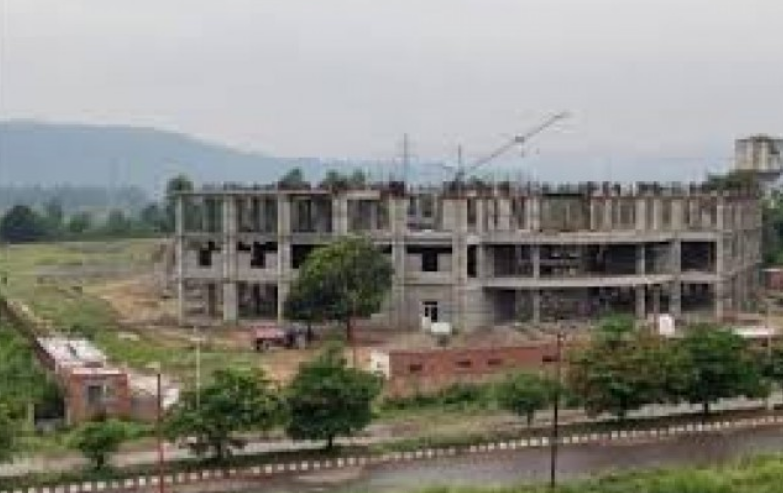 Almost half of the construction work of north India’s first Industrial Biotech Park being set up in Kathua district’s Gatti has been completed and the work is in full swing to complete the project as soon as possible to help farmers in the region.
OP Bhagat, Deputy Commissioner Kathua said that the park which is being constructed at the cost of Rs 45 crores will provide space to any scientist who wants to do research in the interest of farmers.

“MoS Jitendra Singh gave two projects (Industrial Biotech Park) one in Srinagar and one in Kathua. The foundation was laid in 2014 and the construction work started in 2018. The worth of this project is Rs 45 crores. 50 per cent work of the park has been completed and only finishing has left. The park will be beneficial for farmers as well as researchers.
“Any scientist who wants to research in the interest of farmers then Industrial Biotech Park will provide him or her space and technical know-how. They can sow medical plants and others for their research,” he said.

Vickey Sharma, Sarpanch, Panchayat Nagrota said that the park will help in generating employment in the region.
“This biotech park is being set up around 2 kilometres from our panchayat in Gatti. This will be the first park in north India. I think our youth will get employment and generate employment in industries at the local level,” he said.
Gyan Singh, a local said that the construction of the park may be completed in the next two years.
“The construction of the park is in full swing. We are hoping that it will be completed within two years. It will generate employment and will do the marketing of our local products. There are several medicinal plants in our area, people will be able to research,” he said.
In September, Minister of State, Prime Minister’s Office Jitendra Singh reviewed the north India’s first Biotech Industrial Park project at Kathua.

A month earlier, Singh, Lok MP from Udhampur said that the construction work of the park was delayed to COVID-19 and it is now nearing completion.”Current status of work going on despite #Lockdown, to set up North India’s first-ever Biotech Industrial Park at #Kathua, #JammuAndKashmir. Nearing completion, delayed due to COVID,” Singh tweeted on August 23, 2020

Mehbooba Mufti Alleges She Is Illegally Detained At Srinagar Residence
Efforts are being made for the early repatriation of 2 minor sisters who crossed the LoC:Defence Spokesperson
Comment