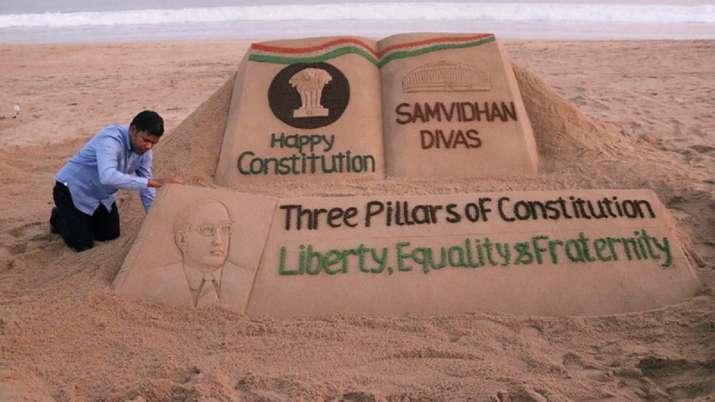 India celebrated its Constitution Day on 26 November in the Central Hall of Parliament in the midst of multiple problems — political, social, and economic. It was a day to rejoice over the  successful functioning of our Constitution that was adopted this day in 1949, whereas several ex-British colonies and many others have gone through constitutional crises, overthrow of Constitutions and adoption of  new ones even periodically.

Notwithstanding the boycott of the national function by 15 Opposition political parties as a routine exercise, the Day has acquired national significance like Independence Day and Republic Day as it has been declared as the Constitution Day in  2015. It was the 125th birth anniversary year of Babasaheb Ambedkar, the Chairman of the drafting committee of the Constitution, revered as the architect and as Father of the Constitution. The aim in celebrating the Day is to raise awareness about the Constitution and promote constitutional values among citizens of this country.

The US Constitution Day is celebrated also as Citizenship Day on 17 September to commemorate the signing of the Constitution in 1787 and recognise those who have become American citizens. It is observed as the Day to remember and  reflect  on the rights and responsibilities of citizenship and what it means to be a US citizen.

The nation is going through numerous challenges from internal and external sources and also from natural causes like enormous flood and deadly pestilence that it can hardly afford time to  enjoy its hard won achievements. Therefore, without ending with formal celebrations, we should  quickly and sincerely rededicate ourselves to uphold the letter and spirit of the Constitution and  the values embedded in its provisions. As Prime Minister Modi said, the Constitution is “our  greatest strength to remove obstacles being created by colonial mindset”.

“Colonial mindset” refers to the attitude of  developed nations to impede India’s development  by putting hurdles in its growth. Colonial mentality is to discourage and even oppose independent thinking and achievements of their subjects so as to keep them servile and subordinate. It leads to internalisation of an attitude of ethnic or cultural inferiority in the people.  It is evident in subjugation of language and cultural values of a people which leads to    acceptance of inferiority and blind submission to colonizers by the colony.

It is unfortunate that there are groups in our country that deride our own culture and misrepresent them at home and abroad and thus put barriers in our development. Modi tried to bring home the  significance  of our Constitution in overcoming obstacles in our progress and development. It necessarily means sticking to our constitutional values at any cost which are facing threats   internally and externally.

The term “values” used in plural connotes one’s principles, ideals, or standards, which flow from one’s judgement about what is  important in life. These denote the qualities or principles viewed  and  felt  as necessary and desirable and worth  preserving at any  cost. Values  are cherished by the holders who may be individuals or groups and communities or even systems and  institutions.

There is no basis to think that values are always abstract and lofty beyond relevance to everyday requirements, difficult to maintain, and are spiritual and non-material. For, everything in the world —  structures and institutions, beliefs, customs and practices, political, social, economic systems and cultural forms, legal and judicial systems, rights and privileges, goals and  ambitions, etc. —  are based on certain values and principles commonly known as objectives  and purposes.

Values  are  not specified or defined; these are understood and respected and cannot be measured in economic terms  or by practical utility. Those who are conscious of the hidden values absorb  these and are certainly different from those who are not.

The occasion was used by Modi to emphasise the importance of inner party democracy for protection of democracy in the country. He lamented that the spirit of the Constitution is endangered when political parties lose their democratic character. His reference was particularly to family dominance in some political parties. He did not name any party, but in India, hereditary leadership in political parties has become common and even acceptable to the masses.

The term “political parties”  does not figure in the Constitution until the insertion of the Tenth Schedule on Defections. However, parties existed in anticipation of elected representative government even before India became independent. A  look  at  the  historical account  of parties comprising their inception, structure and organisational set up, their constitution, rules, regulations  and  procedures  and  their  functioning, growth,  ideologies, activities, and  interrelations  with  others,  shows how  the values  stuffed into  the Constitution  are valued by   active players in their own  organisations. Modi hinted clearly that inner party democracy  is sine  qua non  for democratic role in governance.

Political parties are not the only actors on the political stage to adhere to constitutional values which ought to be followed by every citizen.  Actors like castes, communities, religious groups, professional groups, labour unions and civil society organisations have openly emerged to demand as well as to block legislations by the elected. Parliament is not the only place to generate legislations. They are pushed even on roads. All these may be acceptable provided the  letter  and spirit  of the Constitution are obeyed and constitutional values are safeguarded.

At the same  time, it is also true that no constitutional document anywhere in the world may be    cited as perfect, suitable for all times for even the country for which it is framed. We may recall the upright confession by the Fourth American President James Madison regarding  the US Constitution that, “I am not one of the number who think that the Constitution lately adopted a faultless one”. He was instrumental in drafting the American Constitution and also about ten amendments including the most important Bill of Rights.

At the time of framing the Indian Constitution, Jawaharlal Nehru made a similar observation  that, “While we want this Constitution to be as solid and permanent as we can make it, there is no permanence in Constitutions”. This is validated by over 100 amendments that the Constitution of India has undergone in 71 years. Whether Nehru said this to expedite the drafting of the  Constitution or as a pragmatic suggestion, it was not meant to devalue the values then or now.  Amendments  are  to  reinforce  ideals.

In any case,  the basic structure remains unaltered and is also made unalterable by a verdict of the Supreme Court. This basic structure stems from certain values that pervade the entire Constitution. The Preamble, The Directive Principles, and the Fundamental Rights convey the  values embedded in the Constitution.

There are many variants of democracy which are equally legitimate and we have adopted representative parliamentary democracy based on universal adult suffrage. Electoral mandate based on the accepted system has to be respected and allowed to run its course. How unruly disruptions can be accommodated  as normal parliamentary  proceedings which should be the first to promote constitutional values is indeed a cause to worry on this Constitution Day.