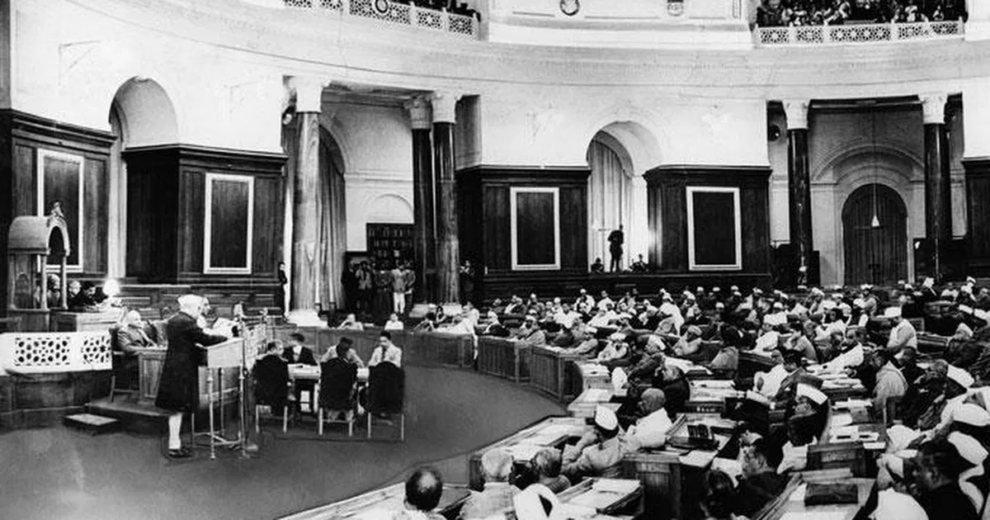 The Constituent Assembly of India, consisting of indirectly elected representatives, was established to draft a constitution for India. It existed for close to three years, the first Parliament of India after Independence. The Assembly was not elected based on universal adult suffrage, and Muslims and Sikhs received special representation as minorities. The Muslim League boycotted the Assembly after failing to prevent its creation. Although a large part of the Constituent Assembly was drawn from the Congress Party in a one-party environment, the Congress Party included a wide diversity of opinions—from conservative industrialists to radical Marxists, to Hindu revivalists. The Assembly met for the first time in New Delhi on 9 December 1946, and its last session was held on 24 January 1950.

The idea for a Constituent Assembly was proposed in Dec 1934 by M. N. Roy, a pioneer of the Communist movement in India and an advocate of radical democracy. It became an official demand of the Indian National Congress in 1935. The Indian National Congress held its session at Lucknow in April 1936 presided by Pt. Jawahar Lal Nehru. The official demand for Constituent Assembly was raised and Government of India Act, 1935 was rejected as it imposed the Constitution which was against the will of the Indians. C. Rajagopalachari voiced the demand for a Constituent Assembly on 15 November 1939 based on adult franchise, and was accepted by the British in August 1940.

The Jammu and Kashmir State which acceded to the Union of India in October 1947, had following four members in the Constituent Assembly of India: