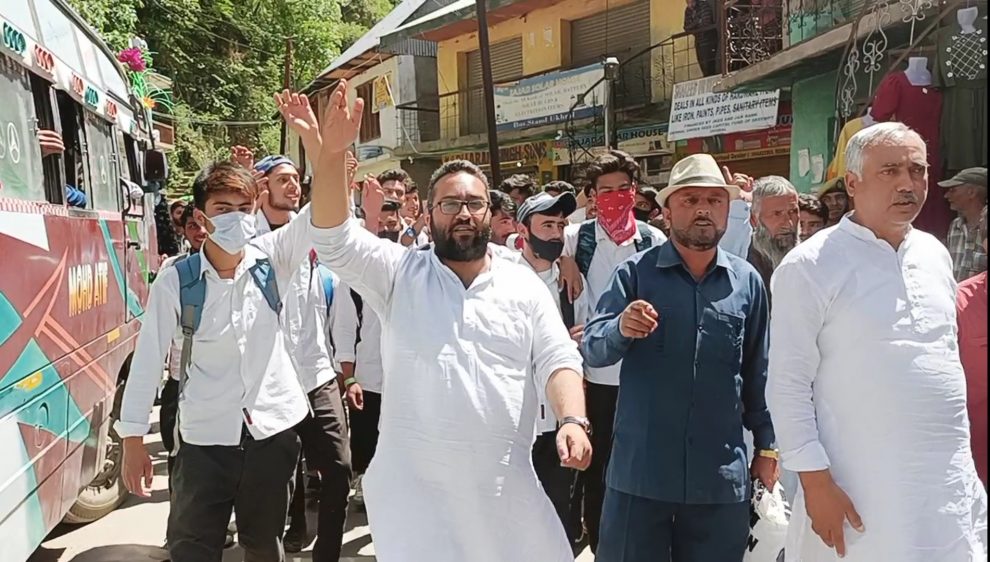 The Dispatch Staff
Add Comment
Congress, Youth Congress continues its protest in support of students and their demands in Ukhral district Ramban

JAMMU: Congress, Youth Congress continues its protest in support of students and their demands in Ukhral district Ramban. The protest was led by Working State President Pradesh Youth Congress J&K Fairoz Khan, Ex MLA and district president Congress, Ramban, Ashok Dogra, block president Ukhral Ishaq Khanday. The Protesters which were raising slogans in favour of their demands, were joined by a large number of aggrieved students and people of Ukhral. The protest started from Tehsil morh Ukhral and passed through streets of main market Ukhral and the protest ended at old bus stand Ukhral. The protesters had a minor scuffle with police but later the protest ended peacefully as protesters gave  7 days time for fulfillment of their demands.

Fairoz Khan Working State President Pradesh Youth Congress J&K said while addressing the protesters said that we are thankful to ARTO for raising our demand and writing to DC Ramban for SRTC buses but nothing happened pon ground , as  we need three buses, one for Pogal, one for Alinbass, Senabhati and one for Ramsoo, Makarkoot area. Special buses or matadors should be made available for girls. The female students are facing hardships of transport and they have to travel in jam packed buses and matadors and sometimes even waiting for hours and reaching home late at night. He demanded that school, college and the government authorities to facilitate the students with special buses. He also demanded that SRTC should start special buses in the morning & evening connecting various schools & colleges from the respective areas. He added that i have studied in college and universities and have been the 17th National president of National Students Union of India and travelled all over india students and raised students voice and students all over india pay half fares, while showing their student identity card  but i have seen a new trend in Ramban district and if students raise their voice it is been silenced by agents or threatened by police.

Khan said that Ramban district is facing an acute shortage of teaching staff as 586 posts of principals, lecturers, headmasters and teachers are vacant whereas the sanctioned strength is 2,073. This is now a big issue  why LG Govt is not announcing new posts, so that vacant posts can be filled and some educated youth will get employed and also schools and colleges will get staff. The high schools and higher secondaries are facing the acute shortage of staff, he demands staff to be made available soon, so that students should not suffer more.

Ex MLA and district president Congress, Ramban, Ashok Dogra said in our governments this has never happened , we want justice to be done to students. He added that the wine shop opened yesterday is in the vicinity of Hospital (PHC Ukhral)  and near college and high secondary school ukhral  should be shut down or congress will be forced to take action , then administration will be responsible for law and order problems.

Congress Block president Ukhral Ishaq Khanday said we are giving one week time to the administration to fulfill our demands  or we will continue our fight till our demands are met.

The demands were handed through officials of administration  to SDM Ramsoo on the letter pad of BDC Chairman Karleep singh Bali who gave verbal assurance for  early redissral of their demands.