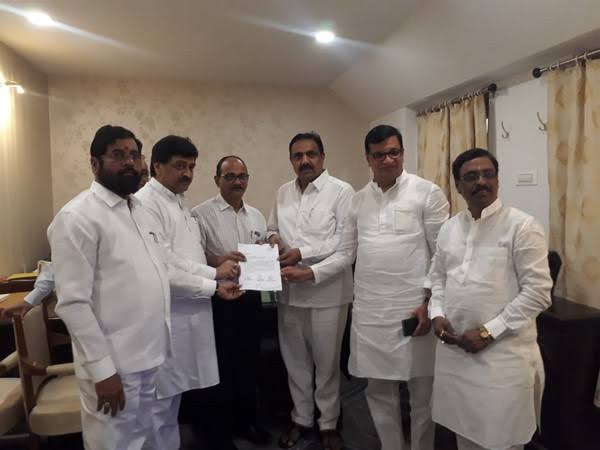 Leaders of Congress, NCP and Shiv Sena arrived at the Raj Bhavan here on Monday amid the ongoing political tussle in the state.
The leaders of the three parties submitted to the officials at Raj Bhavan letter of MLAs supporting their alliance. Following this, state Congress spokesperson Sachin Sawant tweeted, “The @INCMaharashtra, @ShivSena and @NCPspeaks delegation with their respective leaders have called on Governor at Rajbhavan to register its claim to form the govt in future as the incumbent govt is definitely going to fall. State must not get President’s Rule again.”
The development comes even as the Supreme Court is hearing a plea jointly filed by the NCP-Congress and Shiv Sena against the formation of BJP-led government in Maharashtra.
Earlier today, Shiv Sena leader Sanjay Raut told reporters at a presser here that members of his party, NCP and Congress will meet Governor Bhagat Singh Koshyari.
After prolonged uncertainty over government formation that lasted nearly a month, Devendra Fadnavis on Saturday morning took oath for the second time as the state’s chief minister, while NCP’s Ajit Pawar was sworn-in as his deputy in a surprising development.
Following this, NCP has removed Ajit Pawar as the leader of its legislative party, with party chief Sharad Pawar saying that the decision of his nephew to align with the BJP was against the party line. He warned that any MLA who aligns with him is likely to face the anti-defection law.
The BJP won 105 seats in the 288-member assembly in the last month’s assembly polls followed by Shiv Sena 56, NCP 54 and Congress 44. Although BJP and Shiv Sena got the mandate to form the government, the two parties sparred over power-sharing.