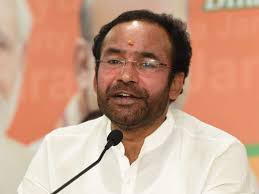 Minister of State for Home, G. Kishan Reddy has said that Congress has misused various laws during their regime and imprisoned many under the Maintenance of Internal Security Act and Terrorist and Disruptive Activities (Prevention) Act.

Replying to supplementaries in the Lok Sabha today, Mr. Reddy said, Congress has no right to speak about democracy. He said, so many political leaders like Jai Prakash Narayan, Atal Bihari Vajpayee, LK Advani and others were jailed during the Congress regime.

Congress MP Anumula Revanth Reddy and Manish Tewari raised the issue of low conviction rate under sedition cases. In response, the Minister said that the NDA government has started the practice to maintain separate data for sedition, whereas Congress did not maintain separate data for sedition cases. He said, National Crime Records Bureau started collecting data on cases registered under the offence of Sedition only from 2014 onwards. Mr. Reddy informed that around 93 cases have been registered under sedition laws during 2019. He said, public order and police are state subjects and maintaining crime related data is the responsibility of the respective State governments.