Home Newsfeed Congress does what Pak has been doing for long: PM Modi on... 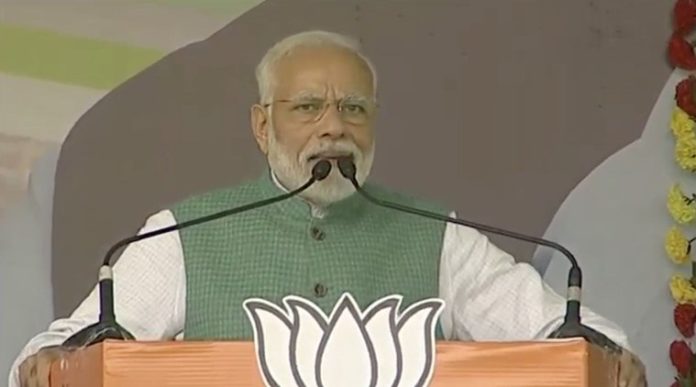 Prime Minister Narendra Modi on Sunday attacked the Congress party for holding protests outside Indian embassies across the world, comparing these acts with that of Pakistan.
“For the first time, the Congress party has done what Pakistan has been doing for long. What can be more shameful than that? Will any Indian stage a demonstration outside any Indian embassy in other countries,” asked Modi, while addressing an election rally here. As a part of its Bharat Bachao Rally, the Congress party staged protests outside Indian embassies across the world to highlight the problem of unemployment, slump in the economy, and distressed farmers in the country on Saturday.
Speaking about the newly-enacted citizenship law, the Prime Minister said that the Citizenship (Amendment) Act has been brought in to give respect to non-Muslims, who fled religious persecution in Pakistan, Afghanistan and Bangladesh and arrived in India before December 31, 2014.
“To give respect to those who fled to India and were forced to live as refugees, both the Houses of Parliament passed the law,” he told the gathering.
He accused the Congress and its allies of creating a ruckus over the citizenship law and indulging in violence.
“The Congress party and its allies are creating a ruckus. They are indulging in arson because they did not get their way. Those who are creating violence can be identified by their clothes,” he said.
Prime Minister Modi said that the Jharkhand Mukti Morcha (JMM) and the Congress do not have any roadmap and intention for the development of the state and accused them of opposing the country.
“They only want to oppose the BJP and abuse Modi. While opposing the BJP, these people have started opposing the country,” said Modi.