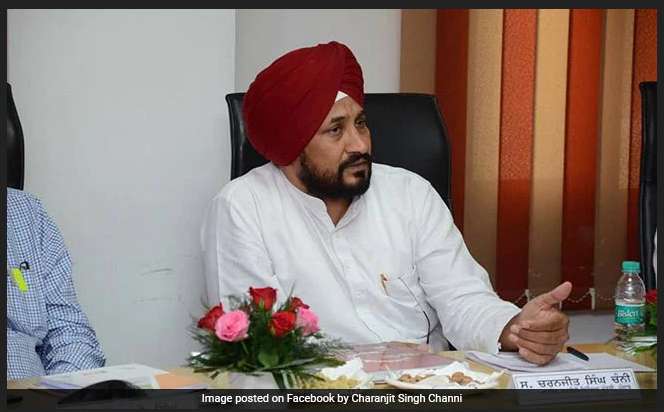 Chandigarh: The Congress on Sunday picked Charanjit Singh Channi as the next chief minister of Punjab, making him the first Dailt to hold the post in the state, a day after Amarinder Singh resigned following a bitter power tussle in the party.

Channi, who met Governor Banwarilal Purohit to stake his claim to the top job in the poll-bound state soon after being elected as the leader of the Congress Legislature Party, will be sworn in on Monday morning.

The party settled on the technical education minister in the outgoing Amarinder Singh cabinet after a flurry of consultations through the day, following the abrupt cancellation of an 11 am meeting of the CLP.

Several names did the rounds over the next several hours and minister Sukhjinder Singh Randhawa appeared to be the clear frontrunner for a while. Congress veteran Ambika Soni told reporters in Delhi that she was offered the post but declined.

On Saturday, the new Punjab Congress chief Navjot Singh Sidhu and his predecessor Sunil Jakhar were supposed to be in the running.

The Congress decision was announced on Twitter a little before 6 pm, and came as a surprise to most.

It gives me immense pleasure to announce that Sh. #CharanjitSinghChanni has been unanimously elected as the Leader of the Congress Legislature Party of Punjab,” AICC general secretary Harish Rawat said. A day earlier, a CLP meeting had authorised Congress president Sonia Gandhi to take the decision.

Channi, 58, becomes chief minister with less than six month to go before the assembly polls in Punjab.

Amarinder Singh was nudged into quitting ostensibly over his failure to fulfil the promises made by the party in the 2017 assembly polls. It is not clear if the new CM will be able to accomplish the task in the time available to him, observers say.

But his appointment will allow the party to play the Dalit card in the coming elections. An estimated 30 per cent of the state’s population, counting both Sikhs and Hindus, is from that community.

The opposition BJP had earlier announced that if voted to power in Punjab, it will make a Dalit the chief minister, while the Shiromani Akali Dal — which is fighting the polls in alliance with the BSP — had said that its deputy CM would be from that community.

Sidhu and the party’s central observers Ajay Maken and Harish Chaudhary accompanied Channi when he visited the Raj Bhavan to stake his claim to form the government.

Amarinder Singh congratulated him. “My best wishes to Charanjit Singh Channi. I hope he’s able to keep the border state of Punjab safe and protect our people from the growing security threat from across the border,” he said.

Sukhjinder Singh Randhawa, the earlier “frontrunner” for the post, said, “I welcome the decision of the party high command.

Channi is considered close to cricketer-turned-politician Sidhu. Along with three other ministers Randhawa, Tript Rajinder Singh Bajwa and Sukhbinder Singh Sarkaria — he has been part of the Sidhu camp in the party’s divided house in Punjab.

The sniping between Amarinder Singh and Sidhu continued even after the younger leader’s elevation. For the CM, the summoning of the legislative party meeting on Saturday was the last straw.

Hours before the CLP meeting, the ‘Captain’ got in touch with party president Sonia Gandhi, apparently telling her that he has been humiliated and will resign as CM.

In a letter to her, Singh mentioned his personal anguish over political developments in the past five months and apprehended that the high command’s move might cause instability in the state.

After submitting his resignation on Saturday evening he continues as the caretaker CM till Channi is sworn in Amarinder Singh also threw broad hints to the media that he is now free to consider his options.

Apparently picking on this, Rajasthan Chief Minister Ashok Gehlot, who faces his own problems with dissident Sachin Pilot, advised restraint. “I hope that Captain Amarinder Singh will not take any such step which will harm the Congress party, he tweeted.

The leadership switch in Punjab and the not too smooth manner in which it was executed could have a bearing on Rajasthan and Chhattisgarh, the only two other states where the party is in power on its own.

“The Punjab developments are likely to have ramifications elsewhere. Dissensions within the party may get fuelled and this will weaken the party further,” said a senior leader.

Another leader said the decisions taken in Punjab are a “self-inflicted injury” and will come at a cost.

Party sources said the G-23, the grouping of leaders who had written to Sonia Gandhi last year seeking an organisational overhaul, is also waiting in the wings to see the outcome of changes initiated in Punjab.

Former Union minister Ashwani Kumar hoped Amarinder Singh would be assuaged soon. The resignation of Capt Amarinder Singh was an unpleasant and difficult situation. Its ramifications are yet to unfold, he told PTI.

BJP IT department chief Amit Malviya on Sunday raked up a controversy which goes back to 2018, when an IAS officer alleged that Channi sent her an inappropriate text.

The party also seized on the outgoing CM’s charge that Sidhu is anti-national .

Senior BJP leader Prakash Javadekar termed Singh’s charges “extremely serious” and asked why the Congress president and its two other main leaders Rahul Gandhi and Priyanka Gandhi Vadra are silent on this.

Every rupee in my foundation awaiting its turn to save a life: Sonu Sood
RSS chief junks allegation of Swayam Sevaks interfering with administration
Comment