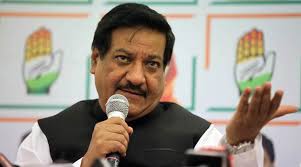 To put an end to the political stalemate in Maharashtra, both Congress and NCP leaders are going to hold a meeting at 10 am on Thursday, following which there will be a joint meeting of the two parties in the afternoon, said Congress leader Prithviraj Chavan.
The Congress-NCP leaders are also scheduled to hold meetings with the Shiv Sena leadership on Friday in Mumbai, after which the announcements related to government formation might be made. “We have finished our discussions at the meeting today. We resolved many issues and Shiv Sena leadership was in touch with us through the phone. We will continue tomorrow when Congress and NCP will sit separately tomorrow and then will hold a joint meeting in the afternoon following which we will proceed to Mumbai in the evening. Day after tomorrow Shiv Sena, Congress and NCP will sit together by the end of which there will be the announcement.
Earlier yesterday, Congress leaders including Ahmed Patel, Jairam Ramesh and Mallikarjun Kharge on Wednesday evening briefed party interim president Sonia Gandhi about their meeting with the Nationalist Congress Party (NCP) chief Sharad Pawar.
After briefing Gandhi, the three Congress leaders again returned to NCP chief Sharad Pawar’s residence.
Sources added that during the course of Wednesday’s meeting, the Congress and NCP leaders also held talks with Shiv Sena leadership over the phone and got a positive response.
The sources also added that as part of the coalition government, a sharing formula of 2.5 years each between the Shiv Sena and NCP for the chief minister seat has been approved while Congress will be given the deputy CM seat.
The Speaker post is likely to be given to an MLA from either the Shiv Sena or the NCP.
Maharashtra came under President’s Rule after all the parties failed to form a government in the state. The BJP, which emerged as the single largest party, could not stake claim to form a government as its ally Shiv Sena remained firm on rotating the Chief Minister’s post and equal sharing of Cabinet berths.
Shiv Sena parted its ways with BJP only to explore ways to form a government. It, however, failed to prove the support of the required number of MLAs in the time given by Governor BS Koshyari.
The Governor had then invited NCP, the third-largest party, to prove its ability to form the government failing which President’s Rule was imposed in the state.
The Shiv Sena is now holding talks with the Congress and NCP to form a government in the state.
The BJP won 105 seats in the 288-member assembly followed by Shiv Sena 56, NCP 54 and Congress 44.