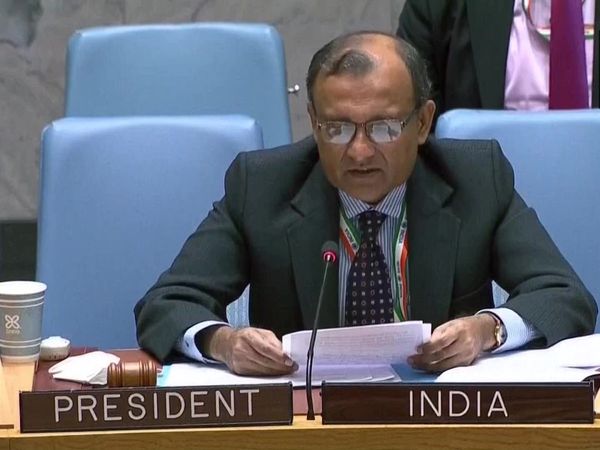 India on Monday said that Afghan men, women, and children are living under a constant state of fear and if there is zero-tolerance for terrorism in all its forms and manifestations and it’s ensured that Afghan territory isn’t used by terrorist groups to threaten or attack any other country, then Afghanistan’s neighbours and region would feel safer.

India’s Permanent Representative to the United Nations TS Tirumurti made the statement while addressing an emergency meeting of the UN Security Council being held under India’s current presidency on Afghanistan following Taliban’s spree of violence.

“As a neighbour of Afghanistan, as a friend of its people, the current situation prevailing in the country is of great concern to us in India. Afghan men, women, and children are living under a constant state of fear,” said India’s Ambassador to UN, TS Tirumurti.

This was the second meeting on Afghanistan under India’s presidency at the council. Estonia and Norway had requested this urgent session after the Taliban took over the capital city Kabul on Sunday.

Before the current crisis unfolded, India had ongoing development projects in every one of 34 provinces of Afghanistan.

“We call upon parties concerned to maintain law and order, ensure safety and security of all concerned including UN diplomatic and consular personnel,” said Tirumurti.

India has contributed significantly in recent years to the development of the country. Indian development projects have been undertaken in critical areas like water, road, healthcare, education, agriculture and capacity building. India’s emphasis has been on the welfare, and the well being of the people of Afghanistan.

Talking about the turmoil at Kabul airport where US troops were seen attempting to clear Afghans who flooded onto the airfield jostling, pushing and shoving to get on to planes in a bid to flee the country, Tirumurti said: “We have seen very unfortunate scenes at Hamid Karzai International Airport in Kabul that is widespread panic among the people. Women and children are in distress. Incidents of firing have been reported from the city including the airport.”

He urged members to have zero-tolerance for terrorism in all its forms and manifestations at UNSC special session.

“If there is zero-tolerance for terrorism in all its forms and manifestations and it’s ensured that Afghan territory isn’t used by terrorist groups to threaten or attack any other country, then Afghanistan’s neighbours and region would feel safer,” added India’s Ambassador to UN.

Afghans are worried about whether their right to live with dignity, would be respected. There are many unanswered questions after the collapse of the Afghan Government.

“We hope that the situation stabilizes soon, and the parties concerned, address the humanitarian and security issues. We also hope that there is an inclusive dispensation, which represents all sections of Afghan society. Voices of Afghan women aspirations of Afghan children, and the rights of minorities, must be respected, a broader representation would help the arrangement in more acceptability and legitimacy,” said Tirumurti.

“Afghanistan has already seen enough bloodshed in the past. It is time for the international community to come together unitedly rising above any partisan interests to support the people of Afghanistan in their desire for peace, stability and security in the country,” urged Titumurti.

Meanwhile, in response to media queries regarding the situation in Afghanistan earlier today, the official spokesperson of Ministry of External Affairs (MEA) Arindam Bagchi said, “There are also a number of Afghans who have been our partners in the promotion of our mutual developmental, educational and people to people endeavours. We will stand by them.”