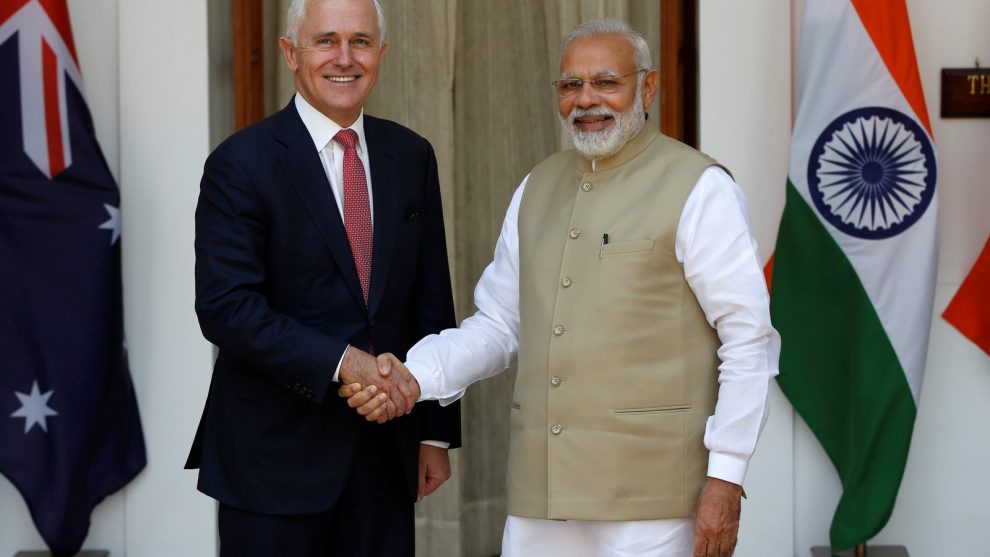 The Former Prime Minister of Australia Tony Abbot, visiting India last week as the special envoy to finalise a Free Trade Agreement has sounded a dramatic message to China and the world. If what he said happens, it would mean a radical change for Indian economy and its role in the world. The statements made by Abbot should not be treated as a diplomatic nicety, but a sign of serious geo-political shift in the region.

Abbot said that a FTA between Australia and India would signal the ‘democratic world’s tilt  towards India away from China’. Furthermore, he emphasised in as opinion piece in an Australian daily, “Answer to almost every question about China is India.” There cannot be a greater compliment and support to India. But will it materialise?

Why does Australia come so strongly in favour of India?  Australia was friendly with China. Abbot himself, when he was the Prime Minister, had signed a bilateral FTA with China in 2015. He had also spread the red carpet to Xi Jinping in 2014 when the latter was on a state visit to Australia. Negotiations between India and Australia for a Comprehensive Economic Cooperation Agreement began in 2011, and got suspended in 2015: the same time as Australia concluded the Agreement with China.

The reasons for Australia’s change of stance are not far to seek. The principal one is the realisation of the western world, including Australia, is that they were propping up a dictatorial regime in China. In order to perhaps take advantage of cheap labour, tighter controls, and big population. The west invested heavily in China. They ignored the interface between politics and economy. As the economy grew, Beijing unfolded its political culture of authoritarianism at home and expansionism abroad. Its coercive positions became manifest. Abbot, perhaps was speaking for all the rich western democracies, when he said, “The basic problem is that China’s daunting power is the consequence of the free world’s decision to invite a communist dictatorship into the global trading network”.

Abbot accused China of exploiting the goodwill of the west. He demurred that China was under- cutting their industries and stealing their technologies. And by doing so, it became a more powerful competitor than the former Soviet Union. Beijing was rapidly developing its military to match the only super power. In the process, Beijing has been threatening and intruding into territories of its neighbours, itching to take over a democracy like Taiwan and so on.

On the bilateral front, Canberra was peeved by Beijing’s boycott of Australian products–coal, barley, wine and seafood. China did it as it sensed Australia cosying up to the US and joining India and Japan to constitute Quad, an alliance aimed at checking Chinese hegemony in the region.

As a retaliation, Australia banned the Chinese telecom giant Huwai from communications infrastructure projects, outlawed Beijing covert interference in Australian internal politics. More annoying for Beijing perhaps was Australia demanding an independent investigation into the origins of the Covid-19 pandemic. In fact, Australia was the first country in the world to make that demand. The relations between Australia and China have been ruptured beyond immediate repair. Although nothing is written in stone in international politics, confirming the diplomatic adage that, there are no permanent friends or enemies in world politics. Normalisation of relations between Australia and China is quite unlikely.

Australia is turning to India to replace China as the manufacturing hub of the world, and counter the biggest communist dictatorship by the biggest democracy of the world. Abbott’s prognosis is that the rise of China as the other super power while becoming increasingly belligerent, it is in order that India occupies a bigger position as a counter-weight to China. He further postulates that trade deals are used as political weapons. So a swift deal between Australia and India would signal to the world that democracies would support India vis-à-vis China.

Abbott’s hypothesis on India being the substitute for China for the western world provides a great scope for India. New Delhi should grab it with both hands and build its capacity and context accordingly. Only last year, the bilateral relations have been upgraded with a slew of agreements signed between Prime Minister Narendra Modi and his Australian counterpart Scott Morrison. The agreements are aimed at deepening the defence ties and expanding the trade.

There are a few sticking points in concluding an agreement. They are normal in any negotiations. New Delhi is particularly concerned about free trade in Australian farm exports. Likewise, Australia is concerned about Indian workers seeking less restrictive visas to their country. These reservations should be ironed out with mutual understanding and concessions. The Australian High Commission in India was hopeful that Abbot’s visit would “propel economic relationship to its full potential, to the mutual benefit of the Indian and Australian people”.

Now to deal with question whether this would materialise at all; whether India will be the answer to everything in China? It will depend upon how New Delhi reacts to such goodwill and the strategic shift shown by the west. New Delhi had misread the Chinese mind 70 years ago, as the west did recently. It is high time that the democracies of the world take on board the threat posed by China. New Delhi can no longer think of engaging and accommodating Beijing. It has to counter China in all areas of diplomacy, economy and defence.

In order to be able to checkmate China, New Delhi will have to do the following: First, it has to strengthen democracy, because there is a visible downslide in India. The institutions including Parliament are being compromised. The legal (majoritarianism) is confused as democratic. This distinction has to be recognised. Second, New Delhi has to put the economy back on track. Admittedly, covid pandemic disrupted the economies across the world, but Indian economy was in a downturn even before the pandemic. The political climate and trade regime have to be made conducive for trade creation and a clear diversion from China.

Third, New Delhi has to give up its balancing and non-aligned posturing in favour of joining the democracies of the world.  Fourth, if New Delhi aspires to match Beijing, it has to look and become different from China. The fear is that the current regime in Delhi is quietly echoing Chines systems. New Delhi will have to stick to its civilisational values of liberty, equity, pluralism, solidarity in its foreign policy.

Australia’s offer is a historic opportunity. New Delhi should not miss as Nehru did with the American offer to become a permanent membership of the UNSC. Let us learn from the past and not repeat the monumental mistake. —INFA

Round The States
North-East Region: Past & Present Clash
Comment