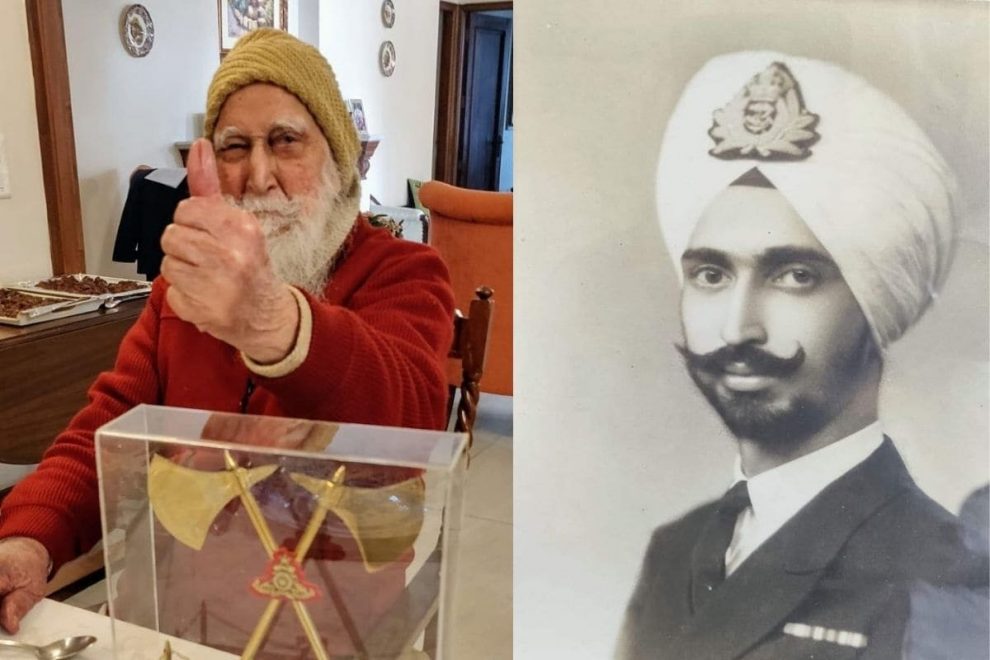 Chandigarh: Colonel Prithipal Singh Gill (retired), a World War 2 veteran who holds the unique distinction of having served in all three defence services, turned 100 with wishes pouring in from several quarters.

During his service with the Indian Army, Colonel Gill was posted with 34 Medium Regiment and later went on to raise and command the 71 Medium Regiment.
The 71 Medium Regiment sent an officer from Rajouri in Jammu and Kashmir to Gill’s residence here with a cake, a trophy, track-suit and a T-shirt to celebrate his birthday on Friday. He was also the commanding officer of the Regiment during the 1965 Indo-Pak war.
Gill has the distinction of serving in the Royal Indian Air Force, Royal Indian Navy and the Indian Army in a career spanning nearly three decades, his daughter-in-law Harpreet Kaur told PTI over phone on Saturday.
In view of the COVID-19 pandemic, his birthday celebrations here were limited to close family members and some friends, she said.
Gill’s son Ajay Pal Singh Gill is a doctor and grandson a lawyer. Colonel Gill’s wife Preminder Kaur is 93 years old and later this month the couple will be celebrating their 70th wedding anniversary.
Asked how Colonel Gill celebrated his birthday, Harpreet Kaur said, “He was very happy as early morning yesterday the Regiment (71 Medium) which he had raised sent an officer from Rajouri with a trophy, track suit and a T-shirt. He was thrilled. Posing for a picture with the trophy, he gave thumbs up and looked quite cheerful.”
“Many Army officers called to wish him on his 100th birthday. Cakes, flowers and other gifts were sent by the Army and even the bank where he holds his pension account fetched his photograph from the internet and got it printed and framed. A senior bank official came down to deliver it,” she said.
Punjab Chief Minister Amarinder Singh, himself a former Army officer, conveyed his good wishes, she said. “Sir, wish you many more years of good health and may you continue to always inspire all of us,” the chief minister later tweeted.
Colonel Gill graduated from Government College, Lahore and later took up flying lessons at Walton Aerodrome in Lahore where he earned a flying licence and later joined the Royal Indian Air Force (1942).
He was training at Karachi flying Howard aircraft, but his father Major Harpal Singh Gill withdrew him from there as family considered flying to be unsafe, she said.
Later, he joined the Navy where he served on a mine sweeping ship, INS Teer, an escort for cargo ships during the World War 2. He subsequently left the Navy after having completed a Gunnery Course.
“After his brief stint with Royal Indian Air Force, he joined the Navy where he developed water in his lungs during the naval service. Because he was on the gunnery side of the ship, he was accepted in the Army. In today’s service, I doubt if you can do such a thing, he was lucky in that sense,” said Kaur.
After India’s Independence he joined the Indian Army, she said.
Before retiring in 1970, he also went on to command an Assam Rifles Sector in Manipur.
Throwing more light on Col Gill’s life, she said he has heard from his mother-in-law his love for hunting during his youth days. “He is very fond of children and always carries toffees in his pockets and gives it to them whenever he is out for a walk in the park,” she said.
Col Gill has followed a strict discipline in his life. “The family has a fixed meal time, breakfast will always be at 8:30 am, lunch at 1 pm and dinner at 8:30 pm, and I think that is the secret of their longevity. Besides, we have always had natural food, we have cows at our farm in Faridkot, all our food is cooked in desi ghee or mustard oil,” Kaur said.

Pfizer, Moderna, AstraZeneca: Which COVID-19 vaccine could reach developing countries first?
PM Modi reiterates, Government is committed to empowerment of each and every citizen of the country
Comment