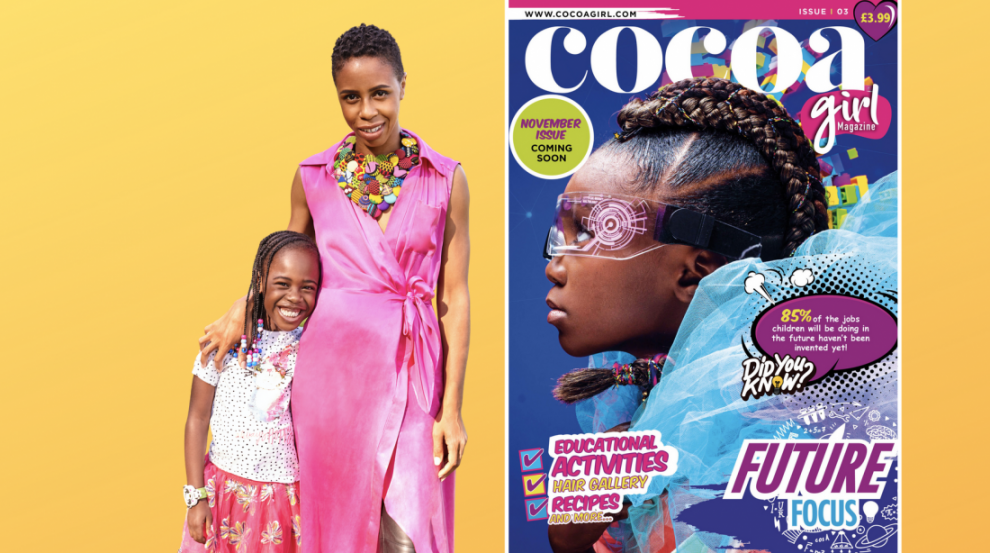 LONDON: All Serlina Boyd wanted when Britain first went into lockdown this spring was a magazine that kept her six-year-old daughter Faith entertained, away from digital screens, and above all, feeling good about her British-Jamaican heritage.

To her surprise, nothing fit the bill.

“It was really important for me that whatever I was putting in front of my daughter had some sort of representation because she wasn’t liking what she looked like, her hair. She experienced some bullying in school,” Boyd said.

“So when I went to buy some magazines to entertain her during lockdown, I was shocked to find that there wasn’t anything. We just decided to do it ourselves.”

Now she runs a publishing company and has a book deal.

The kernel for the new Black business came when Boyd was forced to jettison plans to open a nursery after the first country-wide lockdown shut all childcare facilities and schools.

That left both mother and daughter with time on their hands so they used the unexpected lockdown to knock heads and create Cocoa Girl, Britain’s first magazine for Black girls.

Things have since taken off.

“It was just a small, little project that I could do on the side whilst waiting for the nursery to go through after the lockdown,” said Boyd, who has a background in publishing.

“But now, obviously, I’m not doing childcare. I’m a full-time publisher. So that little project has turned into a proper job,” she said.

Money reserved for the nursery was used to fund their publishing venture, with Boyd in charge of design, Faith – who is now seven – acting as head of content, and a sub editor making up the core team.

In 2019, about 37% of magazine covers featured a a non-white person, according to U.S. fashion website The Fashion Spot, which analysed nearly 750 covers across 51 titles worldwide.

When it comes to children’s books, nearly 27% of titles published in 2019 in the United States featured a person of colour as the main character, said the Cooperative Children’s Book Center.

In Britain, seeing a non-white lead in a children’s book is more rare, despite 13% of the country’s population having a minority ethnic background, according to the 2011 census.

Just 5% of children’s books had a lead character who was Black, Asian or an ethnic minority (BAME) in 2019, research by the Britain’s Centre for Literacy in Primary Education and children’s reading charity BookTrust showed.

The report said only 8% of children’s books had BAME authors and illustrators over the past three years.

Boyd did not expressly set out to fill this Black hole in print media but she quickly found herself doing just that.

Cocoa Girl launched in July, in the midst of a lockdown and after the death of George Floyd in the United States, which sparked global conversations around race and inequality.

Parents and children were hungry for representation in the media, as reflected in the thousands of shares and likes on her social media accounts, Boyd said.

“I made a website that took about 10 minutes and posted the cover. Then I started to hear lots of pings on my phone – that was the magazine selling one a second. It went really crazy,” said Boyd.

“A lot of people pre-ordered it before seeing it, they believed in it.”

Through word of mouth and social media, the mother and daughter duo sold nearly 16,000 copies of issue one.

In late October, nearly 5,000 copies of their November mag had already sold, with even a few schools now keen to stock it.

“Faith helps with choosing the content. So she has a notepad and she’s there, ‘Right mum, can we have this in the issue’. And she will approve the covers as well.”

In September, Cocoa Girl was joined by Cocoa Boy – the first British mag for Black boys – and went on sale in supermakets.

Boyd now wants to start a charity to help more people from BAME backgrounds get into publishing.

The pair has also secured a children’s book deal.

“The death of George Floyd made people – not just in my culture – but made everybody see that there hasn’t been a magazine like this before.”

“Why? Have we just been blindly going through life and just accepting things for what it is? When really there’s a group of children who have gone unrepresented for such a long time. You can’t be what you can’t see.”