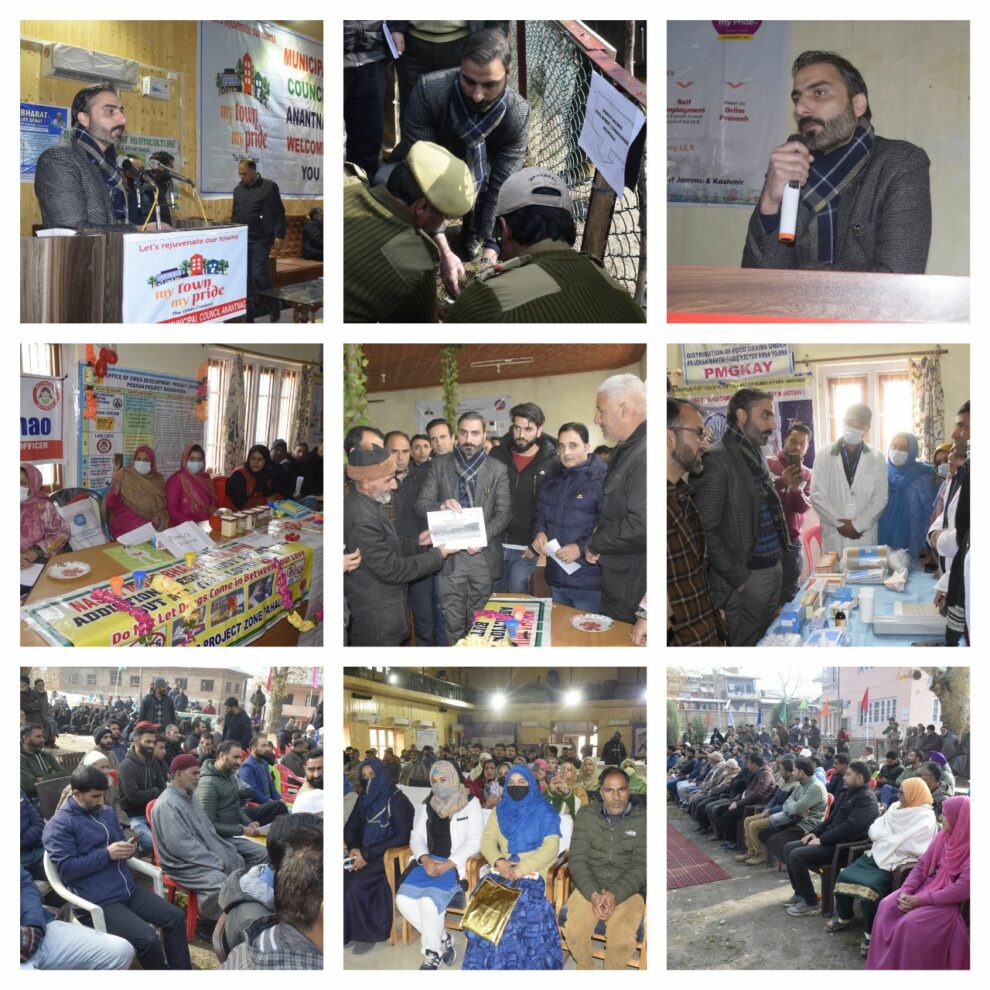 ANANTNAG: The Deputy Commissioner (DC) Anantnag, Dr Basharat Qayoom today conducted an extensive tour of MCs of Pahalgam, Aishmuqam, Seer, Mattan and Anantnag and reviewed various activities being undertaken under the flagship Shehri Jan Abhiyan being held as a prelude to the ‘My Town My Pride’ programme.

Speaking on the occasion, the DC said that the Shehri Jan Abhiyan has been organized to spread awareness among the people regarding various government initiatives in place for the welfare of the citizens and planned development of urban areas. He said that there is a parallel focus on ensuring green development with special emphasis on maintaining the ecological balance.

He said that the district, with 10 municipal committees and 1 municipal council, has a sizable urban belt and the program will cover a significant population. He said the aim of the program is to increase interaction between the public and government to ensure responsive and transparent governance.

Dr Basharat said that all departments have been directed to ensure vigorous participation in the program and have been assigned tangible targets. He said that the performance of each department is being evaluated and exhorted the District Officers to ensure that the assigned tasks are implemented on ground in letter and spirit.

He said that every effort is being made to ensure last mile delivery of public welfare measures and the district administration is committed to ensuring 100% coverage of eligible genuine beneficiaries.

The DC said that inputs of the public under the overall supervision of PRI members and in consultation with the departments will be the basis of formulation of resource mobilization plans. He said that ground level inputs will be instrumental for formulation of realistic and prioritized resource mobilization plans which will then be executed smoothly.

Laying special emphasis on Nasha Mukt Bharat Abhiyan, the DC said that the threat posed by drugs is real and has the potential of harming the social fabric. He said that the strategy for eliminating drug abuse leverages the critical role to be played by parents, teachers and peers in preventing youth from falling into this trap.

He also said that institutional mechanisms are in place and there is a district wide crackdown on supply of drugs and the culprits will be taken to task under stringent provisions.

The DC also distributed land passbooks among the beneficiaries and said that people should come forward and benefit from the live demonstrations being provided at CSC camps so that they can check records from the comfort of their homes. He also participated in the plantation drive at MC Aishmuqam.

Dr Basharat interacted with various officials and inspected the stalls setup by ICDS, Revenue, Health, AYUSH, Banks, Social Welfare, FCS&CA, Cooperatives, Agriculture and Horticulture, Handicrafts and Handlooms, NRLM, Youth Services and Sports and other departments. He impressed upon the officials to ensure that the public are briefed about the schemes in place and how they can leverage these for their welfare.

The DC was accompanied by Presidents of MCs, CEO PDA, SDM Pahalgam, Concerned EOs and other officials.