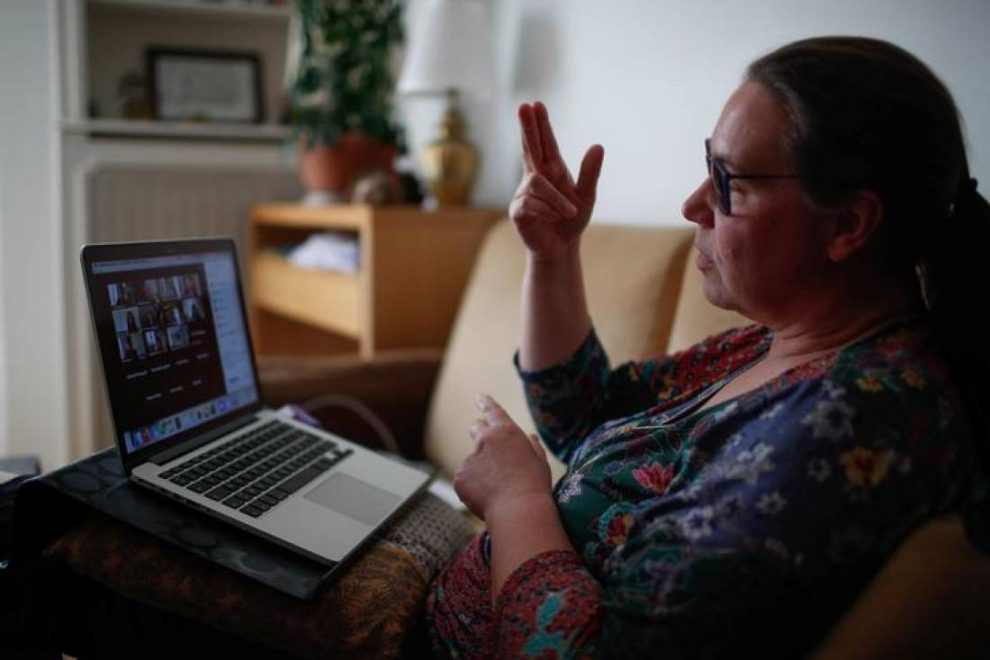 LONDON: When Canadian university student Aaron Ansuini wanted to email his professor about a point he made during an online lecture, a search for the teacher’s email address instead turned up a memorial page marking his death two years earlier.

Despite his demise, Francois-Marc Gagnon is still lecturing for an online course on Canadian art history at Concordia University in Montreal via pre-recorded videos.

“It was very strange, I thought maybe it was a mistake at first. My knee-jerk reaction was to go back and check all the course contents because I thought I had missed something,” Ansuini told the Thomson Reuters Foundation over the phone.

A Twitter post about his experience drew shock from many users – and replies from academics who feared creating digital recordings of classes could result in them losing control over their work, or videos being used to replace paid staff.

Vannina Maestracci, a spokeswoman for Concordia University, declined to confirm who owned the copyright for Gagnon’s videos, created for the university’s online-only eConcordia catalogue.

But she noted the course also had an instructor and teaching assistants to liaise with students.

“We regret that the student felt they had not been clearly informed and have updated Dr. Gagnon’s biography in the course information provided to registered students,” she said in emailed comments.

Unions and legal experts say the discussion highlights issues around ownership rights over digital content, as COVID-19 pushes people to increasingly use video conferencing and other online tools that allow their work to be recorded and potentially re-accessed for years to come.

“A lot of our members are being asked to record their lectures … and I think there has been quite a bit of concern about how that is going to be used,” said Jenny Lennox, who deals with negotiations at Britain’s University and College Union (UCU).

“The issue isn’t about not wanting to do the lecture … It is about limiting how that is then used so their intellectual property isn’t ad infinitum distributed.”

The debate comes as the pandemic drives a shift to remote working which has led to a spike in the use of video conferencing software such as Zoom and Microsoft Teams.

Leading video platform Panopto, which is widely used in the education sector, said the pandemic has led to a “dramatic rise” in use of the technology.

In a December press release, the company said class recordings had increased by more than 500% year-on-year over the autumn semester.

Teachers’ unions have warned that classes should not be recorded without consent and teachers must retain control over their material, including the right to withdraw videos from reuse.

However, some academics responding to Ansuini’s posts said lecturers are facing increased pressure to record classes under the switch to a video-based system.

“McGill is pretty clear that our materials are copyrighted to us individually but … we actually haven’t had a discussion about all these videos that are being uploaded to their servers. Future is hard to predict,” she added.

In the United States – as in Canada – the main legal question around such recorded content is over who owns the copyright, she said.

In most cases, work created in the course of paid employment belongs to the employer, McSherry explained.

But academics have strongly pushed for the rights to their work on the basis that to hand it over would impinge on their academic freedom.

In practice, the situation will depend on the terms of the contract signed between the worker and the university, McSherry said.

“I do think the pandemic situation is bringing into sharper relief the tensions around ownership of lectures,” she said in a phone interview.

“If I were a professor in a university right now, I would be asking my employers to reaffirm that the work that I do is owned by me.”

In Britain, union officials are focusing on a number of rights and data rules, including the performance rights of lecturers to ensure they retain control over their videos, said Lennox at the UCU.

The debate could also spur efforts toward a “rebalancing of rights” between creators and publishers, said Graham Reynolds, associate law professor at the University of British Columbia who focuses on copyright and intellectual property.

“It gets us to think a little bit more about who owns the rights in works that we create and what are the limits of that ownership,” he said in a phone interview.

“We can ask … whether individuals should have more rights with respect to works that they do create.”

Meanwhile Ansuini, who is training to become an art teacher, said he “wouldn’t feel fantastic” about the prospect of recordings of classes he leads being used to run online courses after his death.

“If the university wanted to reference my work, that would be OK,” he said.

“But it wouldn’t be OK to have me deliver an entire class after I’ve died.”