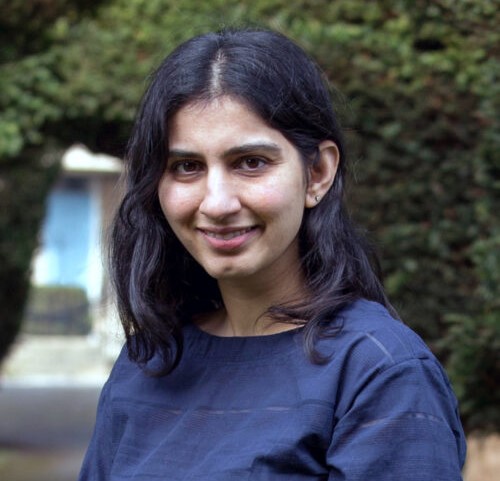 Maya would return. In an hour, in two, once she was ready, and then we—sister, best friend, confidante—would be forced to talk to each other.

I had thought of taking a short nap, but I worried that Maya would return and not want to disturb me. I hadn’t slept for over a day, but each time my eyes closed, I roused myself. It grew darker. The shadows from the trees outside the window pooled together, and still Maya wasn’t back. I caught myself on the verge of sleep once again and rose from the bed. I walked to the kitchen in search of food, and once I was downstairs, I began to inspect the room.

This too was just how I remembered, from the steel utensils that had been given to Ma on her marriage to the blue glazed dinner set Papa had bought. I picked up a plate and thought of the day of their arrival. Papa had just returned early from a work trip and had seen fit to purchase a new dinner set. The fact that the blue, a proud, unapologetic azure, didn’t match our furniture or our tablecloths, hadn’t occurred to him. In he had walked, weighed down by a cardboard box, calling out to all of us to gather in the living room for the grand unveiling. He had expected adulation, and when Ma didn’t speak, when she didn’t rush over to him with congratulations on his choice, he knew he had miscalculated. Slowly, the rest of the house adjusted to its presence. New tablecloths were bought. In a year or so, the dining chairs were reupholstered a deep red, and the blue plates began to feel like they had always been part of our home.

The one I held in my hands had a chip, and as I looked through the range, I saw signs of damage in several others. I set the plate carefully back alongside its siblings and left.

I haunted the house unhurriedly, wandering through rooms I had loved and forgotten. It was my own past I was exploring, and I got a strange sense of time standing still. There was the storeroom that was the depository for all the toys we had outgrown, and as I peeked in, I saw our old bikes stored carefully by the wall. Outside, near the kitchen, I spotted an old calendar. The writing had faded, and I had to strain to make out that it dated from 1995. The calendar hadn’t been taken off or replaced for over twenty years.

I heard a noise, a soft crack, a footstep on a dry leaf, perhaps, and I started. I immediately wandered back to the hallway to meet Maya, but I had been mistaken. No light came on in the porch, no key scraped against the lock, and no Maya appeared in front of me. I thought of our neighbours. There had been a family, the Kapoors, to our left with daughters roughly our age. We would meet after school, taking walks in the evening as the weather turned cool. I hadn’t met either of the girls for a decade or more, and now as I struggled to recall their names, I walked outside. Their house seemed different—larger, with several cars parked outside it—and though I wanted to walk towards them, to ring their bell and learn of how their lives had turned out, if there had been successes and marriages and children, I didn’t. Try as I might, I couldn’t recall the names of the girls. They had both had long hair they wore in braids down their backs, and both had a dimple on their left cheeks. Both were conventionally pretty, slim and neat and cheerful, but I couldn’t for the life of me remember what they were called.

‘They’re both married,’ I heard a voice say, and turned. There she stood, still and solemn and unyielding, my unsmiling older sister.

I smiled, smiled broadly to see her in spite of her lack of emotion, and she nodded. ‘I thought you would be in bed by now.’

I had been on the point of stepping forward to hug her but held back. ‘I wanted to wait for you.’

‘Good,’ she answered, nodding briskly. ‘Good.’ She walked to me, putting a hand gingerly on my shoulder. She looked at me as if to gauge my response. ‘It’s good to see you, Siya.’

We stuck to neutral topics—the weather, the change in global politics, and it was clear Maya wasn’t comfortable in my presence. She had been skittish when she had first arrived, standing on tiptoe, keeping a tight hold on her bag, and I halfexpected her to fly at any minute. Her hold on me had felt uncomfortable, and though she had led me in, towards the living room that led to each bedroom, she didn’t make an effort to converse.

The conversation trailed off, and I saw Maya look towards her room. ‘Maya,’ I said, and as she looked at me, I blurted out, ‘It’s so good to see you!’

She surprised me by smiling, and I thought how lovely she was. Her hair was still long and thick and left loose. When she was at college, she had grown it till it skimmed her waist. For a while, she had come back in the evenings—always at an acceptable time, always before dinner ended—with a flower in her hair. The flower changed with the day. Sometimes it was a yellow rose, and sometimes some pungent jasmine, and she took care to remove it before she entered the house, but I stationed myself by my bedroom window, and always caught sight of her looking furtively around before she dashed the flower from behind her ear. These adornments coincided with the time she was friends with a male law student, but the excitement ended almost as soon as it started; the evenings out, the flower in her hair, and the mention of a boy.

I thought of asking about him, but instead, she asked, ‘I hope it’s not too hot for you?’

‘It was snowing last week in London.’

‘I heard,’ she said, and then, ‘I sometimes check on the weather in London.’

She was thrown by the admission, for she swiftly added, ‘I have so many friends in London, you see.’

She was patting her hair, looking around the room as if upset by her admission, and I knew our time together was coming to an end. Her hands rested next to mine, and I turned to her. There were bags underneath her eyes, and I saw lines beginning to appear on her face. Maya had turned forty last year. She smiled, patting my hand, and I thought for the first time of my sister as a middle-aged woman. She looked tired, and there appeared to be a downward bent to her mouth I had never previously noticed. Her jaw hung slacker than I remembered, and I noticed a few strands of white hair near her ear, just by where the evening flowers would have rested. I was so instantly reminded of her in her college days that I asked, ‘Are you still in touch with that lawyer friend of yours?’

‘Who?’ she asked. She had been on the point of sitting down, but now she straightened herself out. ‘Are you in any trouble?’

She was looking disbelievingly at me. ‘Is that why you had to come here in such a rush?’

‘No,’ I said. ‘I hope you don’t mind, but I would see you come in some evenings with flowers in your hair.’

There was no reply.

‘Please don’t be angry,’ I rushed to add. ‘I was too young to think about privacy, and I thought you looked so beautiful.’

She waved a hand in the air. ‘It was nothing.’

‘Didi,’ I said, using the word for older sister I had abandoned years ago. ‘What was his name?’

She knew immediately who I referred to. ‘Kunal,’ she said. ‘We were at college together.’

‘Was he your boyfriend?’

She paused. ‘No,’ she said. She played with her hands, lacing her fingers through one another, and I knew she was thinking of the past. Her emotions flitted across her face— there was a smile, followed by a frown, then a slow pat of her cheek—and I knew she was considering her response. How beautiful she still was, despite the slackness of her face, and despite the lines the years had etched on her features. These would ordinarily have been mitigated with creams, with advice from someone close going through the same changes, but there didn’t appear to have been anyone around for her to turn to. She was expressive, majestic and solitary, and she reminded me of a heroine of a Greek tragedy. I shook my head to free myself of my morose bent of mind.

Maya looked up at me. ‘No,’ she replied resolutely, ‘He was never my boyfriend.’

The Dispatch is present across a number of social media platforms. Subscribe to our YouTube channel for exciting videos; join us on Facebook, Intagram and Twitter for quick updates and discussions. We are also available on the Telegram. Follow us on Pinterest for thousands of pictures and graphics. We care to respond to text messages on WhatsApp at 8082480136 [No calls accepted]. To contribute an article or pitch a story idea, write to us at [email protected] |Click to know more about The Dispatch, our standards and policies
TagsCivil Lines Contemporary Fiction Radhika Swarup Simon & Schuster India