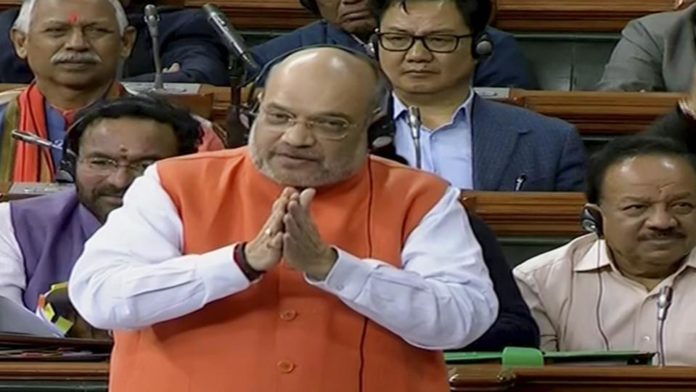 New Delhi, Dec 9: The Citizenship (Amendment) Bill, 2019, neither violates provisions of the Constitution nor it is against the people of any religion, said Home Minister Amit Shah on Monday night. Replying to the debate on the Bill in the Lower House, the Home Minister said that the Bill has been brought to ensure that persecuted communities in Pakistan, Afghanistan and Bangladesh can live a dignified life in India. “This law has not been introduced for the people of any religion. This is for the protection of the oppressed minorities (in the three countries). Therefore, there is no violation of Article 14,” Shah said. Article 14 of the Constitution says the people are equal before the law and enjoys equal protection of the laws within the territory of India. “Many members cited Article 14 to say that the Bill is unconstitutional. I want to make it clear that this Bill is not unconstitutional in any way. Nor does it violate Article 14,” Shah added. Replying to DMK member Dayanidhi Maran’s question, Shah called the people of Pakistan occupied Kashmir (PoK) as “ours”. “Pakistan occupied Kashmir (PoK) is ours. The people there are also ours. Even today, we have reserved 24 seats for them in Jammu & Kashmir assembly,” he said. During the debate, Maran had asked whether there is any provision to grant citizenship to the people of PoK in India. Asserting the need to grant citizenship to the persecuted non-Muslims in the three countries, Shah said: “In 1991, the Hindu population was 84 per cent and in 2011, it was 79 per cent. In 1991, the Muslim population was 9.8 per cent and today it’s 14.23 per cent. We have done no discrimination on the basis of religion. In the future as well, there will be no discrimination based on religion.” In a reply to a question of AIMIM parliamentarian Asaduddin Owaisi, the Home Minister said that there would not be any need to introduce the Bill had the country was not divided into two on the religious lines — India and Pakistan. Owaisi, in his address, had said that the Bill poses a threat to the unity of India and tries to divide the country on the religious lines. During the Home Minister’s reply, opposition members kept interrupting him as he replied to MPs’ questions and allegations. Lok Sabha Speaker Om Birla was also seen asking members to maintain order in the House.