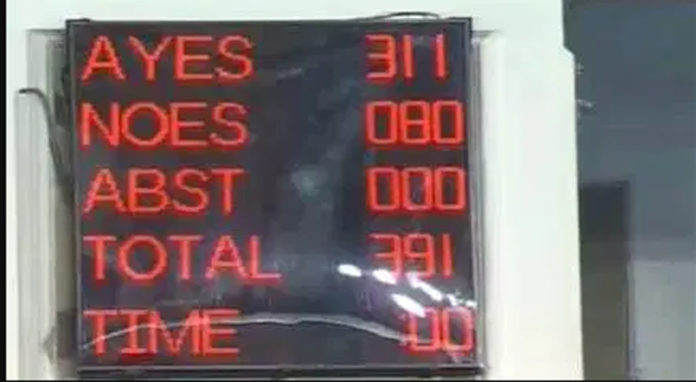 NEWDELHI: The Lok Sabha passed the Citizenship (Amendment) Bill, 2019 — which seeks to provide citizenship to illegal non-Muslims from Pakistan, Bangladesh, Afghanistan — late on Monday night, wrapping up a day-long fiery debate which also saw a member tearing up the bill in the House.

The bill now goes to the Rajya Sabha where the ruling party does not enjoy majority.

Fronting the criticism from the opposition over the bill being discriminatory, as it excludes Muslims from its purview, Home Minister Amit Shah categorically said in the Lower House that “there will be no discrimination based on religion”.

“Citizenship Bill is not violative of Article 14 of Constitution as it aims to give citizenship to persecuted people,” said the minister.

Impressing upon the need to introduce the bill, the minister said had India not been divided on religious lines, there would have been no need for such a bill.

Shah, who introduced the bill in the House, repeatedly emphasised that Muslims have nothing to do with this bill as they are not a minority in the three countries that are mentioned in the bill. The BJP leader also differentiated the difference between a refugee and an infiltrator and said the definition of the two should not be mixed-up.

On Congress leader Shashi Tharoor’s charge that the government has an agenda against a minority community, Shah said there is “no ill-will against Muslims”.

The minister also said there was no need to hypenate the Citizenship Bill with the National Register of Citizens.

“The National Register of Citizens (NRC) is not related to NRC and there should be no effort to connect the two. When we will bring NRC, we will do it with the same transparency and everyone will know about it. Be assured, NRC is coming soon,” said Shah.