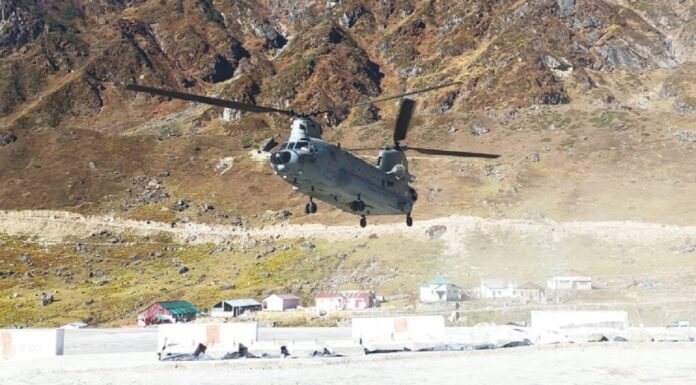 Chinook helicopter took off the debris of Indian Air Force’s MI-17 helicopter that caught fire following a collision with an iron girder while landing at the helipad near Kedarnath temple in 2018.The debris of the MI-19 helicopter will be carried to a nearby airbase. The preparations for lifting the debris has been going on for the last 15 days. Recently, Air Force officers visited Kedarnath Dham and took stock of the damaged helicopter.

Chinook helicopter landed at the MI-17 helipad in Kedarnath on Saturday to carry back the debris of Indian Air Force’s MI-17 helicopter.

In 2018, the Air Force’s MI-17 helicopter crashed while landing on the helipad located behind the Kedarnath temple. In the incident, the pilot suffered a minor injury, while the helicopter was damaged. IAF had left the damged MI-17 there.

On modernisation of the IAF, Air Chief Marshal RKS Bhadauria said the vision is to continue to comprehensively scale up the combat capability, and be a force to reckon with across the entire sphere of influence through careful force structuring and acquisition of indigenous equipment.

“The recent induction of state of the art Rafale, Chinook and Apache aircraft, have added significantly to our combat capability over our adversaries on the battlefield,” Bhadauria said.

“Our offensive strike capability has been honed further, with upgrades of our aircraft with weapons and sensors, ably supported by a networked decision making matrix,” he added.

The Chief of Air Staff also talked about the IAF’s full support towards the government’s self-reliance initiative, and said the force is rapidly shifting to indigenous equipment and platforms.

The Chief of Air Staff also mentioned the introduction of an electronic maintenance management system in the IAF for all its flying platforms and combat assets.”This is virtually the world’s largest such maintenance monitoring system, across various types of platforms and the numbers,” he added.

“The space domain is likely to become increasingly important in future years, and is being given the required thrust. I want all air warriors to understand the importance of the decade ahead, and work proactively towards making Indian Air Force the engine of growth of our indigenous aerospace industry,” he said.