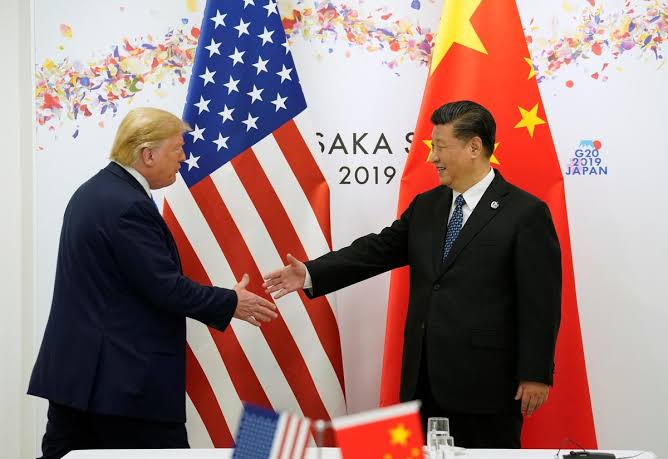 The incoming President Joe Biden has his task cut out for him when it comes to US-China relations. The US-China relations needs to break the mould of tit for tat reactions which have become a norm in 2020. There needs to be more mature and long term handling of the challenges. He will have to walk a fine balance between trying not to appear too easy on China while also trying to ease some of the existing pulls that strain this relationship.

China-US relations intersect at bilateral, multilateral and global levels. How these two countries interact which each other greatly affects the international political discourse and direction. They are two important drivers of international politics and economics. 2020 saw several areas over which Beijing and Washington showed animosity and proved that many flashpoints exist between them.

One major challenge has been the trade war which started in 2018. However, at the beginning of 2020, there were some positive signs. The signing of Phase One of the trade deal was a positive development. This deal relaxes some US tariffs on Chinese imports and commits China to buy $200 bn worth of American goods for the next two years, including agricultural products. China also pledged to remove barriers to a long list of US exports, like, pork, beef, poultry, seafood, biotechnology etc.[i] The outbreak of the COVID19 in January 2020 has changed global economic relations and equations. It has also raised questions on Chinese commitment to the deal.

2020 was also the election year for the United States. This, coupled with the outbreak of the COVID19, gave rise to propaganda warfare between Beijing and Washington. It has been discussed and argued that President Trump did rally anti-China propaganda and posturing to direct the focus away from the domestic outbreak of the COVID19 and its impact. Trump’s use of terms like Chinese Virus and Wuhan Virus to refer to COVID19 further antagonized the Chinese. He also claimed that the virus was developed in a Chinese laboratory.[ii] In retaliation, the Chinese side claimed that the virus reached China through the US military, without any proof. In March 2020 the WHO declared the outbreak a pandemic after it spread to more than 100 countries. The US has continued to blame the WHO for being soft towards Beijing and even halted the WHO’s funding.

The developments surrounding Hong Kong also further aggravated the relations between China and the US. The passing of the National Security Law by Beijing resulted in ending the preferential trade status between the city and the United States. The US also imposed a number of sanctions and restrictions on Hong Kong officials and businesses. Such actions by the US have been perceived to be interfering in the domestic issues by China. As a result, Beijing announced that it might also impose restrictions on US officials and businesses.[iv]
Another important development was the closing of the Chinese consulate in Houston. The US closed the consulate claiming that it was involved in economic espionage and intellectual property theft. As a retaliation, Beijing closed the US consulate in Chengdu.[v]

Taiwan has also been a major bone of contention between the two sides. The relations between Taiwan and China have constantly deteriorated since the election of Tsai Ing-wen as the President. Tsai has been pushing for a policy which reduces Taiwan’s dependence on Beijing. After her election for a second term, she has been vocal for an ‘independent’ economic and foreign policy of Taiwan. She is also seen as being closer to the United States. To make matters worse, during a radio interview on 12 November, the outgoing US Secretary of State Mike Pompeo asserted that “Taiwan has not been a part of China”,[vi] clearly aggravated Beijing.

2020 witnessed major competition between Beijing and Washington on the technology front. The US Commerce Department also closed Huawei’s access to critical semiconductor suppliers.[vii] This step has curtailed the path of Huawei’s 5G aspirations. To add to this, Trump has also banned several Chinese apps like WeChat and TikTok, citing security reasons. This is the first time that the United States has blocked foreign information technology.[viii]

These issues are just bilateral challenges. The US-China relations also face a number of global and multilateral challenges, like QUAD’s future, the developments in the South China Sea.
Beijing has been heavily critical and unwelcoming of the QUAD. China believes that it is an anti-China grouping on the lines of Asian NATO. The Chinese suspicions have only been aggravated by Washington’s push to build a ‘QUAD plus’, which will include countries like Vietnam, New Zealand, and South Korea. The US has also encouraged countries with maritime disputes with China to join this grouping. However, most of these countries have not been very keen about joining QUAD.[ix]

The US-China confrontation is also surfacing in the South China Sea. It is generally believed that the US has refrained from taking sides regarding the existing disputes. However, this appears to be changing. One major example is the Beijing criticism by the U.S. State Department. Washington has spoken in favour of Vietnam’s legal right to use resources in its EEZ. The US State Department’s released a statement in July that has rejected Beijing’s claims and supported the other countries regarding the South China Sea resources.[x]

The COVID19 pandemic has added to the negative perceptions of China and the Chinese people. There have been global calls for the boycotting of Chinese products, which has been a major challenge for Beijing. Taking a cue from the US several countries like India, the United Kingdom have banned Huawei and other Chinese apps and products. This can be an example for the future course for other nations who have ongoing conflicts with China.

The US has also reacted to China’s assimilationist tactics in Xinjiang and now increasingly in Tibet.  Mulan became the flashpoint during fall and underscored the rising anti-China sentiment in the US. The US also brought in laws forbidding various US companies from doing business with Xinjiang provincial administration and restricted market access for a few Xinjiang based companies. These developments should have happened in 2016, which was when China’s new ethnic policies began. Also this year, the US appointed Assistant Secretary Robert A. Destro as the country’s Coordinator for Tibetan Issues.[xi] This should strengthen the US interest in the region again, and even as it will be a while before one knows how it plays out in reality, it signals that such postures which had disappeared from the US-China discourse over the last decade-plus are back.

According to the October poll by the Pew Research Center survey, there has been a major decrease in China’s positive image in the United States. The survey indicates that US negative views of China jumped to 73 per cent, highest since Nixon’s visit to China in 1972.[xii]

However, one can only say that the issues related to Taiwan, Hong Kong, COVID 19 are only going to become increasingly challenging. Both sides have strong domestic nationalistic sentiments attached and involved. Any change or hint of softening may not be perceived positively by the domestic audience. The two countries perceive each other with mutual distrust.

Two major aspects need to be highlighted, one on Chinese domestic nationalism and second on China’s perceptions of the Biden presidency.

Nationalist Chinese writers have started saying that the Chinese system handled the pandemic better. It appears they did even if one does not trust their data and reflects on the superiority of the Chinese system. One saw that in some form of xenophobic expression of shunning the foreigners in Beijing and other cities after June. Then there were attacks on authors like Fang Fang who published her pandemic diary[xiii] sharing details covered up previously.

On Biden, China sees an opportunity; his announcement of re-joining the Paris Accord on Day 1 gives one hope to China. Biden’s focus would also be domestic, on jobs, infrastructure, and clean energy, so that should create some space for easing trade war for China and the attention diverted from the Chinese perspective. Even then, the pandemic and anti-China sentiment in the US will remain the guiding principles in the first year of the new US president.

China’s moderate domestic struggle on COVID19 (with all the applicable caveats) has strengthened the belief in that rejuvenation has nearly been achieved, and it seems as if we are going to have to deal with a really different kind of China now.