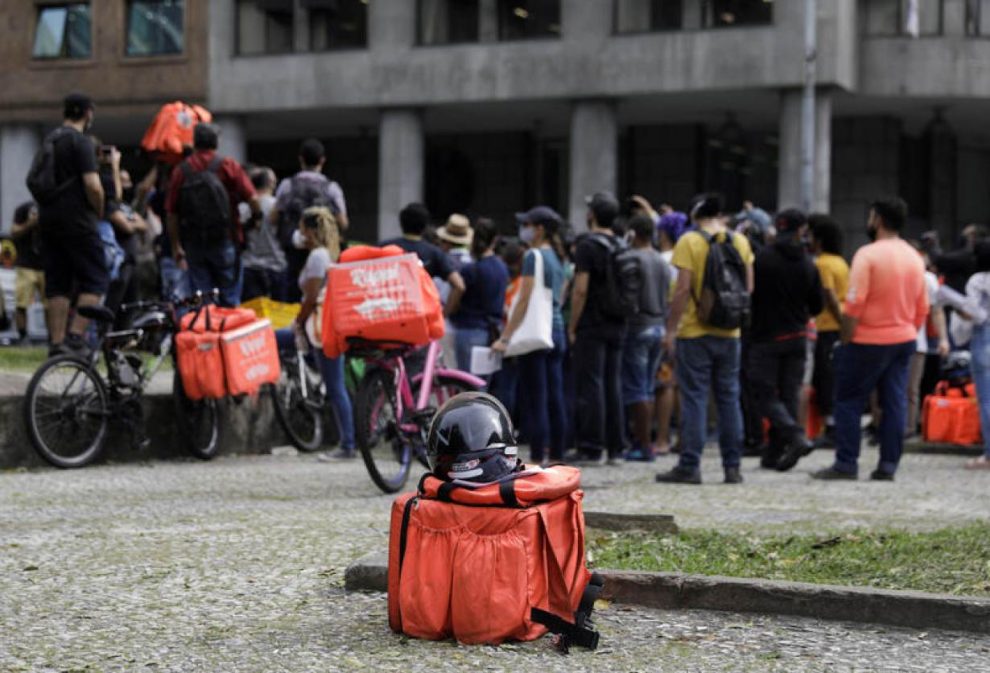 RIO DE JANEIRO: Cases of children working for food delivery apps in Brazil during the COVID-19 pandemic have been uncovered by the Thomson Reuters Foundation, with prosecutors vowing to investigate amid growing scrutiny of employment practices in the gig economy.

Videos and posts on YouTube and Facebook and interviews with underage workers and researchers showed how Rappi, iFood, 99Food and Uber Eats had failed to stop child labor, with under-18s using older relatives’ accounts or signing up under their names.

School closures and job losses caused by the pandemic have driven more children to work in the informal economy, according to activists. A United Nations survey in Sao Paulo of about 52,745 families found child labor rose by 26% from May to July.

A bicycle and a smartphone are all that are needed for children to tap into the growing demand for food deliveries, while social media sites are awash with advice on how to sign up and work while circumventing the delivery apps’ identity checks.

“(The companies) must be more vigilant in the selection of workers, so not to allow this outrageous (use of child labor).”

The Thomson Reuters Foundation spoke to two boys, aged 16 and 17, who said they had worked for iFood, Rappi and Uber Eats.

One of them, Eduardo, signed up to iFood and Rappi in July, months after his school closed due to COVID-19. The 16-year-old used the details and documents of his mother and older siblings.

On a good day, Eduardo said he could earn up to 50 reais ($9.40). But a minor bicycle accident in September shook his confidence and he wants to stop working when schools reopen.

“This (work) is not good for anyone,” he said in Praça Varnhagen, a public square in Rio de Janeiro surrounded by restaurants. “I just want something better than this.”

In response to the findings, the four named delivery apps voiced their opposition to child labor and outlined measures to identify fraudulent accounts. The companies said that children using other people’s details to sign up amounted to fraud.

Uber Eats, a unit of ride-hailing app Uber Technologies, said it had deleted several accounts, notified authorities and would work with them to probe potential fraud.

99Food, controlled by China’s Didi Chuxing Technology Co Ltd, said it was reviewing the documentation of its workforce.

iFood, controlled by Brazilian tech firm Movile, said all complaints about workers under 18 were investigated internally.

Bogota-based Rappi, which operates in nine Latin American countries, said it did not assume responsibility for false details or documents provided by gig workers on its platform.

iFood, Rappi and UberEats all said they combated fraud on their platforms by making gig workers take selfies during shifts and using facial recognition software to verify users. 99Food said it would launch a similar identification system this year.

Yet the safeguard is easy to exploit, gig workers said. When the request pops up, children can ask the account owner to take a photo for them. If someone gets banned from an app, they can sign up again using the details of another relative or friend.

Villa Real said the delivery apps were liable for underage workers and that a court could compel them to pay damages to the children, the state, and improve their anti-child labor efforts.

Three law professors, however, had varying views on the liability of the firms.

Leandro Antunes of Ibmec University shared Villa Real’s opinion, while his colleague Juliano Barra said the companies were in fact victims of fraud and that they should notify prosecutors of any cases of child labor on their platforms.

Olivia Pasqualeto of FGV University said it was a grey area as the children didn’t have a direct relationship with the apps.

This echoed a concern among labor activists globally that the growing gig economy – which is characterized by short-term contracts or freelance work – is exercising more control over workers while leaving them with no protection or legal recourse.

In Brazil, children under 18 are allowed to work in some circumstances but not permitted to do hazardous jobs. Officials said delivering food by bicycle would be considered dangerous.

President Jair Bolsonaro has said child labor is not harmful, reflecting a common belief among the public that it is better for children to work than be involved in drugs or crime.

About 2.4 million children work in Brazil – both legally and illegally – according to the latest government data from 2016.

Last year, the nation’s hotline for human rights violations received 4,245 calls related to children being abused or exploited while working – marking a 10% increase from 2018.

Yet data on children in the gig economy in Brazil is scarce, said several academics and researchers who study labor issues.

In 2019, Aliança Bike, a cyclists’ association, interviewed 270 delivery workers in Sao Paulo for a study on gig workers who use a bicycle to deliver food. Three were found to be underage.

“These kids are kind of adrift,” said Lucas Bravo, one of the organization’s researchers. “They have peak hours for orders, but between these hours they have nothing to do.”

In a separate study, Guilherme Minarelli, a social scientist at the University of Sao Paulo (USP), spent six months studying the gig economy in the state. He encountered several underage delivery app workers and interviewed two boys aged 16 and 17.

Many gig workers in the state who live in favelas must often cycle up to 50 km (30 miles) to reach food delivery hotspots, according to Minarelli. Some workers, among them children, sleep in parks after work to avoid cycling home and back, he added.

More than 1,000 gig workers protested in São Paulo in July to call for better pay and health measures, and said they risked being blocked by the apps if they refused to work longer hours.

Dozens of public and private Facebook groups related to gig workers contain posts where children talk about signing up to the apps using the identity documents of friends and relatives. Several public videos on YouTube offer guidance on how to do so.

“I’m here to help all of you who are minors and want to work for Uber Eats,” said a boy who claims to be 15 in a video posted on YouTube last year. It is no longer on YouTube but other videos showing the teenager delivering food are still online.

In these videos, he can be seen delivering for 99Food and Uber Eats. One of them has amassed at least 250,000 views. 99Food said it had found and banned the account he was using.

Another food delivery app worker turned YouTuber – a 29-year-old who posted a video advising minors on how to sign up – said he would allow his 15-year-old nephew to use his account.

“(My nephew) lives in one of the most dangerous favelas in Rio,” he said on condition of anonymity. “Doing deliveries would be a luxury, a lot less dangerous than staying in the slums.”

The Labor Prosecutor’s Office said it would speak to Google and Facebook about how best to track such posts and videos.

Facebook did not respond to a request for comment about various posts by children discussing working for the apps.

Alphabet Inc’s Google – which owns YouTube – said it would only remove videos that did not violate its user policy if the request came from Brazil’s judiciary, not the public.

Labor prosecutors in Brazil have investigated several food delivery apps this year over working conditions in general, yet only a handful of probes to-date have focused on child workers.

Ludmila Abilio, a researcher at the University of Campinas – or Unicamp – who has studied the gig economy for over a decade, said the delivery apps had an unprecedented wealth of data at their disposal to monitor their workforce and tackle the issue.

“I’m not sure if they are interested in creating programs to stop young people from entering this market,” Abilio said. “For now, it seems their only interest is that deliveries get made.”