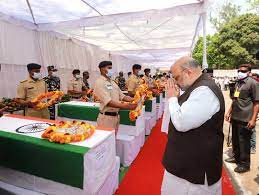 Union Home Minister Amit Shah along with Chief Minister Bhupesh Baghel paid respects to the martyred security personnel at police line of Jagdalpur, the divisional headquarters of Bastar in Chhattisgarh.

Earlier, the Union Home Minister reached Jagdalpur to take stock of the situation after Saturday’s Maoists attack. Maoists ambushed a joint team of security forces on Saturday in the forests of Bijapur district in Chhattisgarh, killing 23 security personnel.

Union Home Minister is having a high-level meeting in Jagdalpur along with Chief Minister of Chhattisgarh to review security situation in the state.

Later, he is likely to visit the CRPF camp at Basaguda, an area close to the site where the Maoist ambush took place in Bijapur district. Union Home Minister will have an interaction with CRPF and state police personnel at the camp.

During his visit to Chhattisgarh, Union Home minister will also visit Raipur to meet the injured Jawans undergoing treatment at hospitals in state capital. 13 injured jawans are admitted in various hospitals in Raipur.