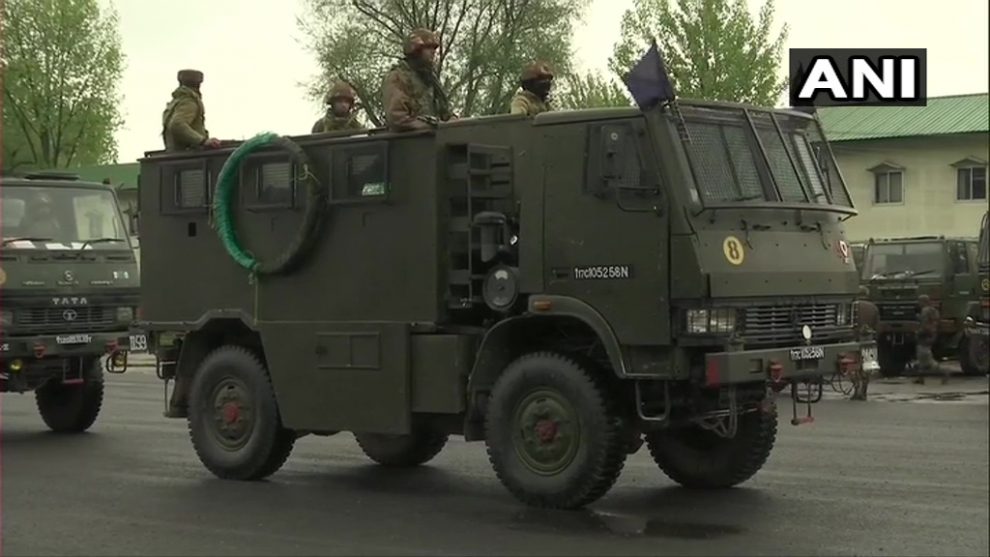 SRINAGAR, Apr 19: The army Monday said that the colours of flags on its vehicles, flags carried by soldiers, who are part of Road Opening Parties (RoPs), have been changed from red to blue and white, while as the new look to the road barriers at the security checks are the steps taken to address the “feeling of alienation among citizens.”

Recently, pictures of army vehicles displaying pictures of Kashmirs’ beauty displaying a message—“Kashmiri Ko Salam” went viral on social media while it was also learnt that the army has changed the flag colours to blue and white which otherwise used to be red. It was also learnt that soldiers who would carry lathis while on the move during convoy movement will use whistles only.

“Earlier, the army vehicles used to have red flags and even the soldiers in Road Opening Parties carried red flags while clearing the way for convoys. The road barriers in sensitive zones have also been given a new look,” the defence spokesman said.

He said that these steps have been taken to address the “feeling of alienation in the citizens at the security checks and drills.”

“There is a need for understanding the fact that the security checks are necessitated due to the existing threat of attacks by militants on the Security Forces and common man. “More the threat, more have to be the preventive checks and drills. These checks will be necessary till the time the militant threat can be brought down. This effort at countering militancy has to be a joint citizen-soldier effort,” Lt Col Musavi.

Lt Col Musavi said that these visual steps are a message that the Security Forces are reaching out to the citizens for better mutual understanding, and there is a desire to minimise the discomfort to the citizens due to the security drills. “The intent is to improve the citizen-soldier connect so that both work jointly to address the challenge of militancy in J&K,” he said.

The Dispatch is present across a number of social media platforms. Subscribe to our YouTube channel for exciting videos; join us on Facebook, Intagram and Twitter for quick updates and discussions. We are also available on the Telegram. Follow us on Pinterest for thousands of pictures and graphics. We care to respond to text messages on WhatsApp at 8082480136 [No calls accepted]. To contribute an article or pitch a story idea, write to us at [email protected] |Click to know more about The Dispatch, our standards and policies
Tags#thedispatch #Army