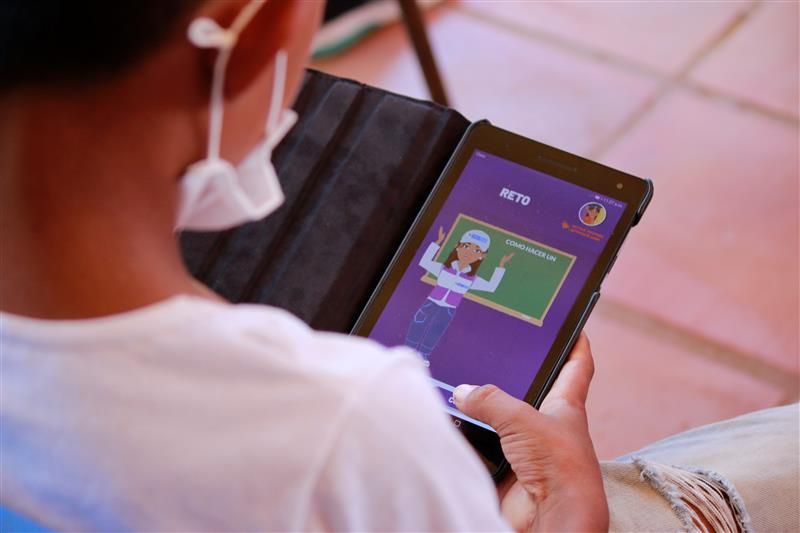 The children use a tablet with an app called O-Lab to study in Spanish and their native wayuunaiki language, which they can use without an internet connection. The tablets are funded by charity World Vision and Colombian bank Banco W.

“The lack of access to technology and the internet has become more evident during the pandemic,” said Tania Rosas, who developed the O-Lab app and co-founded El Origen Foundation.

Across Latin America and the Caribbean, the coronavirus outbreak has left about 150 million children out of school, some of whom have no way of going online to learn, according to UNICEF.

With many schools in Colombia still closed since March and classes going online, indigenous children are particularly at risk of falling behind in their education because they are less likely to have mobile phones, computers and internet access.

In La Guajira, an arid coal mining region, less than a quarter of children living in rural areas have access to the internet and a computer, according to El Origen Foundation.

Only a third of the province’s children finish secondary school, so ensuring students keep learning while schools are closed is crucial for their development and to lower the region’s high poverty and illiteracy rates, said Rosas.

“The gap in access to digital education is huge. Technology adapted to its context can be the solution to address this,” the 28-year-old told the Thomson Reuters Foundation in a phone interview.

Children can choose subjects on the app ranging from science and music to literature and maths, as well as information on COVID-19 prevention and how to surf the internet safely.

Half of the world remains unconnected, and only two out of 10 people in the least developed countries are online, according to the International Telecommunication Union, the U.N.’s internet and telecoms agency.

Having tablets meant children switching from blackboards and chalk to using any kind of technology to study for the first time, said Wayuu teacher Milixa Iguara, who trained children and other teachers to use the app.

“For a long time, people have spoken about La Guajira and the Wayuu as a vulnerable community, with big social problems like malnutrition … but it’s also rewarding to talk about a more educated indigenous community that can get ahead,” said Iguara.

Through the app, teachers can monitor student performance, share educational content, and keep in touch with text messages, she said.

In the coming weeks, Rosas hopes to roll out the app to Colombia’s Choco province, a rainforest area home to Afro-Colombian communities on the Pacific Coast, and to indigenous people in Mexico’s Puebla state, reaching about 10,000 students by next year.