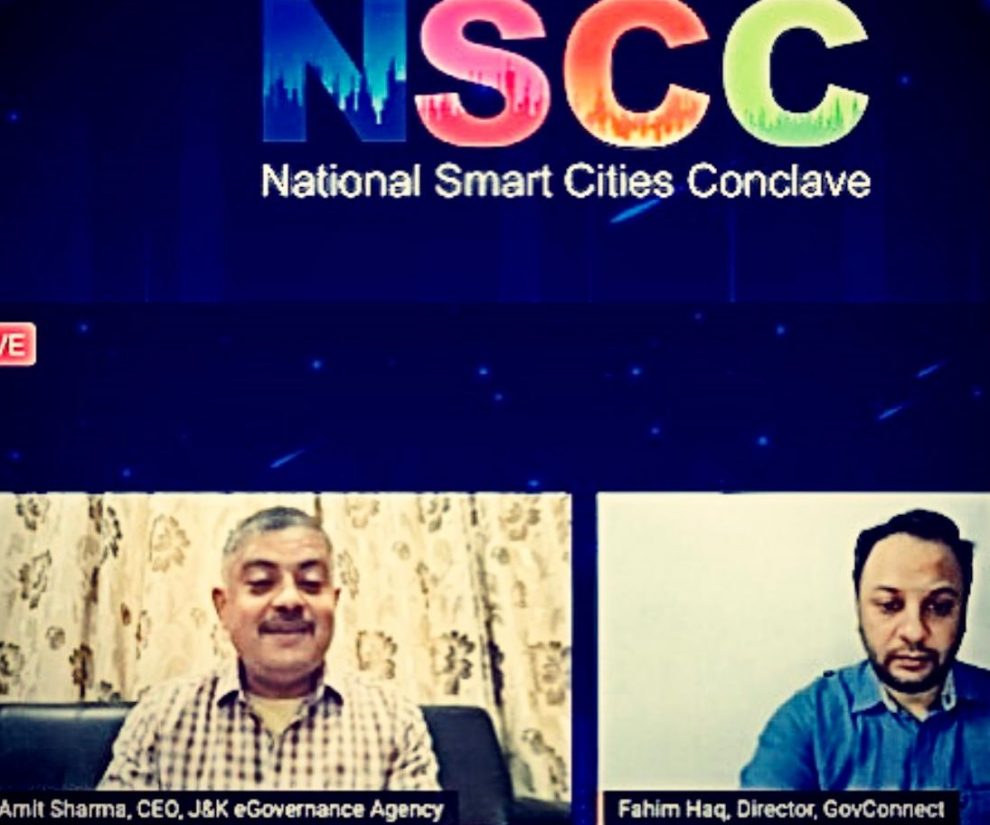 SRINAGAR, JULY 09, 2021: Amit Sharma, Chief Executive Officer, Jammu & Kashmir e-Governance Agency (CEO, JaKeGA) today shared the growth story of the Union Territory of Jammu & Kashmir over the past few years while addressing the virtual gathering in the National Smart Cities Conclave as a Keynote Speaker in the Inaugural Session alongwith other prominent speakers from all across the nation. This exclusive Virtual Conclave at the National Level was organised by GovConnect in collaboration with Greater Warangal Municipal Corporation.

CEO, JaKeGA shared lot of important aspects related to growth which has taken place all across J&K especially with the usage of e-Governance tools during the inaugural session “Smart Sustainable & Resilient Cities – Towards Improving Quality of Living” wherein he also shared that a historically important Project is going to be launched very soon known as “Digital Village Centres” (DVC) through which a direct connectivity shall be established between the top offices led by LG, J&K Office and the Gram Sabhas (Panchayats) across UT which are located at the grass-root level with the usage of latest MPLS network and related technologies.

Amit Sharma said that innovative DVC Project has been conceptualized and conceived by present Chief Secretary of J&K,  Arun Kumar Mehta who has pioneered in successful implementation of lot of e-Governance reforms through Finance Department such as BEAMS, online operation of Treasuries, e-Tender and many similar initiatives which truly led growth story of J&K towards achieving Smart City growth over past couple of years.

He further mentioned that lot of initiatives have been taken under Smart City Mission in J&K for improving the quality of living which include Automated Parking System at Bus Stand Jammu, introduction of Intelligent Traffic Light Systems in both the capital cities of Jammu & Srinagar, Installation of CCTVs in all the major crossings and prominent areas alongwith setting-up of Command and Control Centres in both Smart Cities, installation of Signboards and Hoardings, etc in both Smart Cities, etc.

Apart from this, Amit Sharma mentioned that recently, e-Office Project was successfully launched by JaKeGA in both the Civil Secretariats of J&K wherein all departments have switched over to e-Files and all paper work and physical file work has been dispensed with and now, all HoD and field offices are to be included in e-Office network in the coming days, State Data Centre is being upgraded in a big way to host data of all departments here with the set-up of a DR Centre outside J&K. Other major Smart projects of JaKeGA which are being implemented in a big way include State Wide Area Network (SWAN), Establishment of ICT and CAL Labs for e-learning in all schools of J&K, automation of operations of Jammu and Srinagar Municipal Corporations, Jammu and Srinagar Development Authorities, J&K Tourism Development Corporation, Automation of Hospitals and many other important departments and organisations of the UT.

Before concluding his keynote address, CEO JaKeGA Amit Sharma extended an Invite to key IT organisations for visiting J&K who were participating in this National Conclave in the near future to give their contributions in the ongoing growth story of the Union Territory wherein lot of potential lies towards introducing several SMART City reforms for improving the quality of living for the citizens here.