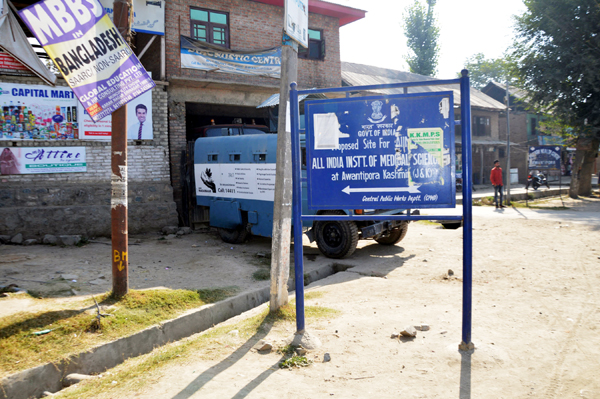 Jammu: A review committee under Union home ministry additional secretary Manohar Agnani has been constituted to steer the approvals for All India Institute of Medical Science (AIIMS), coming up in Pulwama district, co-opting officials from the Central Public Works Department (CPWD), AIIMS and the army.
Recently, the army in a review meeting chaired by Kashmir divisional commissioner PK Pole had red-flagged the possible violation of Works of Defence Act (WODA) in constructing the institute building.

“Indian Army has been in contact with the AIIMS authorities from the inception of the project in 2016 and the latter were informed at the planning stage that Centre’s NOC guidelines have to be honoured for all projects in the vicinity of army establishments. The coordination efforts have been proactive since inception,” a defense spokesperson had said in a press statement.

The defence official had added that the army was told that the plan would be reviewed based on the security concerns put forth.

“Based on a ground assessment, the divisional commissioner had assured the army that their security concerns will be factored into the construction/ layout plans, and instructed the CPWD and Pulwama DC, accordingly. A review committee under additional secretary Manohar Agnani has been constituted at the central level to steer the approvals co-opting CPWD, AIIMS and army officials,” the spokesman said.
He informed that the construction works on AIIMS buildings which are not violating the NOC guidelines are progressing as per the schedule.

“Adequate alternate space is available for the affected buildings and balance work is to resume once the amended campus layout is approved. All concerned are working speedily to avoid any delays. Indian Army, in close coordination with the civil administration, remains committed to extend all assistance to the AIIMS authorities for early execution of the project,” he said.

Two AIIMS were approved by the Centre in 2019, one in Jammu and another in Kashmir. The projects were scheduled to be completed by 2025.

PDP chief spokesman Suhail Bukhari had on Friday demanded that the issue be resolved at the earliest as health institutions were need of the day.