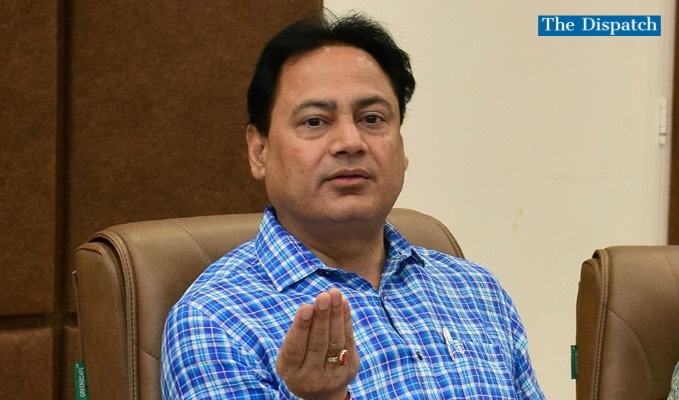 Jammu: Announcing the launch and schedule of Special Summary Revision in Jammu & Kashmir, Chief Electoral Officer Hridesh Kumar Singh today said that anyone ordinarily residing in the Union Territory can enrol as voter.

Singh’s statement has invited sharp reaction as census of 2011, a critical base for the latest Delimitation exercise, or the domicile certificate, a replacement for the State Subject prevalent before the Constitutional changes of August 2019, has not been suggested as eligibility for enrolling as voter in Jammu and Kashmir.

Addressing a press conference at Nirvachan Bhawan here this morning, Singh said, “after abrogation of Article 370 a number of people who were not voters earlier can now enrol as voters in Jammu and Kashmir”. “It is simple. A rule is available in the Representation of Peoples’ Act in the country, and accordingly, a person should be ordinarily residing in the Union Territory”

Singh further said, the decision to determine the ordinarily residing person rests with the ERO (Electoral Registration Officer) or AERO of that (particular) constituency. He explained: the ordinary resident could be a resident of any other state who may be ordinarily residing in Jammu and Kashmir for the purpose of government service, education, labour or business etc”.

“Being permanent resident of Jammu and Kashmir is not necessary to enrol as voters in the Union Territory”, said Singh.

The Chief Electoral Officer’s statement has invited sharp reaction from political leaders and ordinary residents of Jammu and Kashmir who have alleged that this could cause an imbalance in electoral demography.

The Reorganisation Act of 2019, rolling out new set of rules replacing the Constitution of Jammu and Kashmir, has provided for a fresh Delimitation exercise based on 2011 census of population. The Delimitation Commission, which presented its final award in May 2022, has already been criticised by almost all non-BJP actors on several counts including skewed population adjustment.

In early 2020, the Center rolled out domicile laws declaring that a person residing in Jammu and Kashmir for at least 15 years will now be eligible to be a domicile of the Union Territory.

In the gazette notification, on April 30, Section 3A of the J&K Reorganization (Adaptation of State Laws) Order, 2020, under the J&K Civil Services (Decentralization and Recruitment) Act, it was introduced to define domicile as that who has resided for a period of 15 years in the UT of J&K or has studied for a period of seven years and appeared in class 10th or 12th examination in an educational institution located in the UT of J&K.

Now the Chief Electoral Officer’s statement goes beyond the census figures or new categories of domiciles. He says anyone ordinarily residing for the purpose job, education, labour or business would be eligible for registering as voters. This leaves no limit for the size of voters per constituency and could go beyond the award of Delimitation Commission.

Hridesh Kumar Singh’s reference to ‘ordinary residents’ has not been mentioned in the official release of his press conference. He had said this in answer to a question.

In continuation to its earlier notification dated June 29, 2022, the Election Commission of India has further notified the schedule of Special Summary Revision with reference to October 1, 2022 as the qualifying date in the Union Territory of Jammu & Kashmir.

According the schedule, Integrated Draft Electoral Roll would be published by all Electoral Registration Officers on September 15, 2022. Period between September 15 and October 25 has been earmarked for filing claims and objections and all disposals in this regard would be completed by November 10. Checking of health parameters and obtaining Commission’s permission for final publication, updating database and printing of supplements is to be done by November 19, 2022. The Final Electoral Roll would be published on November 25.

The Chief Electoral Officer reiterated that any person attaining the age of 18 years on or before October 1, 2022 and is otherwise qualified to be enrolled as an elector in the Electoral Roll, can apply for his registration during this special summary revision.

Hirdesh Kumar said, ‘Pre-revision activities as well as post delimitation follow up work is going on in the UT, wherein the existing electoral roll is being mapped into the newly delimited Assembly Constituencies as per the Delimitation Commission’s final order made applicable by the Union Law Ministry with effect from May 20, 2022. As part of the pre-revision activities, the process of rationalisation/ re-arrangement of polling stations, removal of discrepancies of demographically similar entries/ similar photo entries, duplicate EPICS, preparation of supplements and integrated draft roll is also going on at present’.

The Integrated Draft Roll, with reference to October 1, 2022 as the qualifying date, would be published by all EROs of the UT on September 15, 2022, marking the formal beginning of the revision activities.

The Commission has extended the period for filing of claims and objections from 30 days to 40 days: from September 15, 2022 to October 25, 2022. During this period Special camps would also be organised by CEO Jammu and Kashmir on weekends for which the date will be publicised separately.

Objections could be filled through multiple platforms- offline by submitting a hard copy in prescribed format before ERO/ AERO or concerned BLO and online objections and claims could be filled by logging into https://www.nvsp.in portal or by downloading Voter Helpline App (VHA).

The final electoral roll after due disposal of all claims and objections filed within the stipulated time period would be published on November 25, 2022.

There is no change in Form 6A. Form 7 which is used for objection to proposed inclusion/ deletion of a name in existing electoral roll shall remain to be for the same purpose with a slight modification that a provision for attaching a death certificate has also been incorporated.

Form 8 has under gone a major change and can be now used for multiple purposes like, correction of any particulars, shifting of residence (within or outside constituency), replacement of EPIC and marking of persons with disability. Form 8A, which was earlier used for shifting within constituency has been abolished now, as the same provision is made in the new Form 8.

In addition to these a new Form 6B has been introduced for capturing Aadhaar number of the existing electors. All Forms (wherever required) have been suitably modified to capture Aadhaar number from the new electors.

Besides provisions of Aadhar linking, no application for inclusion of name in electoral roll shall be denied and no entries in electoral roll shall be deleted for inability of an individual to furnish or intimate Aadhaar Number. It has been emphasised that while handling Aadhaar number of the applicants, the provision under Section 37 of the Aadhaar (Targeted Delivery of Financial and other Subsidies, Benefits and Services) Act, 2016 must be adhered to. Under no circumstances should it go public. If the electors’ information is required to be put for public display, the Aadhaar details must be removed or masked. A Time bound drive is being started for collection of Aadhaar number of the existing electors by or before April 1, 2023.

Furnishing of Aadhaar number is purely voluntary. Objective of the programme is to establish the identity of electors and authentication of entries in Electoral Roll, the CEO maintained.

For the purpose of improving the health of the electoral roll, the Election Commission has emphasised the need for field verification by the Booth Level Officers. There is a mechanism for supervision and checking for enforcing strict accountability of the work performed by different levels of electoral machinery, such as Supervisors, EROs and AEROs by field verification. Similarly, DEOs, Roll Observers and CEOs also check the work done by EROS before the final decision on claims and objections is taken.

Besides, Officers from ECI and offices of CEOs are also deployed to further random checks and to supervise. Respective Divisional Commissioner have been designated Roll Observers in their respective divisions for the purpose of supervision the Electoral Roll work.

‘With a view to ensure more involvement of political parties, the Commission has allowed Booth Level Agents (BLAs) of recognised political parties to file applications in bulk, subject to the condition that a BLA shall not submit more than 10 Forms to BLO at one time/in one day. If a BLA files more than 30 Applications/Forms during the entire period of filing claims and objections, then cross verification must be done by ERO/AERO themselves. Further, the BLA will also submit a list of application forms with the declaration that he has personally verified the particulars of the application forms and is satisfied that they are correct.’

Join The Dispatch Whatsapp Group to stay updated
The Dispatch is present across a number of social media platforms. Subscribe to our YouTube channel for exciting videos; join us on Facebook, Intagram and Twitter for quick updates and discussions. We are also available on the Telegram. Follow us on Pinterest for thousands of pictures and graphics. We care to respond to text messages on WhatsApp at 8082480136 [No calls accepted]. To contribute an article or pitch a story idea, write to us at [email protected] |Click to know more about The Dispatch, our standards and policies
TagsEnrolling as Voter in Kashmir Hridesh Kumar Singh IAS Jammu Kashmir Delimitation Jammu Kashmir Elections Ordinary residents as voters in Jammu Kashmir