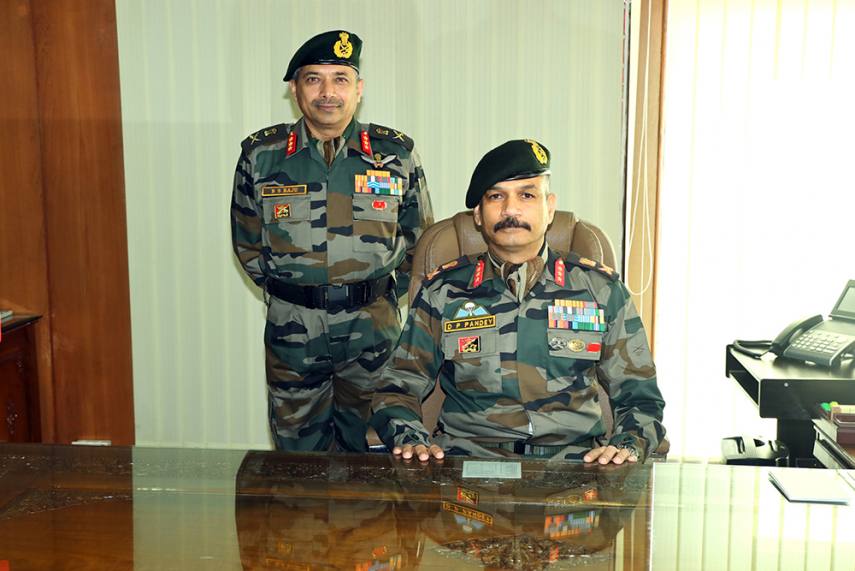 Srinagar: The agreement between India and Pakistan last month to strictly observe ceasefire from February 25 has brought succour in the lives of people living along the Line of Control (LOC) but it is too early to draw conclusions, Chinar Corps Commander Lieutenant General DP Pandey said on Thursday.
He said in an interview that terrorist incidents in Kashmir have been on the decline and are virtually half compared to last year.
He said the Pakistani Army uses ceasefire violations to assist infiltration attempts and “we need to see another couple of months how they behave”.
“We should not draw too many conclusions out of the ceasefire pact. It is too early for it. Most importantly, it has brought succour to the lives of people living along the LoC who have suffered huge loss of lives and property. Ceasefire violations cause undue harassment and the decision is a great step forward,” Lt Gen Pandey said.
India and Pakistan had in February agreed to strictly observe ceasefire agreement along the Line of Control (LoC) and all other sectors from February 25.
The two DGMOs had agreed to address each other’s core issues and concerns which have the propensity to disturb the peace in the interest of achieving mutually beneficial and sustainable peace along the borders.
Lt Gen Pandey said there has been adherence to the norms concerning ceasefire from the Pakistan side.
“Pakistani Army primarily use ceasefire violence to assist in infiltrations attempts. We need to see another couple of months how they behave. We will only have the benefits of the pact if there will not be any infiltration,” he said.
“The instances of terrorism in the valley have been on the decline. They’re virtually half, as compared to last year,” he added.
Answering a question on attempts at recruitment of local youth in terrorism, Lt General Pandey said Pakistan is trying to indigenize terrorism in Kashmir.
“I do not think Pakistan’s intention and interests in terms of facilitating terrorism in Kashmir has changed. What has basically changed is the intent to indigenize it. For the last few years, Pakistan terrorists aren’t leading attacks, but primarily instigating local terrorists,” he said.
The senior Army officer said the attempt to indigenize terrorism in the valley is part of a larger design and security forces are aware of it.
“Civil society needs to protect their youth, to not let them being misguided because the people who are misguiding them are well covered up and their children are going to good schools leading normal lives. There have been a number of cases when parents came to us, to JK Police and told us that their kids have gone astray,” he told ANI.
Lt Gen Pandey said they are making efforts to stop recruitment and are also taking action against the network which is perpetuating this cycle of violence.
Speaking on preparedness for Amarnath Yatra, Lt Gen Pandey said due security preparations have been done.
He said 99 per cent of the civil society of Kashmir is nationalistic.
“The LG himself is looking into the arrangements and the security forces are all prepared for any eventuality,” he added.
Referring to incidents of terrorists targeting Army personnel on vacation, Lt Gen Pandey said these were acts of cowardice.
“These acts of cowardice show frustration on their part. Our soldiers have been advised to be careful. But the fact of the matter is that there are local population who protect them. We have given certain advisories which they follow. These attacks are not the norm, they are exceptions,” Pandey said.