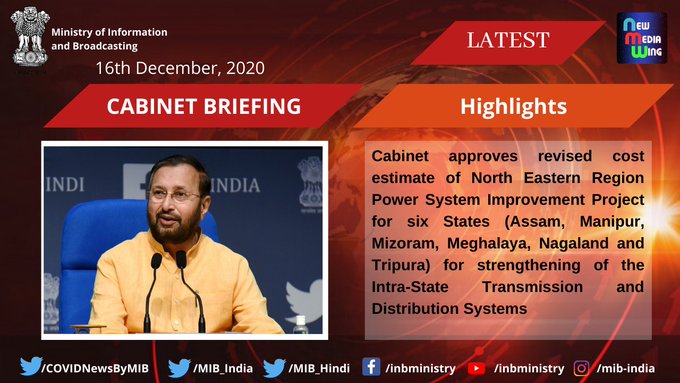 Briefing media in New Delhi, Information and Broadcasting Minister Prakash Javadekar said, main objective of the project is Government’s commitment for the total economic development of North Eastern Region and to strengthen the Intra-State Transmission and Distribution Infrastructure in the Region.

He said, implementation of the scheme will create a reliable power grid and improve North Eastern States’ connectivity to the upcoming load centers and thus extend the benefits of grid connected power to all categories of consumers in North Eastern Region.

He said, Cabinet has taken the decision to help farmers directly by depositing money of subsidy into their accounts.

The subsidy will be given on 60 lakh tonnes of sugar exports at the rate of Rs. 6,000 per tonne.

It will benefit five crore farmers and five lakh workers.

Communication and IT Minister Ravi Shankar Prasad said that a total of 2,251.25 MHz is being offered with total valuation of Rs. 3,92,332.70 crore at reserve price.