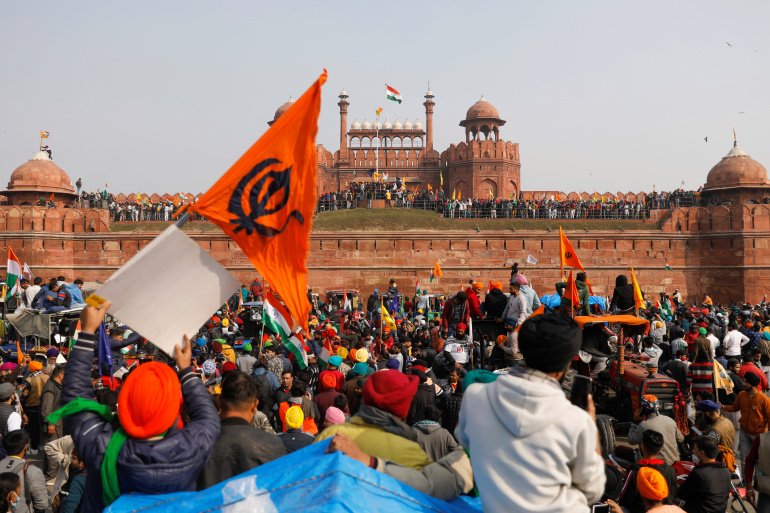 Nothing ever good comes out of violence. This lexicon comes to mind as the Capital witnessed unprecedented anarchy leaving it shell shocked, that too as it celebrated its 71st Republic Day last week. At one end was India showcasing its pomp and grandeur on Rajpath, at the other untold mayhem as the farmers tractor rally deviated from its designated route agreed upon with the police, violently broke through police barricades clashing with security personnel, vandalized buses and police vehicles, destroyed public property, stormed the Red Fort and audaciously unfurled Sikhs religious flag Nishan Sahib. In one fell stroke the kisan had transformed into a hooligan leaving a nation shaken and shamed.

True, the 40 Unions have distanced themselves from the violence and alleged miscreants who created chaos, but there is no denying that the events have tarnished, damaged and dented their novella peaceful movement as the nation’s undataas so assiduously built up over the last two months on Delhi’s borders. Today, public sympathy seems to be weaning away.

The aam aadmi’s common refrain: Their objections on the three contentious farm laws might be legitimate yet nothing can justify taking law into their own hands and brandishing swords and lathis at Red Fort which is viewed as a symbol of Indian sovereignty.

Perhaps, farmers puffed up with the nascent response to their protest and having put the Government under tremendous pressure to concede most of its demands, miscalculated their ability to control or moderate their motley crowd comprising 40-odd farmers unions with different backgrounds and ideology. Forgetting that large mobilization of people carries an inherent potential of disorder and rogue behavior. That these elements were allowed to run amok is condemnable.

By taking a maximalist position against the Bills and turned their back on a negotiated settlement, maybe frustration was building up among kisan ranks resulting in the bedlam. Already three Unions have disassociated themselves and returned to their villages. Barring, Singhu border, protests at Tikri and Chilla are petering out. However, the UP Government’s mishandling of Rakesh Tikait’s Bharatiya Kisan Union at Ghaziabad seems to have reignited his movement.

The police also must introspect as to where it went wrong. Why did it allow the rally in the first place? Did it underestimate the scale of the farmers procession? Specially as it had intelligence inputs that miscreants had penetrated the rank and file of farmers and could turn violent? Why did it not make sure adequate safeguards were in place, be operationally prepared and warn the political establishment? Or did it willy nilly agree to play along with its political masters to humour the farmers?

Undeniably, the Government which first ignored the farmers protest, then played hardball by discounting their demands as ignorant and even dubbed them anti-nationals and Khalistanis, then showed patience and willingness to accommodate a number of requirements by offering to amend the laws. And showed them experts opinion that reforms would double their incomes by 2022.

Notwithstanding its offer to freeze the laws for 18 months and work towards a mutually acceptable negotiated settlement, sadly, the script continues to be stuck between the Sarkar’s offer and the farmers demand for repeal of the contentious laws. Both operating across a wide chasm of belief and trust.

The protesting farmers are apprehensive that they will no longer get paid the Minimum Support Price, Government will scrap mandis, commission agents will not get their commission thereby leaving them at the mercy of big corporates and States tax. Said a kisan leader, “Our public stand is a full repeal, but we can negotiate provided the Government is ready to provide remunerative MSP as a legal entitlement to all farmers for all produce.”

With manic Republic Day changing contours of the challenge and farmers being on the back-foot and apologetic, the Government instead of accusing them should now show magnanimity and play soft. It needs to reach out to kisans and win back their trust. Simultaneously it should use the ongoing Budget session of Parliament to break bread with the Opposition, discuss threadbare the contentious laws and move ahead. Agriculture reforms encompass the country and not the exclusive domain of the BJP or X,Y,Z Party.

Various Parties directionless leaders like Messers Rahul Gandhi, Pawar, Mamata, Akhilesh etc who have tried unsuccessfully to piggyback on farmers shoulders too should realize the kisans have shunned them unilaterally as they do not want to be used as sitting ducks or props for leaders to carry of their own agendas, whip the Government with to settle scores with the Modi Sarkar.

Undoubtedly, protest is a fundamental right to bring to the Government’s notice what is not acceptable or odious but sweeping and uncompromising politics of heads-I- win-tails-you-lose on laws is unjustifiable as one cannot appropriate law-making powers of the legislature as it would be setting a wrong precedent for the future which as last week shows, can turn volatile. The farmers too should be more flexible even as the powers-that-be whittle down their anathema to discordant notes against its Government and cannot dismiss every agitation “anti-national” and denounce it.

The leaders must now work quickly and throw out the unruly elements and fundamentalists from their ranks. But before that they must recognize the damage to their cause by accepting all under one umbrella failing to realize a broad coalition can result in collateral damage. Time to rethink strategies.

It is not too late for a course correction. Both the Government and farmers should not make it an ego battle and find a middle path to create greater goodwill on all sides. The farmers might have genuine grouses. But this is not the way to go about getting the Government to see reason. By remaining stubbornly inflexible they are creating a perception of being more interested in grandstanding wanting to humble the Government than seeking an equitable solution to their woes.

Clearly, this maximalist position of repeal of the three laws by the farmers tantamount to blackmail. Obviously no Government will tolerate blackmail and ‘it’s my way or the highway’ muscle flexing as it would open the flood gates for more bodies and lobbies holding the Administration to ransom, challenging its authority.

Of course, the farm laws might not be perfect or 100% fool-proof, but perhaps with more amendments, they could have the potential to provide a much-needed framework of change for the agricultural sector while simultaneously protecting the farmers’ interests. Clearly, the time has come for kisans to climb down from their stubborn intransigence and restart negotiations with the Government in the larger interest of farmers and the country. Sagacity must prevail The Government must be thoughtful and measured in its response. It needs to tone done the shrill. Remember, no movement can succeed it turns into a confrontation with the Indian State. The onus lies on both sides to resolve it earliest. Let not truth become a casualty where you end up with only babble and bedlam.