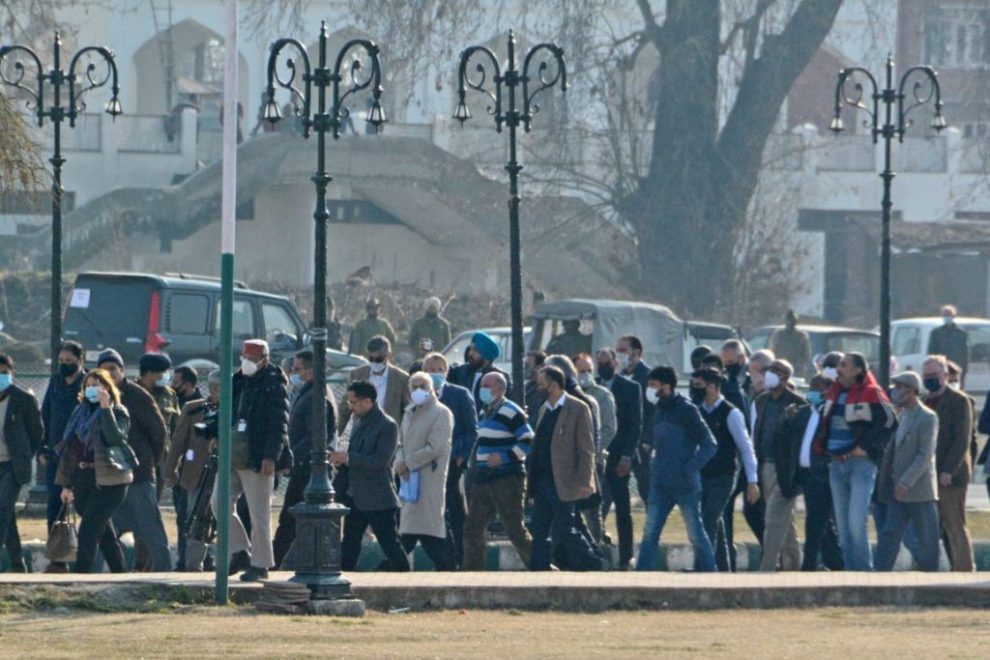 Much is being made of the ongoing visit of the European Union Parliament Delegation to Kashmir, the latest in the series of such visits at the behest of the Central government in New Delhi, since the abrogation of Article 370 and Article 35A of the constitution of India. The latest visit comes in the backdrop of the successful and peaceful conduct of DDC elections in the newly created Union Territory of Jammu & Kashmir. But questions have been raised on the credibility of conducting such exercise, which many critics have dismissed as politically sponsored, stage managed and propaganda events conducted as a mere public relation exercise to cater to international audience. So, therefore a genuine broader question that arises of these visits is whether they serve any purpose at all, especially for the people of Kashmir valley?

It is important to mention here that after the 9/11 attacks in New York, Kashmir dispute, which used to garner much international support before has been witnessing a gradual disengagement of the global community. Since then, the Kashmir dispute has slowly been relegated to a “bilateral dispute” between India and Pakistan and in last few years, it is now being accepted only as an internal political problem of India, among the wider global community. Even most Muslim majority nations including both the Islamic Republic of Iran and Saudi Arabia seem to be following that line and so does the Organization of Islamic Countries. There are many complicated commercial, defense, strategic, business and political reasons for this state of affairs, covering which is beyond the scope of this article.

Today the international scrutiny and interest in Kashmir stands at its lowest. While few articles appeared in international news portals after the abrogation of Article 370 of the constitution of India, the world soon turned its head away from Kashmir, as the Corona virus pandemic started ravaging the globe. No one takes Pakistan’s propaganda laden support to Kashmir seriously in the global community. So, under these circumstances, what should the people of Kashmir do?

Honestly speaking the people of Kashmir have very few choices left. Like it or not, but the people of Kashmir have to make their voice heard within the limited space that is left for them in the dramatically changed political circumstances. The active involvement of Pakistan, the operation of militancy and the rise of religious radicalism has created an image of Kashmir, which does not help its case. We also have an additional shame of the mass exodus of our religious minority community at the beginning of 1990s. All these factors are important, when we make outsiders listen to our political grievances. This political whataboutery is something that every Kashmir has to face and answer.

But will raising question on the credibility of the individual members of the visiting European Parliament delegation or on the collective motive of the entire delegation help us the people of Kashmir achieve anything? Even if there are serious ethical questions regarding the transparency and objectivity of the intention of the visiting European Parliament delegation, there is however no harm in reaching out to them. We, the people of Kashmir must reach out to anyone who is coming to meet us. The question of credibility is very subjective one. One man’s hero is another man’s traitor and in a highly politicized dispute like Kashmir, it is also naïve to expect any transparent and unbiased intervention. Every party to this 7-decade old dispute has some political backers, so what if the visiting European Parliament Delegation also has one.

It is not that there is nothing concrete that, we the people of Kashmir cannot talk to the visiting members of the delegation. If, we want that our voices do indeed reach out to the wider global community, we must not push for only one side narrative, which will not give us an access to wider global community. We, the people of Kashmir have full right to apprise the world community regarding some of our very serious concerns on issues like that of our fear of change in demography of Kashmir valley after the abrogation of Article 370 and change of administrative status of the erstwhile state of Jammu and Kashmir. But at the same time, we must also acknowledge that some of the political changes that took place on ground like the successful conduct of DDC elections was indeed one the positive outcomings of the changes that took place after August 5, 2019. The widescale participation of women and tribal community mandated by law did indeed opened a level playing field to many aspiring politicians for whom such endeavors would not have been possible otherwise. DDC elections also opened space for many aspiring young politicians from poor and non-political families to formally enter into electoral politics of Kashmir.

Therefore, the whole scale casting aspirations on the credibility of such international visiting delegations as state managed tours and thereby rejecting them does not do us any good, especially when the global interest in Kashmir remains at its lowest in view of long fatigue, changed international political equations and raging pandemic. If at all, we the people of Kashmir must make the best use of every single opportunity of outreach that comes our way and that will be possible only if we present our grievances before the world community in holistic manner, without misusing them for pushing political propaganda. We must be as much ready to tell the world about us as much as we must listen to them and answer their questions on our own conduct. This might actually lead to a sustainable peace finally return to Kashmir valley.

Return of Politics in Kashmir?

The trees worshipped by Hindus

He is a Senior Political Leader of Jammu and Kashmir People's Democratic Front. He Can be reached @Javedbeigh across Social Media Platforms. Views are his personal.

Why did the Dragon relent
Good Samaritan Law: Helping those who help road accident victims
Comment