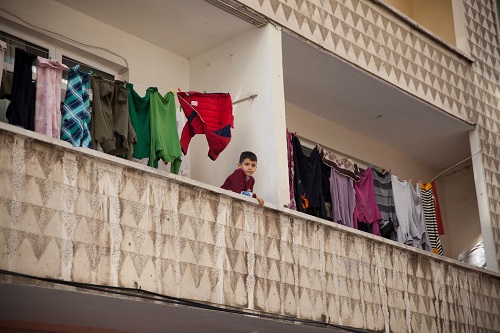 ISTANBUL: Leaning out of the ground-floor window of her home on a quiet street in suburban Istanbul, Aylin Yilmaz knows the house she has shared with her husband and two children for 20 years could easily be destroyed by an earthquake.

Scientists have long predicted that Bagcilar district, where Yilmaz lives, would suffer some of the highest rates of casualties and building damage if a major earthquake hits Turkey’s largest city.

But, her family cannot afford to make the structural changes that would keep their house standing through a massive seismic event and the government has offered no help, said Yilmaz, whose name has been changed to protect her identity.

“What can I do about it if there is an earthquake? I can’t do anything. I’m just sitting here. So if I die or not, it’s up to God,” she told the Thomson Reuters Foundation.

Following a magnitude-6.9 earthquake that destroyed or heavily damaged more than 340 buildings and killed 115 people in the city of Izmir in October, scientists are sounding the alarm over how much damage Istanbul could sustain in the next big earthquake.

Pointing to the dangers of unregulated construction and old building stock, they warn that the government urgently needs to act on the city’s earthquake preparedness plans to reduce the risk of mass casualties.

“We have the rules, recommendations and road map,” said Haluk Eyidogan, an expert in seismology engineering and member of the Chamber of Geophysical Engineers of Turkey, a nonprofit organisation.

“We have to (start) immediately … to make a disaster-resilient society and system,” he said.

Earthquake researchers predict there is a 95% chance that an earthquake of magnitude 7.0 or stronger will strike the city within the next 70 years.

An earthquake of that strength would heavily damage or destroy an estimated 194,000 buildings, according to the latest version of Istanbul’s Earthquake Master Plan, published in 2018.

That would leave more than 10% of Istanbul’s 15 million residents homeless, said Eyidogan.

Much of the risk comes from the rapid, largely unregulated development carried out as the city struggled to accommodate all of the people migrating from the Anatolia region to find work in the financial capital over the past 15 years, he explained.

“As we do not believe that building regulations were applied correctly in Istanbul in the past, we … have increased risk avoidance efforts by 2020, both in terms of legal tools and implementation,” he said.

In the rush to house the city’s growing population, many construction projects – such as adding floors onto existing buildings – are unplanned and skirt building standards, said Dogan Kalafat of the Kandilli Observatory and Earthquake Research Institute (KOERI).

Hoping to tackle the wave of illegal construction, the government launched a building amnesty in February 2019, which received applications from 7.4 million illegal structures.

Istanbul has had an Earthquake Master Plan since 2003, outlining emergency response, preparedness and recovery procedures for the metropolis.

When asked what action has been taken since the report’s 2018 update to prepare Istanbul’s buildings for a major earthquake, Kahraman sent the Thomson Reuters Foundation a 14-point outline.

The list includes public workshops, warning systems, loss estimate booklets for all of Istanbul’s 39 districts and the creation of a tsunami action plan, as well as commitments to complete further studies and maps.

Kahraman confirmed that no buildings have been reinforced or rebuilt according to earthquake-resistant standards set out in the Master Plan.

He said the municipality is still carrying out assessments of buildings, with the aim of eventually making a “risk ranking” of 790,000 buildings.

The last time Istanbul felt the effects of a massive earthquake was in 1999, when a magnitude-7.4 earthquake in the city of Izmit killed more than 17,000 people.

Since then, Istanbul has seen rapid development, with several urban transformation projects, mass housing construction and the building of high-rises – there are now 1.16 million buildings in Istanbul, according to the 2018 Master Plan.

Kalafat argued there is not enough time to assess all the buildings one-by-one before deciding on which to renovate or rebuild.

“It will be fastest and most realistic to rebuild risky structures in an earthquake-resistant manner by using existing (housing) information,” he said.

He recommended that the government start with buildings already known to be unstable and rebuild them using earthquake-resistant design elements such as high-quality concrete and iron reinforcements.

‘LEFT ON THE SHELF’

In Istanbul’s first Earthquake Master Plan, the district of Zeytinburnu was chosen as a pilot area.

It is considered one of the city’s most vulnerable districts because it flanks the Marmara Sea, which lies over a section of the North Anatolian Fault Zone, one of the most active fault lines in the world.

Among other recommendations, the plan said buildings in Zeytinburnu should be structurally strengthened and highlighted the need for the government to set up emergency shelters in the area and prepare for the loss of vital infrastructure.

But, none of that has happened, said Eyidogan, the engineer.

“(The plan) was just left on the shelf, no one touched it,” he said.

Eyidogan pointed to several high-rise buildings that went up in Zeytinburnu two years ago.

“(The government) constructed these … just for high-income people to watch the Marmara Sea. And what happens to the low-income people? They stay in their (unsafe) buildings,” he said.

Neither the Ministry of Environment and Urbanisation in Ankara nor the Disaster and Emergency Management Authority responded to requests for comment.

At her home in Bagcilar, Yilmaz said the government has passed the responsibility of checking buildings for earthquake resilience to the homeowners.

The trouble is, she said, this requires the agreement of all neighbours in the building.

“We can’t even paint the building because the other neighbours can’t agree, they can’t afford it, or they don’t want it,” she lamented. “So, how can we check the building?”