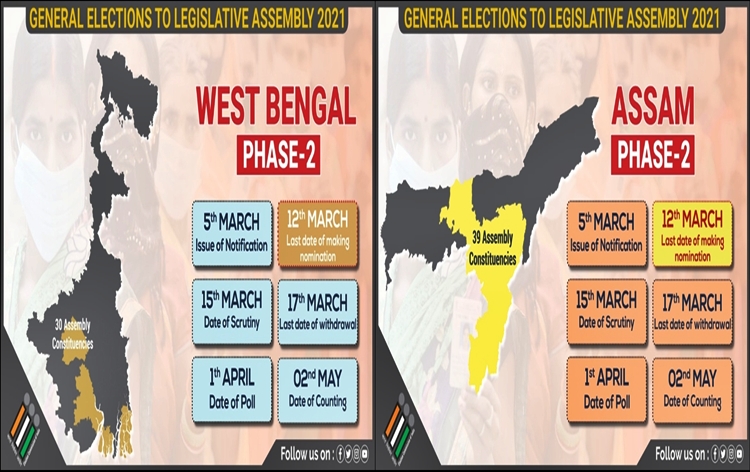 Campaigning for second phase of Assembly Elections in West Bengal and Assam will end today evening.

In West Bengal, campaigning for the second phase of assembly elections will end today. 171 candidates including 19 female candidates are in the fray for 30 seats spread over 4 districts. 9 seats each in East and West Medinipur, 8 seats in Bankura and 4 seats in South 24 Pargana will go to polls on 1st of April. Candidates in this phase range from seasoned politicians to actors, from former ministers to former cricketer and former IPS officers as well.

Leaders and candidates of all political parties are busy in last minute campaigning today.

Trinamool Congress Supremo and Chief Minister of West Bengal Mamata Banerjee will continue her road shows in the constituency.

At the same time, electioneering for the later phases is going on. Leaders of BJP, Trinamool Congress and Sanyukta Morcha will be criss-crossing the districts to woo the voters.

In Assam, campaigning for the second phase of assembly elections will end today. A total of 345 candidates are in the contest in this phase including 26 women. Polling in this phase will be held on 1st of April. Several star campaigners will address election rallies today to woo the voters.

Meanwhile, this election has witnessed participation of several journalists in the race to the state assembly. AIR correspondent reports that after covering election campaigns as a journalist, some of the senior scribes grabbed headlines this time as a candidate.  Senior journalist Adip Phukan who worked in various capacities earlier is trying his political luck at East Guwahati seat for Assam Jatiya Parishad. Against him, Raijor Dal who is in alliance with Assam Jatiya Parishad has given ticket to former news presenter Diwas Phukan.

Another former senior scribe Manjit Mahanta is vying for the prestigious Dispur seat. He is a member of the Anchalik Gana March, a partner of the Mahajoth or grand alliance but submitted his nomination for Congress. A former IIS officer, the state BJP President Ranjeet Kumar Dass , who is contesting from Patacharkuchi seat in this election,  worked as a journalist. The Congress fielded former journalist Kishor Bhattacharya from Kamalpur seat.