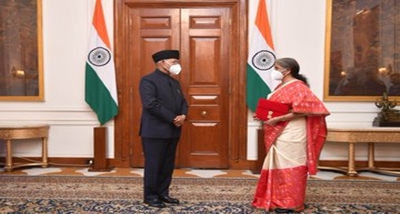 The Cabinet chaired by Prime Minister Narendra Modi approved the Budget for the fiscal year 2021-22.  Earlier, Finance Minister Nirmala Sitharaman called on President Ram Nath Kovind before presenting the Union Budget 2021-22 in Parliament. MoS Finance Anurag Thakur and senior officials of the Ministry of Finance also were present during the meeting.

As per established tradition, the Finance Minister meets the President at the Rashtrapati Bhawan before heading to Parliament. Traditionally, copies of the Budget are brought to the Parliament complex before the Finance Minister arrives, this year no document has been printed following the COVID-19 protocol.

The Budget copies will be disseminated electronically, with documents being uploaded on the government website as well as being made available on a special app developed for the same.