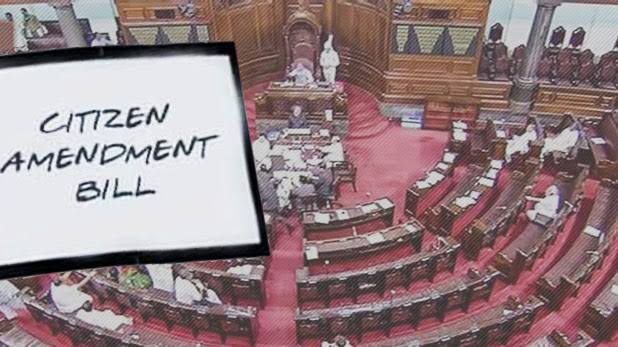 After hours of debate, the Upper House of the parliament on Wednesday passed the contentious Citizenship (Amendment) Bill (CAB), which has evoked mixed responses from across the political arena.
The Bill smoothly sailed through Parliament after the Rajya Sabha passed it on Wednesday As many as 125 members of the Upper House voted in favour of the Bill while 105 MPs voted against the Bill. The Shiv Sena did not participate in the voting. Home Minister Amit Shah said the Bill will give a new ray of hope to non-Muslims who migrated to India due to religious persecution in Pakistan, Afghanistan and Bangladesh.

“On passage of the Citizenship Amendment Bill in the Parliament of India, I heartily congratulate respected Prime Minister Narendra Modi ji and Union Home Minister Amit Shah ji. I also thank all the members who supported the #CAB2019 Bill,” Haryana Chief Minister Manohar Lal Khattar tweeted.
Uttar Pradesh Chief Minister attacked Congress party after the passage of the Bill and said it has revealed the ‘true face’ of Congress party and allies.”I express my heartfelt gratitude to Prime Minister Modi and Home Minister Amit Shah. This golden day of the Parliamentary history of India became possible only due to Modi ji. It also revealed the true face of Congress party and its allies,” said Yogi.

However, the passage of the Bill attracted fierce backlash by Congress and other opposition leaders.
“Another instance of abusing brute majority…….#CABAgainstConstitution,” Congress leader Ahmed Patel tweeted on Wednesday.DMK leader MK Stalin also lamented the passage of the Bill in the Parliament and termed it as a ‘direct assault’ on secularism, equality and fraternity.

“It is unconstitutional to link citizenship with religion. #CAB2019 is a direct assault on secularism, equality and fraternity – principles which are essential to any democracy. AIADMK once again stands completely exposed for its decision to support this immoral legislation,” Stalin tweeted.
The Bill, which grants citizenship to the non-Muslims who arrived in India before December 31, 2014, was approved by the Lok Sabha on Monday night with a majority of 311 votes against 80 votes where 391 members were present and voting.