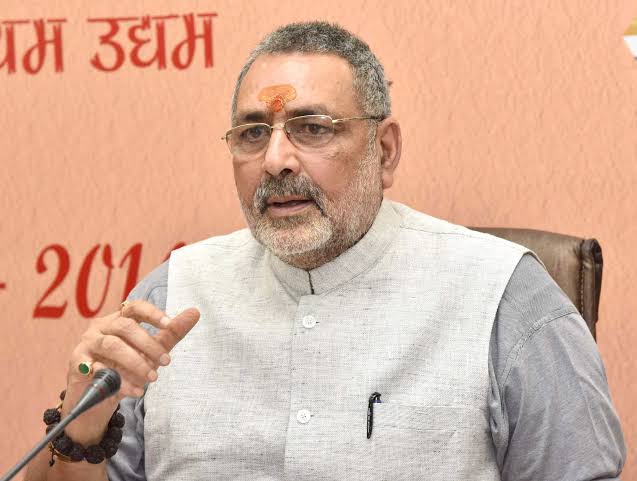 Union Minister Giriraj Singh on Monday said that the Citizenship Amendment Bill to be introduced in Parliament today is necessary to protect members of non-Muslim communities from India’s neighbouring countries.
“The women of the non-Muslim communities in our neighbouring countries are not safe. For the protection of non-Muslim communities from our neighbouring countries, the Citizenship Amendment Bill is going to be tabled in the parliament. It is our duty to enact this law in the interest of our brethren across the borders,” Singh told reporters here. “In a democracy, everybody has got a right to protest. But is it not true, that the country’s partition took place on the basis of religion? In India, we accepted the policy of equality of religions. But in Pakistan and Bangladesh the non-Muslims are being exploited,” he added.Union Home Minister Amit Shah will introduce the Bill today.

The Citizenship (Amendment) Bill 2019 seeks to grant Indian citizenship to non-Muslim refugees from Pakistan, Bangladesh, and Afghanistan.Through this bill, Indian citizenship will be provided to the members of Hindu, Sikh, Buddhist, Jain, Parsi and Christian communities, who have come from the three countries to India till December 31, 2014, to put an end to them being treated as illegal immigrants in the country.
It is important to note that the Bill was passed by the Lower House of the Parliament earlier this year but lapsed with the term of the previous Lok Sabha during the first term of the Prime Minister Narendra Modi government in the Centre.