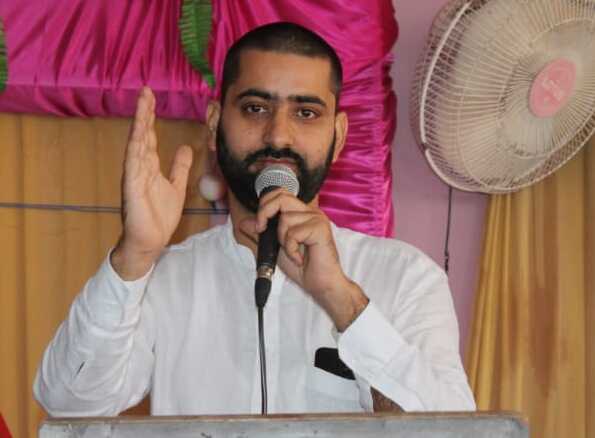 JAMMU: Apni Party Youth Vice President J&K, Raqeeq Ahmed Khan today accused bureaucracy of misleading Lt Governor Manoj Sinha from the ground reality regarding Rehbar-e-Janglat, Rehbar-e-Zirat, Rehbar-e-Khel, NYCs and daily wagers.
In a strong statement issued against the decision of the committee, Khan said that it was really unfortunate to learn that the committee which was constituted to find out issues and suggest suitable measures regarding Rehbar-e-Janglat, Rehbar-e-Zirat, Rehbar-e-Khel failed to come out with the recommendations.
This committee took one year to submit recommendations with hardly any groundwork about the departments where these Rehbars do work. Finally, they come up with anti-Rehbar’s recommendations which are misleading. They have recommended re-advertisement of posts of Rehbar-e-Janglat, Rehbar-e-Zirat and Rehbar-e-Khel which is not acceptable,” he said.
He said that “With their recommendation, it seems that these Govt officials have misled the LG sahab and avoided to resolve their issues which were assured by the LG sahab himself. The bureaucracy is working against J&K, educated youth and daily wagers by adopting an approach which is responsible for growing unemployment,” he said.
The Govt constituted committee is not aware of ground reality of Jammu and Kashmir that is why they are taking such steps which are anti-youth. However, I want to assure the youth of J&K that the Apni Party’s struggle and fight will continue against injustice,” he added.
The Dispatch is present across a number of social media platforms. Subscribe to our YouTube channel for exciting videos; join us on Facebook, Intagram and Twitter for quick updates and discussions. We are also available on the Telegram. Follow us on Pinterest for thousands of pictures and graphics. We care to respond to text messages on WhatsApp at 8082480136 [No calls accepted]. To contribute an article or pitch a story idea, write to us at [email protected] |Click to know more about The Dispatch, our standards and policies