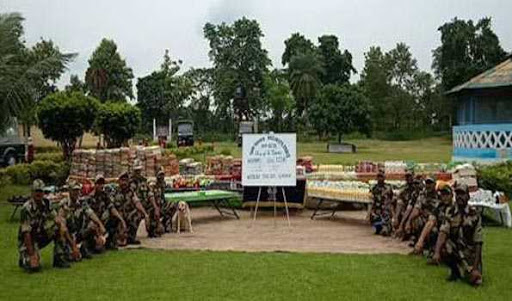 New Delhi, Jul 20: Border Security Force (BSF) on Monday said that its troops at Border Out Post (BOP) of 54 Battalion at Gede Railway Station in Nadia district in West Bengal, has seized smuggled goods worth Rs 46.5 lakh from a wagon of goods train which was going to Bangladesh.

According to BSF, on July 18, while checking the goods train going to Darshana in Bangladesh from Gede, the last station in Indian territory, the alert border men found the seal of a wagon tampered.

When the Force’s  personnel peeped through the gaps of doors, they found some suspicious goods inside it. Troops informed senior BSF officers and subsequently officials of Customs Check Post-Gede as well as Railway Protection Force.

Troops opened the wagon in the presence of Customs and RPF officials and found 30 cartoons of various contrabands such as footwears, cosmetics, mobile phones, different kind of medicines, Banarasi sarees, phensedyl bottles. The total cost of the seized goods were around Rs 46.5 lakh.

This is the second seizure in the goods trains in the last one month,which was a matter of grave concern,  the 54 Battalion Commanding Officer Deeraj Singh said.

The goods were seized by the BSF before the train was cleared by the Railways and Custom officials, allowing it to move further into Bangladesh. The BSF also raised the issue with senior officials of Railway and Customs.

Such a serious lapse cannot take place without the negligence or connivance of black mole in the government system. Complaint has been lodged with Customs officials-Gede for further investigation and seized items have been deposited with them, a BSF official said.