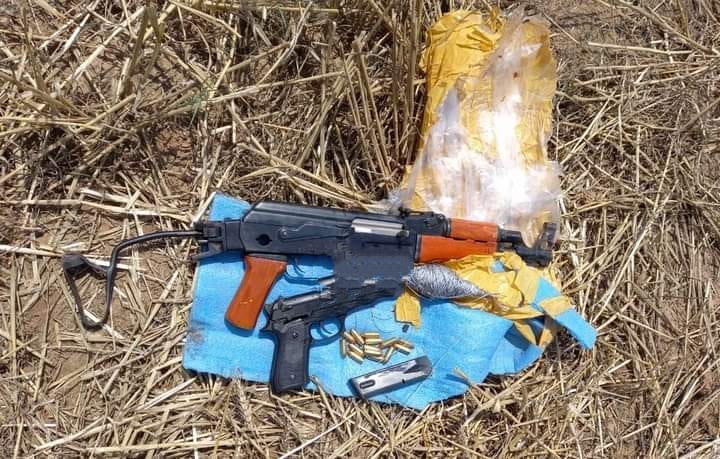 Jammu/New Delhi: The BSF on Friday recovered an AK-47 rifle, a pistol and some ammunition dropped by a Pakistani drone from the border belt of Samba district in Jammu and Kashmir, officials said.

The drone is suspected to have flown back into the Pakistani territory after it dropped the consignment, officials said.

Congratulating the troops, IG, BSF Jammu, N S Jamwal termed the recovery as a “big achievement”, and said the force is ever alert and vigilant on the International Border (IB) to thwart away the nefarious designs of Pakistan.

“BSF troops carried out a search operation in the Samba sector. At about 1215 hours, the troops recovered an item wrapped in a yellow-coloured polythene bag in a field,” a BSF spokesperson said.

After taking due precautionary measures, the packet was opened and one AK-47, one pistol, one magazine, 15 rounds of 9 mm ammunition, one wooden frame, used to attach the payload with the drone, and wrapping material were recovered, the spokesperson said.

He said the recovery was made at a distance of 250 metres from IB inside Indian territory.

The efforts of alert BSF troops deployed in multi-tiered grid have once again resulted in neutralizing the designs of Pakistan, the spokesperson said.

Officials said this was the same area where a tunnel was detected on November 22 last year and a Pakistani intruder was killed on May 5 this year.

In this connection, on June 20 this year, the BSF troops neutralized a Pakistani Hexacopter in Samba-Kathua area and recovered huge quantity of arms, ammunition and explosives, they said.

Several similar incidents, in which arms and ammunition dropped by Pakistan drone has been reported earlier from areas falling along the IB in Samba, Kathua and Jammu districts.

The BSF had recovered bombs dropped by a drone along the IB in Jammu’s Samba sector on February 14, putting security agencies on high alert.

The drone-dropped consignment had six pistols and 14 Improvised Explosive Devices (IEDs) with in-built magnets, which could be used as ‘sticky bombs’ by sticking them on vehicles and controlling them using a timer and a remotely-held device.

On December 21 last year, the Punjab Police had seized 11 hand grenades, suspected to have been dropped by a drone from Pakistan, from a field near the IB in Gurdaspur district, officials said.

On September 22 last year, an arms consignment dropped by a drone operated by Pakistan-based terrorists was seized in Akhnoor sector in Jammu district, they said.

The consignment was seized in a joint operation by the police and the special forces of the Army from Sohal Khad, located at an aerial distance of 13 km from the border.