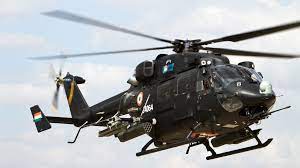 Srinagar: The BSF flew a special helicopter sortie on Thursday to airlift a jawan deployed at a remote post along the Line of Control (LoC) in Jammu and Kashmir so that he could get home, about 2,500 km away in Odisha, in time for his wedding.

Posted at a high-altitude post in the Machil sector along the LoC, 30-year-old Constable Narayana Behera’s wedding is scheduled to take place on May 2, a senior Border Security Force officer said.

As the LoC post is snow-bound and its road link with the Kashmir Valley is currently inaccessible, a military air sortie is the only available mode of transportation for troops deployed at these locations, he said.

The parents of the jawan recently got in touch with his unit commanders, expressing apprehension that their son might not be able to make it for his wedding. They were worried as all the arrangements had been made for the said date, the officer said.

The matter was brought to the knowledge of BSF Inspector General (Kashmir frontier) Raja Babu Singh. He ordered that a Cheetah helicopter of the force stationed in Srinagar should airlift Behera immediately, he said.

The helicopter picked up Behera early Thursday and brought him to Srinagar. He is now on the way to his home in Adipur village in Dhenkanal district of Odisha.

IG Singh said he approved the air sortie as the welfare of troops was his “first and foremost priority.”
DIV

I will bowl above 155kmph one day: Umran Malik
Shah Faesal’s current status: In service of Govt, posting awaited
Comment