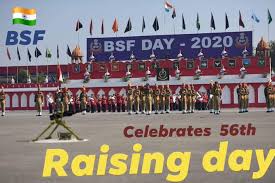 The Border Security Force (BSF) is celebrating its 56th Raising day today. BSF is India’s first line of defence. It was raised in accordance with an Act of the Parliament on 1st December, 1965, soon after the India-Pakistan War of 1965.

Prime Minister Narendra Modi today extended his best wishes to all BSF personnel and their families on their Raising Day. In a tweet, Mr Modi said, BSF has distinguished itself as a valorous force, unwavering in their commitment to protect the nation and assist citizens during natural calamities. He said, India is proud of BSF.

Home Minister Amit Shah also saluted the Jawans of Border Security Force, BSF for their service and dedication on the occasion of 56th raising day of the force. In a tweet, Mr Shah said, BSF has always lived up to its motto ‘Jeevan Paryant Kartavya’ with its valor. He said, India is proud of BSF.