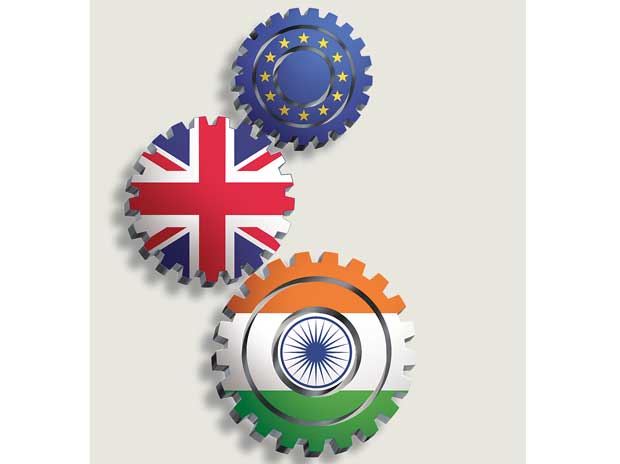 The exit of Britain from the European Union – Brexit – is likely to impact India, businesses based in the UK, IT exports and possible market and currency volatility leading to inflationary pressure on the Indian economy. The Brexit issue is crucial as India’s GDP has a never before contraction since 1952 and Europe has been a major trade destination that has helped the country progress.

Former Reserve Bank of India Governor Raghuram Rajan had said that “We are in the midst of an age of competitive devaluation and beggar-thy-neighbour policy. When elephants fight, the grass suffers.” India therefore has a real concern. Britain is considered as a gateway to the EU for it, but with it opting out, the advantage by India is lost. Therefore, there is a need to get border-free access.

The UK remains the largest source of foreign direct investment (FDI) to India and the Brexit deal may have a significant ripple effect back in India. According to experts, while the Brexit paves way for a free trade agreement (FTA) between New Delhi and London, it might take the sheen away from India’s planned FTA with the EU. India had a lot of contentious issues while negotiating FTA with the EU. The FTAs have their problems too and there are experts who are not in favour of more FTAs. In the new situation a fresh FTA process, and that is cumbersome, may have to be started with the UK. However, now the UK could have a different view.

Brexit may have an impact on the decisions of Indian companies to invest in the future. India’s IT sector exports 17 per cent of its services, about $30 billion, to UK. The EU and UK together gives about $30 billion IT business to India

There are 800 companies from the country employing 1.1 lakh persons, have set up bases there for easy access to the EU market. Their overheads and tax payment burdens now may increase. A NASSCOM report says, “Indian IT industry is going to experience a negative influence in the short term due to Brexit.” The return of these companies is going to be affected because of the depreciation of the pound.

The deal announced on New Year eve means that about half of the $900 yearly EU-UK commerce will remain free of tariffs and quotas. However, goods moving between the EU and UK will be subject to customs and other controls and additional paperwork. It would add to cost and is expected to have other major disruptions.

Even after Brexit, British companies will have to obey certain European laws if they want to maintain access to the EU. Moreover, future autonomous British law making will not be free from coordination with the EU in order to ensure market access. A relocation of banking and primary insurance business is possible and it could hurt Britain.

The idea that India could have a better relationship with the US to make up for losses is far-fetched because Trump may be on the exit, but Trumpism – protectionist approach – is likely to continue with the new US President Joe Biden.

There is another aspect too. India is the third largest source of FDI to the UK in terms of numbers of projects. So far, India has been investing more in the UK than in the rest of Europe. The key sectors attracting Indian investment include healthcare, agritech, food, and drink.

So the question is whether the UK would be able to ignore India. Or would India for a wider EU area be focusing on moving out of Britain to have greater access to larger economies in the EU region. The pattern of the way India is doing business in the region can change. There is a perception that the UK would have to strive harder in the post-COVID-19 market to maintain its strength. In other words, it can become a smaller economy and not as beneficial to India or rest of the world as it may be perceived now. There are many uncertainties and that include whether in the event of its economy not remaining so robust could keep itself politically relevant or not.

These doubts and uncertainties dog the diplomatic community and the businesses. It may be a longer wait and watch game. If doubts turn into even partial realities the global investment trend may change. India is cautiously watching. Its prime investment – Tata groups Jaguar (accounting for Tatas’80 per cent of revenue), Japanese Toyota and BMW put down their shutters from a few days to week in November, 2019 to study the ramifications of the new deal.

The Tata motors losses have been mounting as Jaguar lost about $4.6 billion (Pound 3.6 billion) and sacking 4500 workers, it reported on January 30, 2020, that is pre-pandemic. In August, 2020 it reported JLR lost 413 million pounds till June due to COVID-19 as sales were down 70 per cent. Tatas also lost Pound 371 million in the UK’s largest steelworks at Port Talbot. Lakshmi Mittal lost Pound 35 billion and became bankrupt with Pound 130 million debts in October 2020.

Therefore, Indian-related businesses are in a tizzy in the UK pre and post-COVID-19. In 2019, 56 per cent of the UK companies were upbeat about doing business in India, the UK-India Business Council stated. Post COVID-19 despite the enthusiasm, most of these companies are not in a position to continue with their efforts for now. Interestingly, the UK is among the seven in 25 top countries with which India enjoys a trade surplus.

If businesses shift from the UK to Europe, it could be a major loss to Britain. The UK would have to ensure that despite pressure the value of the pound is maintained. For now, though, markets remain cautious on the pound’s outlook, the currency has been gaining against the dollar. This means that the Indian rupee gets devalued, import prices of goods would surge. Forex reserves have declined to $469 from $574 billion. It is likely to be strained further. Brexit is changing the world scenario in many ways, more so as there is weak global growth and the Eurozone heads for recession. India gradually would be changing its trade contours in the West and may reduce ties with the UK and increase with countries such as Germany, France and other EU countries. Right strategy is critical.

Muzzling Dissent: Ouch! Govt is touchy
Round The States
Comment