Mir Qasim and Mir Daud, the son-in-law and brother of the new nawab, took Siraj into custody in Rajmahal. Miran was on his way. In a letter to the Select Committee at Fort St George, Clive would gloat that Siraj was ‘in a distressed condition with hardly cloaths to his back, such is the misery he has been reduced to by his injuries to the English and by a general course of folly and wickedness throughout the short time he has reigned’.
Although many would—and have—contested Clive’s justification, from most accounts Siraj’s past had caught up with him yet again in the strangest possible manner. Orme writes that Siraj’s boatmen were exhausted by their run up the Ganga. They stopped on the evening of 29 June to spend the night in the vicinity of Rajmahal, which some Company correspondence and records refer to as Rajahmaul—also known as Akbarnagar for some time. Siraj and Lutf-un-Nisa took shelter in a deserted garden.
The Siyar presents a more dramatic, and different, sequence of events for ‘this unfortunate Prince, already overtaken by the claws of destiny’. The plan upon arriving on the shore facing Rajmahal was for a quick stop, just long enough to cook and eat some khichri, as his party—wife, daughter, and other ‘women’—hadn’t eaten for three days.
The Siyar says that a fakir, Shah Dana—most accounts refer to him as Dana Shah—lived in the neighbourhood (Riyazu-s-Salatin largely follows the Siyar’s version, and refers to the fakir as Dan Shah Pirzada). ‘This man, whom probably he had either disobliged or oppressed in the days of his full power, rejoiced at this fair opportunity of glutting his resentment, and of enjoying a revenge.’ Orme writes it was because Siraj had ordered the fakir’s ears to be cut off at the time of his campaign against his cousin Shaukat Jang about thirteen months earlier that he was betrayed. Orme doesn’t offer a reason for Siraj’s order to punish the fakir. Hill quotes from History of the Rise and Progress of the Bengal Army by Captain Arthur Broome, to mention Siraj also had the fakir’s nose cut off—‘…a fakier, named Dana Shah, whose nose and ears he had ordered to be cut off thirteen months before, when on his march against the Nawaub of Purneah.’
The fakir now welcomed Siraj, helped prepare food and, meanwhile, surreptitiously sent word by boat to Mir Daud and his search party in the bastion of Rajmahal that the fugitive former nawab was with him.

(As we have seen, the Siyar is sometimes drier without the footnotes of its translator, Haji Mustapha. The Frenchman doesn’t disappoint with his input about the capture, throwing in a clue that gave Siraj away to the fakir, and even offers an orientalist comment on khichri, the dish the fakir prepared for Siraj and his party, as literally an arresting digression: ‘Kichri is a mess of pulse and rice boiled together, but so, however, as that all the grains should remain asunder. It is the usual food of the poorest people in rice-countries, although there is a way of rendering it acceptable to great folks, by frying it in butter first, and then boiling the same with spices, &c.’)

According to the Siyar, the Fakir at first did not recognize the prince taking him to be one of those many travellers that daily pass that way; ‘but on casting his eyes on the very rich slippers of his guest’—this detail is repeated by numerous later-day historians and chroniclers—‘he put questions to the boat-men, who soon gave him full information’.
Orme mentions that the fakir identified Siraj at the ‘break of day’—which would suggest it was the morning of 30 June—before sending word to Mir Daud, who in turn told the troops sent from Murshidabad by his brother Mir Jafar. The news was carried by riders to Murshidabad.
Both Orme and the Siyar agree that Mir Daud and his guards arrived swiftly to arrest Siraj. Riyazu-s-Salatin’s version is that Daud’s ‘spies’ arrived to bring Siraj to ‘Akbarnagar’ from where Daud’s guards and Mir Qasim ecorted Siraj to Murshidabad.


The lost nawab pleaded for mercy, but that ‘only served to render him an object of taunt and reproach to a set of men, to whom, but a few days before, he might have disdained to speak,’ the Siyar observes, ‘every one of them he intreated to obtain a pension for him, and a corner of ground, where he might live forgotten; but no one heard him’.
Siraj’s party didn’t fare any better, according to this telling—and it is one not mentioned by others, whether for lack of information, or accuracy, or embarrassment, isn’t clear. Mir Qasim, like his peers no slouch when it came to appropriation, pressured Lutf-un-Nisa—‘partly by threats, and partly by promises’—to disclose the location of her ‘casket of jewels…the value of which could not be computed but by lacs’, and took it. Mir Daud took the cue and similarly assaulted the ‘other ladies’, and took what he could. This triggered a general loot of Siraj’s remaining possessions.
‘Every one was only intent on the opportunity now before him.’ The Siyar even offers a moralistic verse, translated with the touch of France that Haji Mustapha’s adoptive land clearly hadn’t erased:

Be this my advice to thee, if thou wilt but hear me;

If thou hast planted thorns, thou canst not expect to reap jonquils.

Orme is less fussy, never a sentimental word about reaping daffodils or any other flora:

They hurried him back to Muxadavad with the eager diligence of men who knew the value of their prize; and to recommend themselves still more to their employers, treated him with every kind of insolence and indignity compatible with the preservation of his life.

Even the capture of Siraj was touch and go. Just a few hours may have meant the difference between capture and escape. As Clive would write to the Court in London on 26 July 1757:

Monsr. Law and his party came down as far as Rajmahaul to Suraja Dowla’s assistance, and were within three hours march of him when he was taken; as soon as they heard of his misfortune, they returned by forced marches and passed Patna.

And there lies a story, we learn from Hill’s Three Frenchmen in Bengal. As Law discovered later, after Plassey was done but not quite dusted, ‘The Faujdar of Rajmehal used to stop all his [Siraj’s] messengers and detain them as long as he thought fit.’ This was unsurprising: as we have seen, the commander of Rajmahal who would play a role in Siraj’s capture was Mir Jafar’s brother Mir Daud. A letter from Siraj requesting Law to return to Murshidabad was sent on 13 June, but didn’t reach Law until the 22nd, just a day before Plassey.
The letters of Law to Siraj evidently never reached Siraj. The Frenchman started out for Murshidabad ‘at the first rumour of danger’, as Hill conveys Law’s words, but by the time he reached Rajmahal on 1 July, Siraj had already been taken prisoner and was well on his way to Murshidabad. ‘All was over,’ as the Siyar puts it.
Law wondered later, injecting his observation with a leavening of realpolitik, whether saving a Siraj on the run would have at all been worthwhile. ‘In saving Siraj-ud-daula we should have scored a great success, but possibly he would have been saved for a short time only,’ Law observed.

He would have found enemies and traitors wherever he might have presented himself in the countries supposed to be subject to him. No one would have acknowledged him. Forced by Mir Jafar and the English to flee to a foreign country, he would have been a burden to us rather than an assistance.

He concluded his observation with a damning statement about politics in the subcontinent though it could easily be applied anywhere in the world: ‘In India no one knows what it is to stand by an unfortunate man.’ Siraj would have likely been looted of whatever remained with him, the same fate as would in a few short years befall a future nawab of Bengal, Mir Qasim, during his flight westward to Awadh, and on to Delhi.
Besides, Law maintains, Siraj’s character may have again rendered him utterly without a ‘real’ friend. 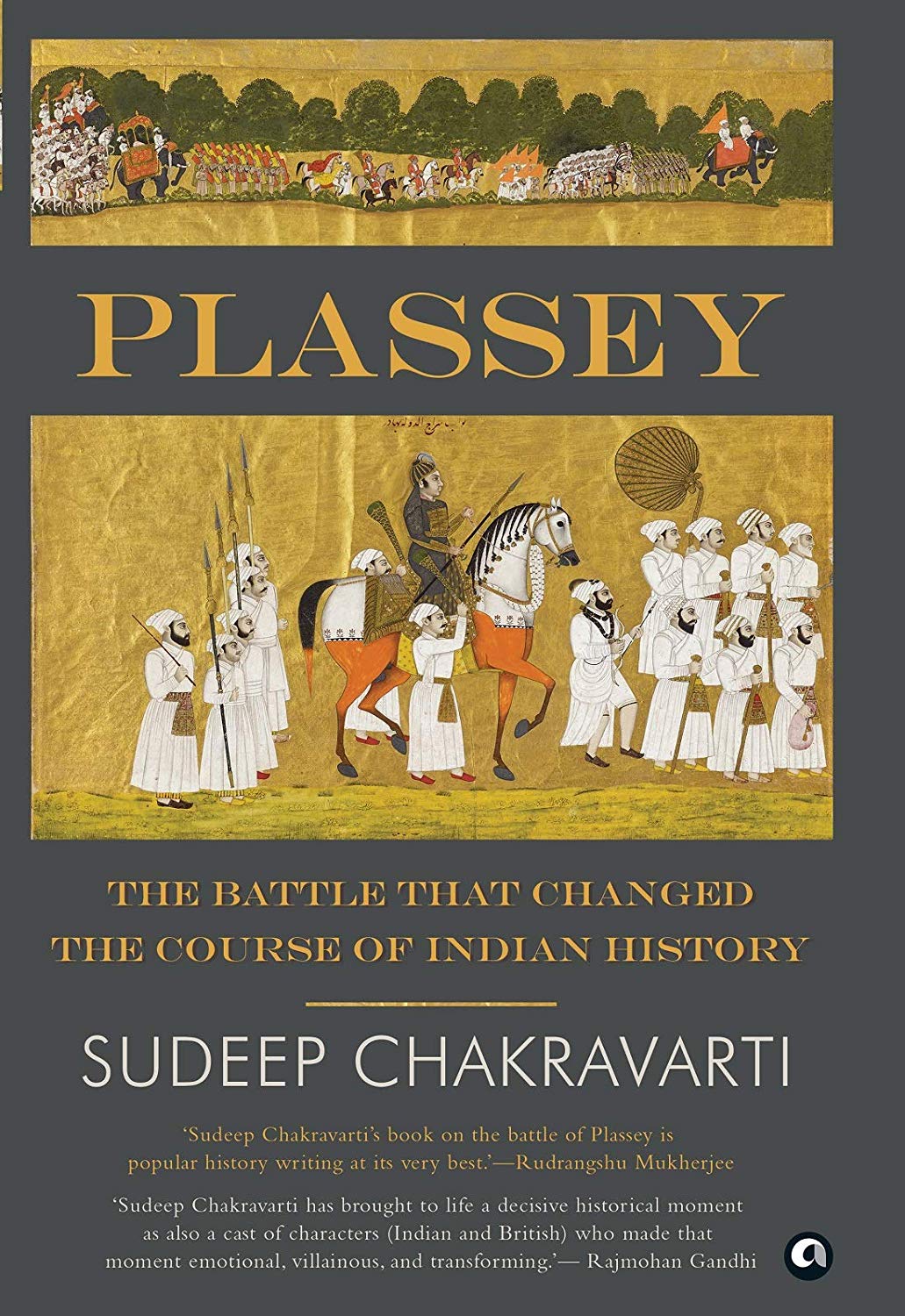 Excerpted with permission from Plassey: The Battle That Changed the Course of Indian History, Sudeep Chakravarti, Aleph Book Company. Read more about the book here and buy it here.

With new technologies and changing Hotel formats, what will travel and hospitality be like in the 2030's: Read an excerpt from Chitra Narayanan's book
Jane Borges on "Bombay Balchão": 'Revisiting the Cavel of yore was one way of keeping it alive, even if through a story'