‘Where am I?’ Kriti howled as she came back to consciousness after a few hours of unconsciousness.
Her wrists were fastened by a rope with her hands twisted backward. Her eyes were blindfolded and waist and legs tied with a chair, so she could not walk.
‘Calm down, Princess. You are being kidnapped!’ I said in a grim tenor.
‘What rubbish! Do you even know who my dad is?’ she chided as if I am one of her servants. She has this debauched routine of chastising her domestic help right from her babyhood.
‘My dad is the Home Minister you scoundrel. You will rot in jail for the rest of your life,’ she shrieked again trying to unshackle herself.
‘You think I don’t know your dad? I have abducted you only because you are the Home Minister’s daughter.’

I strolled close to her and slapped so rigidly on her cheeks that she fell down with the chair on which she was fastened. I lifted her back along with the chair.

‘My dad won’t let you go, you motherfucker bastard,’ she bellowed.
‘I have decided to kill myself after I rape you,’ I snorted with laughter. ‘Do you think I will have any trepidation from your daddy or the police?’ I smacked her again, this time on another cheek.
‘Please don’t do this,’ her voice softened. ‘I will give you any amount of money you ask for,’ she was shivering because of fright.
I cackled with laughter again, ‘There are no pockets in a shroud sweetheart. What will I do with the money, when I die?’
‘If you don’t need ransom money then why you have made me a hostage?’ she asked the clever question.
‘Because I want to attest something.’ I drank water from the flask kept near me with slow glugs. I was too drowsy and ravening.
‘What?’
‘That this city is so perilous. If somebody could abduct the Home Minister’s daughter then nobody is safe here.’
‘I want water too,’ she interrupted me. She might have heard me sipping.
‘You want water?’ I repeated. She nodded grimly.

I unlocked the lid of the flask and went near her. I grabbed her jaw firmly with my left hand. She opened her mouth to take a sip, but I splashed all the leftover water in the flask to her face. It drenched her black shiny crop top making it nearly transparent.

‘Do you ponder yourself my guest to drink water here?’ I barked. She got petrified.
I rested in my chair keeping quiet for a few minutes. It is tedious to kidnap somebody.

‘Nobody gives a fuck about anybody else in this city. Last night, I mixed pills to your drinks which caused you to feel dizzy. I mixed the same analogous drugs to your driver’s beverage, wore his uniform and took his seat in the car. You got into your car and asked me to take you home and became unconscious because of the drug. I drove your BMW and brought you here.

‘See, how trouble-free it is to kidnap a girl in this city. Not even one person is interested in knowing what is going on. This garage was locked for ages, but there is no neighbor to inquire who came here last night. This city is so insensitive. Nobody gives a damn.’
A long-tailed rat crossed over her feet startled her. The pungent smell of rat poop filled in the air.
‘The “date rape drug” which I used is also effortlessly obtainable, and the adversity is I came to know about it by just doing a Google search writing how to rape a girl.
‘It has no color, fragrance, or taste so can be mixed to any beverage without the prey knowing about it. It makes the prey become feeble and topsy-turvy or even swoon over in some cases, so he or she cannot repudiate getting into physical relation.
‘Your dad might not have identified till now that you got abducted. Why is everybody so ignorant about crime? People shoot it happening in their mobile phones, make it viral but nobody tries to thwart it. And then they do candlelight vigils to oppose it.
‘Police come to scrutinize after the felony already befalls and if they hook the illicit, they accept it as a mammoth accomplishment.
‘Is it really an accomplishment? Will the lifeless soul become alive if the police will hook the executioner?
‘Police ought to thwart the crime before befalling. What difference does it make to the person who got executed if the police will catch the executioner or not?’
She wasn’t protesting anymore, was listening to me quietly. She discerned that she couldn’t do anything to escape. She accepted her defeat from me.
‘Who are you?’ she asked me abruptly. ‘Do I know you?’
‘I am not certain if you know me or not, but yes we have met before, in your dad’s office.’
‘I want to see you,’ she begged.
Slapping her twice somehow mollified my resentment. I agreed and untied the cloth wrapped to her eyes. She fluttered her eyes a few times and then gradually adjusted to the blurred light.

Before looking at me, she seized a panoramic view of the whereabouts, so she could make out where she was kept but it was dusky far and wide. The light from the small bulb dangling above her skull was proficient to illuminate only a limited space.

She observed me prudently for a few moments trying to distinguish me and then screamed, ‘You?’
‘Yes me. Why do you look stunned looking at me? Don’t you consider me capable of abducting you?’
‘But you were a sophisticated Software Engineer. What made you a… a…’
‘A Criminal,’ I completed her as she was probing for words. She nodded.
‘Because I fucking don’t know what I should do. My fiancé killed herself; I lost the love of my life. I went to the police to get justice for her, but they didn’t even pen my complaint.
‘I went to the Home Minister’s office with a vivid notion to sojourn delinquency but there you and your daddy sniggered at me.
‘After that, I didn’t want to live anymore. I wished to assassinate myself. I was going to do suicide, but then I thought it would be better to teach your daddy a lesson before I succumb. Your daddy adores you a lot, now he will cognize how it feels when we lose our loved one.
‘I seek revenge from you and your daddy. And I can’t think of any better way of doing it than to rape you and kill you.’
‘I am so sorry,’ she said in a wobbly voice.
‘Isn’t it too late to realize your blunder?’
‘And I am not a “Jobless Engineer” what you have cited before. My company is worth Rupees 170 Crores. It is more money than your crooked politician daddy has ever collected doing corruption.’
Rage clouded my mind again. I tossed the empty water flask at her.
‘Ouch,’ she whimpered as the bottle whack her lower limb and fell on the floor.
‘I regret I couldn’t comprehend the brutality of the crime earlier,’ she started crying, maybe because she realized her mistake or maybe because of the twinge in her leg.
‘Do you know how it feels to be a rape victim?’ I asked her.
She didn’t retort.
‘Life becomes a living hell,’ I started explaining her.
‘Every fucking individual will gawk at you as if you are the rapist.
‘Each time you will take off your attires to take a bath and see yourself in a mirror; you will hate your body because it was devoured by the rapists. Whenever you will cross any street, the bare eyes of men sitting there will rape you over and over in their thoughts. It isn’t facile to stay alive. Not a single eligible bachelor will marry you.

‘Apart from all this, you said rape is too common to worry about, and you won’t waste your time thinking about it,’ I said gnashing my teeth and searched for something to throw at her again but found nothing.

‘Please let me go, for the sake of your love,’ she pleaded looking at me.
‘Love? This word doesn’t sound decent from your mouth. Do you even know what love means? Do you have feelings?’
‘Okay, consider I don’t love anyone, and I don’t have feelings. But what kind of love you do, which ended up making you a criminal?’ rage filled in her eyes too. She wasn’t afraid of me any longer.
‘Do you think your fiancée would be pleased in heaven to see you raping a girl?’
I gasped for air, said after a pause, ‘I wouldn’t be doing this had your daddy didn’t kill my fiancée.’
‘My dad killed her! How?’
‘He is the Home Minister of the state, accountable for the protection of citizens. And because he isn’t doing his duty suitably, my fiancée had to kill herself. Who do you think is guilty?’
She chose to keep silence. You cannot argue with your kidnapper.
‘How have you decided to kill me?’ Well, that’s a weird question to ask your kidnapper.
‘Have you thought of a way or will you search it on Google too, Mr. Techie?’ she grinned diminutively.
I stood silent.
‘Tell me about your Trisha. How was she like?’
‘Why do you want to know about her?’
‘I am just curious to know. She must be so special that her love turned a hotshot techie into a rapist.’ It felt awkward when she called me a rapist. I hadn’t raped her yet.
‘Yes, she is special.’
‘Please tell me about her, consider it my last wish before I die.’

The mere mention of Trisha melted my heart. I sat in my chair relaxed and started talking to her as if she was my friend. The fear of death vanished from her face. She was so curious to know what actually turned a hero into a villain.

‘From where should I begin?’
‘Begin it from the beginning. I am not in a hurry to die, anyway.’ 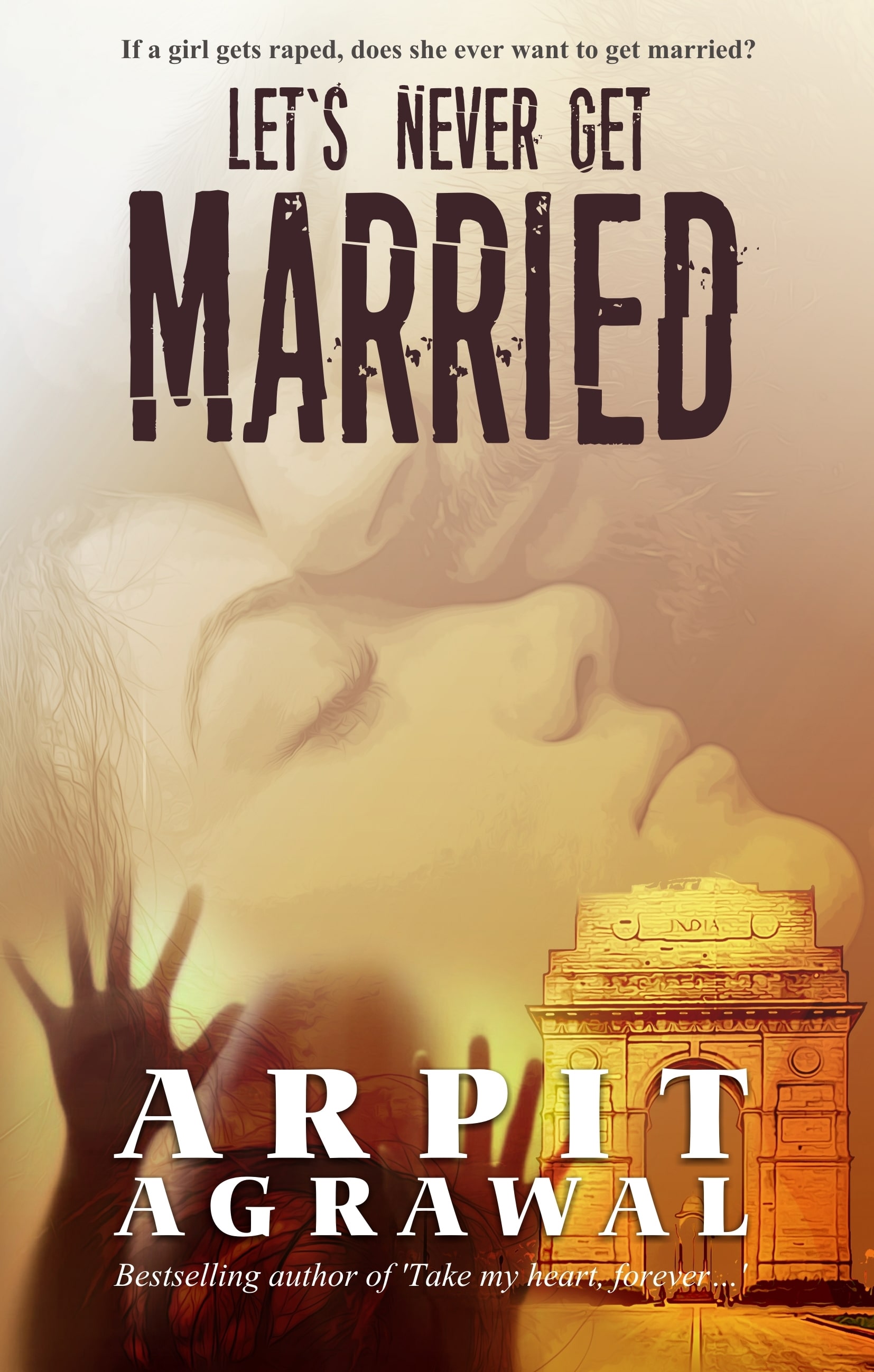 Excerpted with permission from Let’s Never Get Married, Arpit Agrawal, Anjuman Prakashan. Read more about the book and buy it here.

One of India's most influential and powerful statesmen of the 19th century, Sir Salar Jung I decisively shaped Hyderabad's political and economic history for the three decades he was Diwan
Book Excerpt | Hijab: Three Indian doctors working in a small American town navigate issues of identity, immigration and belonging in Guruprasad Kaginele's novel