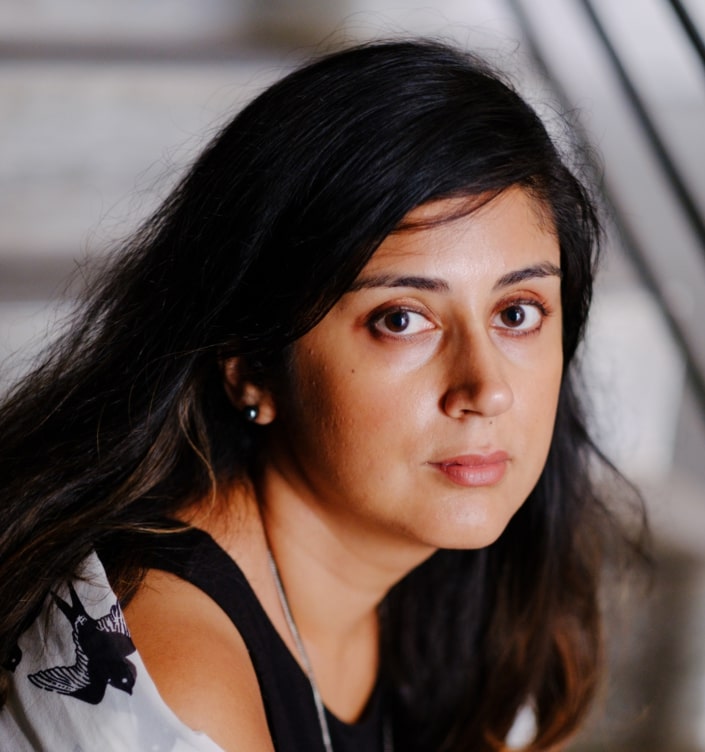 It was an established rule in their household that books—and all documents containing pages and words—were not to be stepped on. Magazines were tucked away under the coffee table lest somebody’s feet touch them. Stray newspaper sections were always neatly arranged, folded and stacked like fresh laundry. But in the days leading to his departure for America, a distracted Narain left brochures and forms all over the floor. He got from his door to his bed by tiptoeing around the edges of the room.

One afternoon, his sister stood in the doorway, her own toes perilously close to his papers. “You look like a pondan,” she said. It was a word people used to describe men with shrill voices who walked like they were dancing, hips unhinged.

Narain ignored her. Amrit sang the word and mimicked his movements. He made a sudden leap to hit her but she moved out of the way with a squeal. Stepping back to regain his balance, his heels grazed the Iowa State University course catalogue.

“I wasn’t bothering him.” He heard her protesting outside as he knelt to kiss the catalogue. If somebody stepped on the printed word, house rules required a tender apology. The rules were inspired by Father’s view that stepping on education was the ultimate display of disrespect. It brought terrible luck to a person. In his childhood, Narain remembered watching his brother Gurdev kneel and pray for accidentally knocking a Holy Book onto the floor. “You never put sacred words where somebody could trample on them,” his father had shouted. Not even Amrit was excused from breaking this rule.

Narain gathered his papers and pulled the two old suitcases out from under his bed. He still had a week; it was not necessary to pack now, but there was little left to do. Father would enter the room occasionally to read through the brochures and murmur words of encouragement. Gurdev’s wife Banu had helped by doing her own sorting—she searched the island for its weight in bay leaves, padded clothing and powdered drink mixes. Every week she arrived at the house to deposit items that would only add bulk to his already overloaded luggage. “They’re for you to take there,” she said. She showed little care to know the name of the state he was headed to; like everybody else in the family, she spoke of America only in vague terms. There.

In secret, Narain had allowed himself to be more sentimental about his departure. He had purchased a book of photographs of Singapore, and made a project of fastening family photos to selected pages. A portrait of his unsmiling parents was placed against a bare sketch of crammed shopfronts on the banks of the Singapore River. A candid family shot taken during Gurdev and Banu’s wedding was clipped to close-ups of mangosteens and papayas bursting with festive ripeness.

Amrit was allowed to help fill a smaller suitcase kept in the storage closet. The night before Narain left, she came to his door and reminded him not to forget it. The note of concern in her voice was touching. She lingered outside the room, her eyes roaming over the bare walls. Narain knew he would miss her the most, but he caught himself before saying something. This was exactly the sort of weak behaviour he was expected to shed in America.

A smirk formed and spread across Amrit’s lips. “When you’re gone, this room will be mine.” He glared at her but decided against taking a swipe. Amrit giggled and dashed down the corridor. He heard her feet slapping across the wooden floors for a while before the house settled into a gradual silence.

Narain had already picked out an outfit for the aeroplane and Father had made arrangements for a bus to bring family and friends to see him off. Leaving for America would be a grand occasion but Narain could not feign pride or excitement. The only reason he was going so far away to study was because of what had happened when he was in the army. There was no way to undo that shame but he could disappear for a while and return with a degree, a form of recompense for the damage he had caused to Father’s reputation. “You will go to America to study engineering.” Father had pronounced this fate with such certainty that Narain could only accept it.

Evenings mellowed the Naval Base streets. Palm trees hunched closer to the ground, burdened by heavy shadows. In the distance, stray voices flashed through the air like lightning, followed by the hum of crickets gathering to a steady harmony. The wind sighed through a crack in Narain’s window, making the loose pages of the catalogue skitter across the floor. He picked up the pages and brought them to the living room to add to the stack of old newspapers. The karang guni man would arrive to collect them tomorrow, the coins in his pouch jingling to the staggered rhythm of his walk.

Narain had to arrange the papers carefully, placing thicker stacks on top of the single sheets to avoid scattering. On his hands and knees in the dark of the living room, he glimpsed two feet, darting like fish beneath the curtains. “Who’s there?” he called. No answer. He inched closer to the window and saw the shape of a teenage girl. “Amrit, come out.”

Amrit stepped out from behind the curtains, grinning. “I’ll get to keep all the money from the karang guni man when you go,” she said. A streak of moonlight illuminated the panic she failed to disguise. She had been trying to sneak out of the house through the window again.

Excerpted with permission from Inheritance, Balli Kaur Jaswal, HarperCollins India. Read more about the book here and buy it here.